"Republicans are not in any way serious about criminal justice reform or ending police brutality": Michael Fortner on race, the Clintons and the crime bill

Some of Bill Clinton's defense of the crime bill is true, the author of "Black Silent Majority" tells Salon 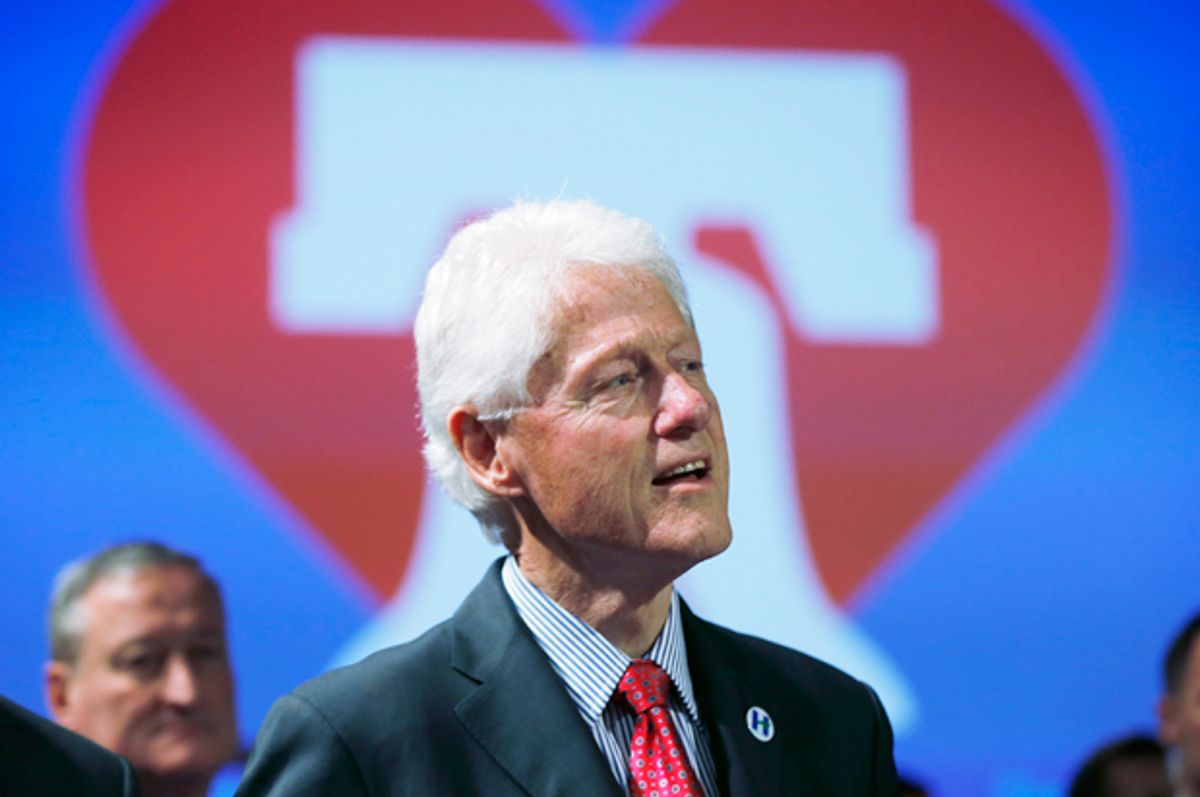 Several weeks ago in Philadelphia, former president Bill Clinton confronted protesters who were critical of his 1994 Crime Bill and its role in the mass incarceration of African-Americans. That moment was part of a larger pattern. During the 2016 presidential primary campaign, Hillary and Bill Clinton have faced repeated protests from “Black Lives Matter” activists and others who are concerned about America’s prison-industrial complex, and the role that racism and classism plays in the country’s criminal justice system.

I recently spoke with Michael Javen Fortner, Assistant Professor of Political Science at CUNY and the author of the book "Black Silent Majority: The Rockefeller Drug Laws and the Politics of Punishment," about the Clintons and the 1994 Crime Bill, “the New Jim Crow,” black respectability politics, African-American political agency, and the challenge of “Black Lives Matter” in the Age of Obama.

As I watched Bill Clinton’s exchange with the “Black Lives Matter” protesters in Philadelphia several weeks ago, I immediately thought of your book "The Black Silent Majority." What was your response to Bill Clinton’s behavior at the Philadelphia rally?

I had two reactions. One was that Bill Clinton is obviously out of practice and he continues to be amazingly thin-skinned. In terms of a political performance he acted badly. I thought he was condescending and way too defensive. I also thought it was strange at first, because he also has in the past repudiated some of his anti-crime strategies. His wife also gave a speech on the era of mass incarceration saying that it needs to end. So Bill Clinton’s attitude and posture towards the protesters given all those factors seems strange and unwise.

My second reaction to Bill Clinton was that there was some truth to what he was saying. The part where he suggested that he had been hearing from African-American groups and individuals that the federal government needed to do something about crime in the streets and that their children were dying was largely correct.

Many people, scholars included, do not believe that African-Americans would respond to crime in their neighborhoods by advocating or supporting “tough on crime” policies. They are just wrong on that. It is an easy empirical question to answer. Go back in time and examine survey evidence. Did African-African Americans support “tough on crime” policies? The answer is “yes.” There is one Los Angeles Times poll which showed that nearly 70 percent of African-Americans supported “three strikes you’re out.” A little over 70 percent supported treating juveniles who committed crimes as adults. Those patterns were repeated in other surveys.

Ultimately, I believe that many people who are critical of Bill Clinton simply do not believe that black people would respond in this fundamentally normal way to crime. And because of that disbelief they direct all of their ire towards Bill and Hillary Clinton. There are many more people implemented in the development of “tough on crime” policies and they need to be scrutinized—including African-Americans.

How do we parse the support of black elites for the 1994 Crime Bill for example (or the earlier Rockefeller Crime Bill) and how the rank and file members of the African-American community felt about those policies?

This is another crucial point. Analytically and conceptually we need to distinguish between “regular folks” and political elites. It is possible that although black elected officials may claim to represent the black public, their constituents, and not share their preferences on every issue. Black elected officials may have their own ideas and be shaped by other pressures and influences.

What I found with the Rockefeller Drug laws and my review of the 1994 Crime Bill was that there were a good number of black elected officials who were farther to the left on these issues than the people they represent. They tend not to be as punitive as the people living in those communities who have to deal with crime on a day-to-day basis.

How do you think that disconnect is influencing the ways that “Black Lives Matter” and other groups are responding to the Clintons and the 1994 Crime Bill?

There is a narrative which has developed that is very alluring while also being very painful. In this story, mass incarceration, the modern carceral state, is simply something that just happened to black people. Moreover, that mass incarceration is simply an act of white supremacy on black folks. Of course, we should never forget or overlook how our criminal justice system is embedded within racial structures and impacted by negative racial attitudes on multiple levels. But, these are also very complicated political and bureaucratic dynamics at play. Because so many people have grasped onto how black people are the victims of these processes, as opposed to having any role in them, critics immediately criticize white politicians and other elites.

Of course, in some sense, they should. We should never stop fighting racism in the criminal justice system. But too narrow a focus makes the political and moral argument too simple. For example, if a black person is in jail only because a white supremacist drug policy was put in place the solution to his predicament is very simple. Let him out. But, what if a black person is in jail because they participated in illegal activities, violent crime especially? You now have a harder political and moral argument to make.

This is the harder case. I think that many people ignored violence when theorizing and writing about crime policy because they didn’t want to get into that hard question. What do we do when African-Americans are killing other African-Americans? The response now is to say that black folks don’t want more policing and harsher crime policies to stop that. In this narrative, black folks also want preventative policies, social programs, and support gun control. My argument is that both things are correct. Yes, African-Americans are more likely than whites to support prevention, gun control, and more investment in urban communities. And African-Americans also want immediate relief from the crime in their communities.

How do you think “black respectability politics” play into discussions of mass incarceration and the “Black Lives Matter” movement?

How has Barack Obama’s tenure complicated these discussions of mass incarceration and police brutality?

I feel that it has made discussions of these issues quite difficult. I have an intuition that if the president was white, there would be more vigorous mobilization and critiques against the White House on these issues. Those on the Left have offered those criticisms. But, having a Democratic, black, president makes it difficult for black folks to mount a mass movement on those issues because there is a deep desire for Obama’s administration to be remembered as a success.

Allowing for that complexity, what Black Lives Matter has done is amazing and should be applauded. It is beautiful. Black Lives Matter has forced a nation to recognize the humanity of black people and the value of our lives. Now, when you get the ear of Power, what do you whisper to Power, especially behind closed doors about your specific policy concerns? This is the essential question.

The phrase “the new Jim Crow” is commonly used in these conversations about the 1994 Crime Bill and the Clintons. I worry that the language of “the new Jim Crow” is a victim of its own success and has been used by many people to obscure the complexities of race, crime, class inequality, and mass incarceration. Am I wrong?

I think you are absolutely right. It is a victim of its own success. Michelle Alexander should be applauded. No one, not one scholar or activist has done more to bring attention to the evils of mass incarceration than Michelle Alexander. Part of her success is the title and how it frames the conversation. The title has galvanized people around the idea that these policies have created a new racial caste system. In many ways this is correct. The prison system can exist to maintain racial and economic inequality. In my opinion, there is insufficient attention to class in Alexander’s narrative. But that is simultaneously the power of the language and thesis of her book. The phrase “the new Jim Crow” often ignores the complexity of the policy making process. There are many different interest groups, policy actors, and moving parts that create crime policy. The language “the new Jim Crow” blinds some people to the other factors that have impacted mass incarceration, especially the impact of crime on many black and brown people who live in dangerous communities, and their mobilization for greater public safety.

Do you think that there is a generational disconnect between Black Lives Matter and other youth activists who are critical of Bill Clinton and the 1994 Crime Bill, given that many of them came of age in a moment of record low crime rates, as opposed to the national emergency that was violent crime during the late 1980s and early 1990s?

Yes, there is a generational divide. Many of those activists, and others, who either were not alive or did not live in those high crime areas during that era, have no sense of how crime effects someone’s life, the way that violence structures everything in your day from how you to go work, where children got to school and play, worship, and other decisions. Critics may look at the macro level data and completely ignore the devastating day-to-day consequences of crime that many communities experienced because of the drug trade and its related violence. This context is often missing from conversations about mass incarceration in this moment because the present has seen such dramatic reductions in crime.

We need to pay close attention to that paradox. It shows just how disturbing that the late 1980s and early 1990s were relative to crime, people understood just how brutal the police could be, yet turned to that same police force to save them. It behooves us to understand that moment as we try to move forward with the mass incarceration debate.

Do you think that the controversies surrounding Bill and Hillary Clinton and the 1994 Crime Bill, as well as mass incarceration more generally will influence the 2016 presidential campaign going forward?

The dynamics of having two nominees, particularly if they are Hillary Clinton and Donald Trump, will marginalize those issues. What has moved those issues to the forefront is intraparty competition within the Democratic Party for black votes. During the general election, people on the Left will have a stark choice. Republicans are not in any way serious about criminal justice reform or ending police brutality. The Democratic nominee has promised to be better on these issues. This dynamic may silence these discussions a bit. Or hopefully, Black Lives Matter will keep pushing and force the Republican nominee to defend the country’s draconian and awful crime policies that have sent too many African-Americans—and some whites—to prison for far too long, and many for nothing at all.