Bobby Jindal's Trump illogic: The billionaire's unserious and a threat to democracy — but at least he's not Hillary 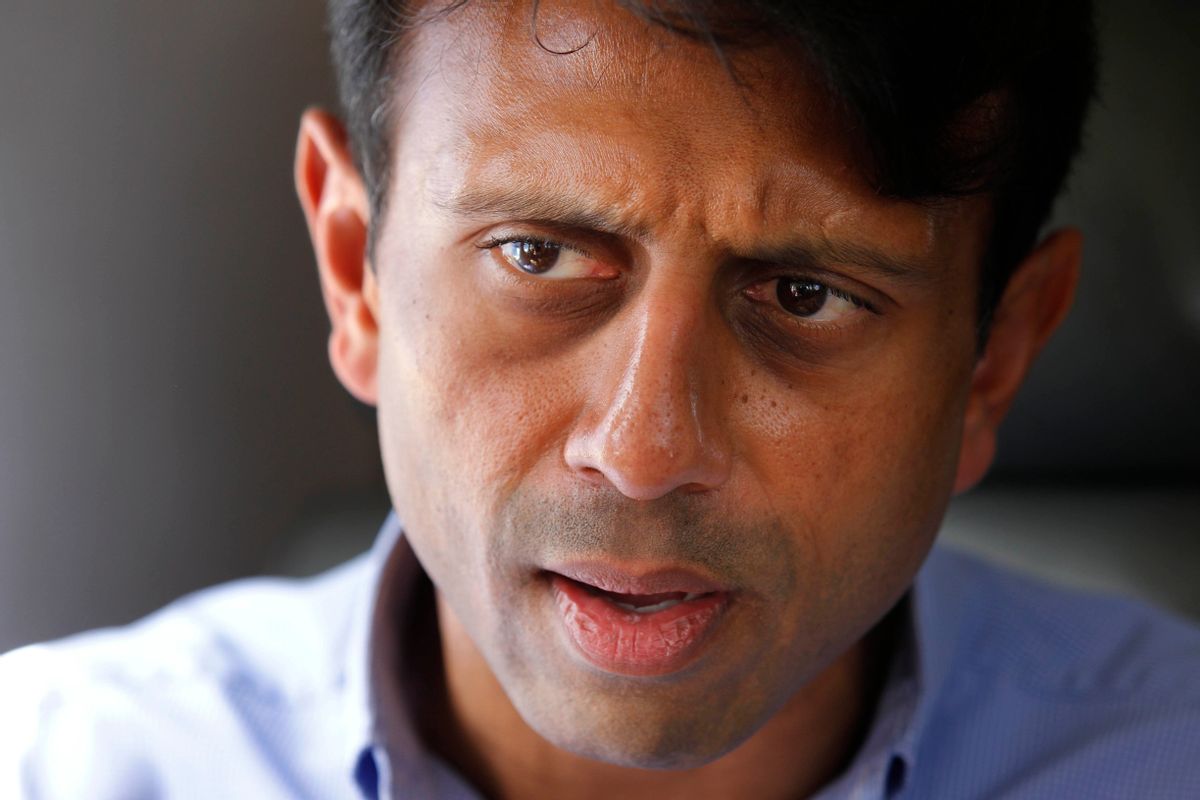 FILE - In this July 20, 2010 file photo, Louisiana Gov. Bobby Jindal talks about the oil spill as he flies over the Deepwater Horizon oil spill site in the Gulf of Mexico, off the Louisiana coast. Jindal left the governors office nearly two months ago, but his legacy permeates a special legislative session aimed at digging Louisiana out of deep financial troubles. Criticism of Jindal is bipartisan and widespread, with irritated lawmakers left sifting through the highly-unpopular choices of raising taxes or taking a hatchet to higher education and government services. (AP Photo/Gerald Herbert, File) (AP)
--

In the course of his own sad little campaign for the White House, former Louisiana governor Bobby Jindal had tried to insert himself into the national conversation by savagely attacking Donald Trump. Jindal called him “unserious,” an “unstable narcissist,” “full of bluster,” and said he “lacks the intellectual curiosity to even learn.” He likened Trump to Charlie Sheen and Kim Kardashian and described the frontrunner’s initial dominance of the polls as “the summer of silliness.” Jindal also lashed out at other Republican candidates who cozied up to Trump, like Ted Cruz. “I think he's hopeful that those anti-establishment votes will go from Donald Trump to him,” Jindal said of Cruz. “but there's a point at which you've got to put principle above political expedience, and I think this is one of those cases.”

And now, this same Bobby Jindal has announced that he’ll vote for Donald Trump for president.

Writing in The Wall Street Journal, Jindal explains that he stands by every past criticism he leveled at Trump, but he’s still going to support this unstable and incurious narcissist whom he once opposed on principle because, for all of Trump’s failings, he is still better than Hillary Clinton:

I think electing Donald Trump would be the second-worst thing we could do this November, better only than electing Hillary Clinton to serve as the third term for the Obama administration’s radical policies. I am not pretending that Mr. Trump has suddenly become a conservative champion or even a reliable Republican: He is completely unpredictable. The problem is that Hillary is predictably liberal.

“I have no idea what Mr. Trump might do, while Mrs. Clinton is predictable. Both are scary, the former less so,” Jindal writes.

This strain of logic, if it can be called that, is going to pop up more and more as Republicans and conservatives get over the initial shock of Trump’s victory and start feeling the familiar pull of partisanship and prejudice. What we’re seeing in Jindal’s tortured anti-endorsement of Trump is an expression of the conservative movement’s unshakeable belief that Hillary Clinton is a uniquely malignant political force.

The anti-Clinton sentiment is so strong and so pervasive that it overwhelms literally every other consideration. In the Journal piece, Jindal acknowledges that Donald Trump is not qualified for the presidency, and he writes that he has no idea what sort of policy platform he’d pursue or what type of judge he would nominate to the Supreme Court. Last September he wrote an anti-Trump op-ed warning that if Trump “were somehow to win, we have no idea how he would govern.” Now he’s signing up in support of the Trump Mystery Presidency because he’s convinced himself that there literally can be no worse president than Hillary Clinton.

This is a poisonously illogical argument that gives cover to the fact that the Republican Party’s presumptive presidential nominee doesn’t have any real idea of how the presidency works, how governments work, how national economies work, or how policy is made. As Ryan Cooper writes, a number of the policy proposals Trump has ticked off seem pretty smart to him, but to implement them he’d either have to break the law or needlessly provoke an international economic crisis. You can’t just waive all this off and say “well, at least he’s not Hillary” and pretend that you actually give a shit about the health of American governance.

But that is how it’s going to go down for a lot of Republicans and conservatives. They’ll see a choice between Trump and Hillary, and even as they recognize, as Jindal does, that making Donald Trump president could have catastrophically damaging consequences, their partisan lizard brains will make it impossible to do anything that would enable the election of the woman who "murdered" Vince Foster.