Embrace "The Good Wife"’s final slap: A happily-ever-after ending would have been the show’s biggest betrayal

The finale left a lot of viewers wishing for a more conventional resolution, but it was the right note to end on 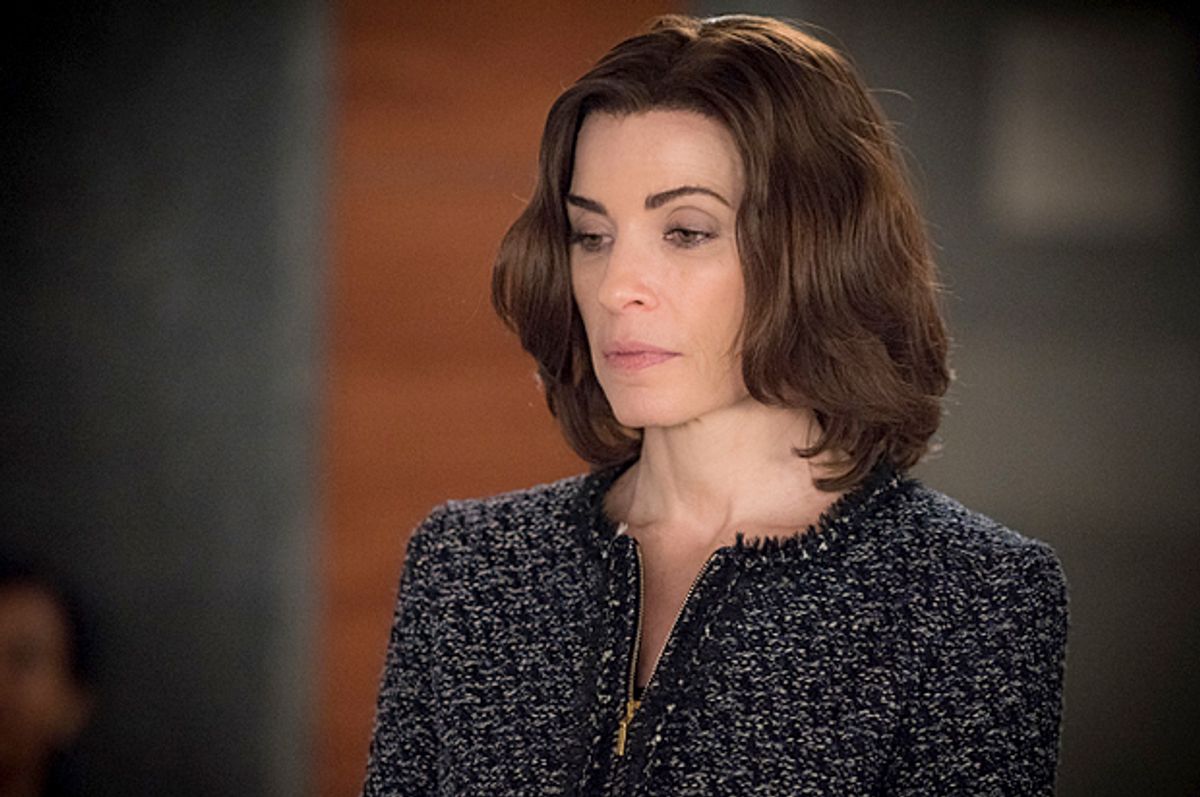 For many viewers, “The Good Wife” finale was a literal slap in the face. In recent weeks, the acclaimed CBS procedural teased the resolution of its core love triangle: Would Alicia Florrick (Julianna Margulies) wind up with Jason (Jeffrey Dean Morgan), the sexy investigator with whom she is having an affair, or Peter (Chris Noth), her unfaithful husband? Her marriage is, at this point, one of convenience; Alicia and Peter need each other for political gain. Peter recently mounted a failed attempt at the presidency, while his estranged wife made up with her mentor-cum-rival Diane Lockhart (Christine Baranski) to start Chicago’s first all-female firm. The undertaking was a longtime wish of Diane’s, one repeatedly teased in earlier seasons.

But “The Good Wife” is not a show about dreams fulfilled. In its final moments, creators Robert and Michelle King exploded these reveries, as well as any conventional resolution for its characters. The show frequently reminds us there are no easy answers. After a fantasy where Alicia consults the advice of Will (Josh Charles), her now deceased lover, she goes to Jason and asks him to wait for her. The closing scene is another dreamlike sequence in which Alicia chases a darkened figure down a hallway, believing the shadow to be the man with whom she hopes to start a new life. Like many things in “The Good Wife,” he is not who he appears to be.

In a show that was no stranger to controversy (especially in regards to rumors of a behind-the-scenes feud between Margulies and former co-star Archie Panjabi), what happened next may prove to be its most divisive scene. Alicia turns around to face Diane. The two women share an extraordinary amount of history, a past littered with double-crossings. The program’s final season opened with Alicia, now working for herself, giving legal advice to Howard Lyman (Jerry Adler), an aging partner hoping to bring a suit against Lockhart-Gardner. Diane discovers this and confronts Alicia at her home. “It’s not what it looks like,” her former colleague assures her. Diane reminds her that sometimes, it is exactly what it looks like.

During “End,” these repeated slights build up to a moment of ecstatic violence. In order to keep her husband out of jail, Alicia again double-crosses Diane by revealing her husband’s infidelity in court. Diane’s husband, Kurt McVeigh (Gary Cole), is a ballistics expert whose testimony will undercut the defense in Peter’s corruption trial. In order to destroy his credibility, Alicia and her co-chair, Lucca (Cush Jumbo), question him about his affair with a colleague, Holly Westfall (Megan Hilty). The moment humiliates Diane, who has lost both a husband and a friend. After Peter accepts a plea deal, she shows up to his public address. Rather than voicing her frustration with the woman that Alicia Florrick has become in the past seven years, Diane strikes her associate across the face. The blow is so shocking that Alicia immediately tears up.

The long-simmering confrontation between the two was the slap heard around the Internet, with many lamenting that one of television’s most explicitly feminist shows devolved into a catfight between two women. At Variety, the great Maureen Ryan craved romantic closure for its flawed heroine. “ The Good Wife’ can't give me that swoon-y Alicia-Jason romance and then expect me to not want her to smooch Jason one more time,” Ryan wrote. “Am I made of stone?” The fan outcry was so massive that the Kings issued what may be the swiftest mea culpa in TV history. “We’re sorry if anybody’s thrown,” Robert King told Variety.

As King reveals in the Variety interview, the writers hashed out a number of different scenarios for the finale. In one version, Alicia finally embraces her happiness as she races into the arms of a lover—although Robert King neglects to say whom. He calls this the “usual running to the airport scene.” “We just thought that would be happy-making in the moment but it didn’t feel a wrap up to the seven seasons,” King said. “And that seemed more important.” According to the Kings, the finale was designed to answer a more important question: Alicia Florrick has survived her husband’s humiliating infidelity scandal, his later imprisonment, the death of her lover, and a forced resignation for the race of State’s Attorney after allegations of voter fraud. How have these events changed her?

To illustrate that theme, the Kings engage in a clever bit of parallel construction: “End” is a distorted mirror image of the show’s pilot. Seven seasons ago, Alicia “stood by her man” as so many political wives—including Huma Abedin and Hillary Clinton—had before her. During Peter’s final address, when he steps down from the governorship, she is not the ruined woman she used to be. Alicia stands apart from him. The series’ opening shot was the couple’s clasped hands, united in a gesture of support. When Peter grabs for once more, she rejects him and walks away. It was previously Alicia who struck her husband, after his affair with a call girl made their family a constant fixture in the news cycle. This time it’s Alicia who is the agent of betrayal.

The finale might feel like a bait and switch for those who hoped that “The Good Wife,” after putting Alicia through the ringer for so long, was finally allowing her that most elusive of emotions: happiness. The Kings, however, make it explicit that was never in the cards. During her chat with Will, her old flame reminds her of something she used to tell him about their thwarted liaison: “It was romantic because it didn't happen.” “End” further acknowledges the fictiveness of romantic resolution when Alicia tells Will that she doesn’t believe Jason is the one; that opportunity has already passed her by. “Jason's not you,” she sighs. The program itself was a series of constant near-misses—calls never returned, friendships that never quite materialized, and partnerships that fizzled as soon as they materialized.

To focus on the show’s central romance is to ignore the fact that its romance was never all that central; finding love often appeared at odds with the show’s core themes. More than anything, “The Good Wife” was about human frailty. If the show was set in the world of Chicago politics, the people at its center were just as corruptible as their surrounding environment. The program’s most recent seasons, in fact, have pushed the boundaries of its title: How much could Alicia become tainted by everything that she had seen and still think of herself as fundamentally moral and just? In order to escape Peter’s shadow, she had to become like him.

Recent episodes have emphasized just how little the calculated, cynical Alicia Florrick of today resembles the woman we met in the pilot. During the series’ penultimate episode, “Verdict,” Louis Canning (Michael J. Fox), a crooked man Alicia frequently refers to as “the devil,” presents her with evidence that her husband may have had even more affairs than she knows about—including with a coworker, Geneva Pine. She has no reaction to the news, and Canning is confused by this. “You heard what I just said?” he asks. Alicia is unmoved. “Were you wanting me to cry, Mr. Canning?” she responds. Alicia begins to pantomime a teary-eyed breakdown: “Oh my god, I thought my husband no longer cheated.” Canning, a professional manipulator, recognizes a kindred spirit blossoming before him. “God, I love you,” he says.

If the touch-and-go friendship between Alicia and Canning highlights her moral miseducation, there’s a terrific moment earlier in “Verdict” that perfectly underscores that theme. “It's a terrible thing when someone loses their moral compass,” the prosecuting attorney (Matthew Morrison) states during his opening argument in Peter’s trial. “It starts with a small infraction, something insignificant. Then it's followed by two more infractions, because the first one has long been accepted as justified. Then, like a pyramid scheme of moral laxity, the lies become misdemeanors, the misdemeanors become felonies, and the felonies become a way of life.” The speech is directed at Peter, but the same could be said about Alicia.

If “The Good Wife” ended on a note befitting “Breaking Bad,” some of its instrumentation was more than a little off-key. As Ryan—and many others—have pointed out, the discovery of Kurt’s infidelity is a plot hole for which the show never accounts. “How did anyone know about that affair?” she asks. “When did Alicia or Lucca find out?” Usually the show employed its leather-clad investigator Kalinda Sharma (Archie Panjabi) to answer for these reveals; the fans called this trope the “deus ex Kalinda.” Panjabi, however, infamously left at the end of last season following the aforementioned bad blood. In the final season of “The Good Wife,” the program is not only lacking its moral center—especially after so many of the characters that kept Alicia grounded have passed on—but it’s also missing its “Get Out of Jail Free” card.

The show’s messily unromantic finale, however, was a reminder of everything the show was really about. Maybe she will run away with Jason or decide to stay with Peter. As Jason reminds her, Alicia does like to be needed. Perhaps she will accept Eli Gold’s (Alan Cumming) plan to launch her own foray into politics or even go back to the office and mend fences with Diane, who must be used to that sort of thing by now. But as “The Good Wife” made its closing arguments Sunday night, it did so with courage and conviction. Alicia finally did something was still finding the strength to do so long ago: She took a beating and mustered forward, prepared to move onto the next phase of her life. Whatever comes next, Alicia Florrick has had seven years to get ready.