The "militant complacency" of the Democratic establishment: Why Bernie & his supporters must continue to pressure Hillary Clinton

While the Clinton campaign boasts that America is "already great," unaddressed inequality continues to wreak havoc 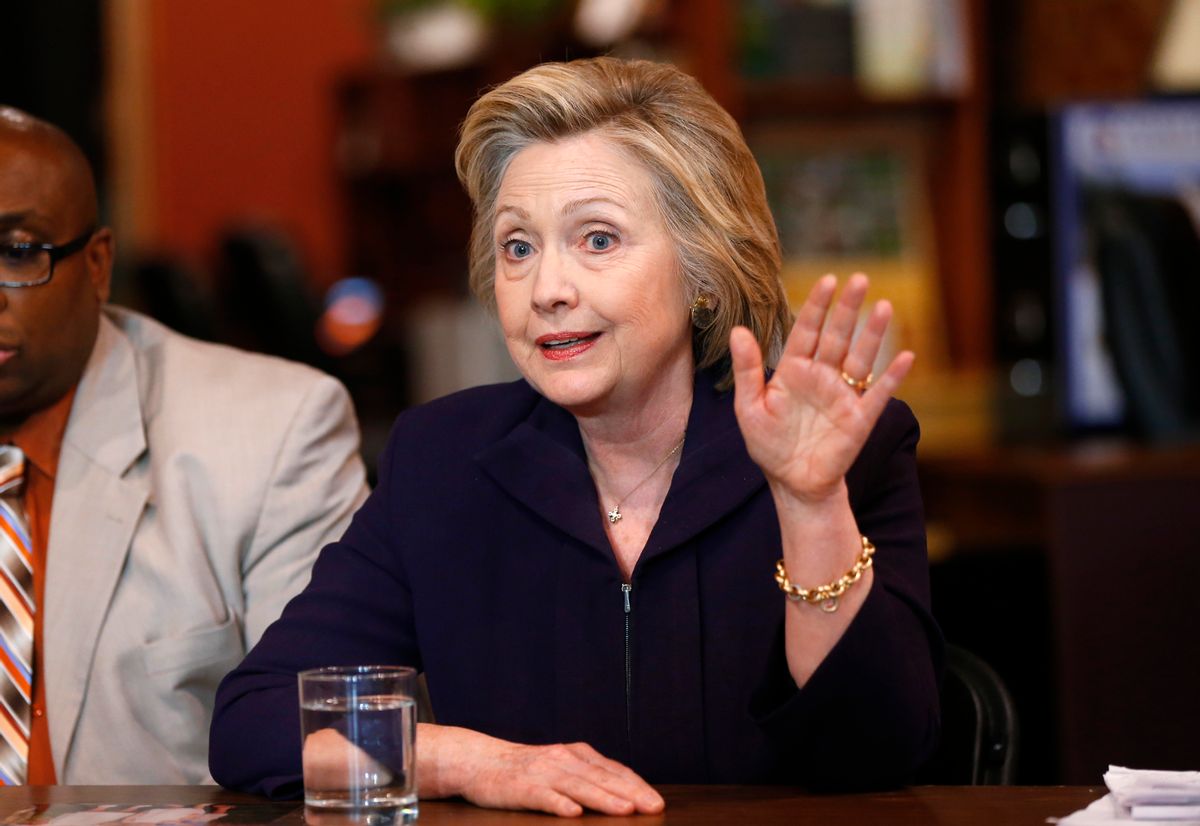 Now that Donald Trump has more or less locked up the Republican nomination, Hillary Clinton has begun to focus more attention on the New York billionaire, who doesn’t appear at all ready to tone down his inflammatory rhetoric, as his chief strategist had indicated he would a few weeks earlier. As many on the left have anticipated, Clinton now seems to be shifting back rightwards after many months of promoting herself as a bona fide progressive. (Excuse me, a “progressive who like’s to get things done.”)

“Hillary Clinton’s campaign is trying to seize on the turmoil Donald J. Trump’s ascent has caused within the Republican Party, hoping to gain the support of Republican voters and party leaders including former elected officials and retired generals disillusioned by their party’s standard-bearer...Mrs. Clinton’s campaign is repositioning itself, after a year of emphasizing liberal positions and focusing largely on minority voters, to also appeal to independent and Republican-leaning white voters turned off by Mr. Trump.”

Clinton is anything but unpredictable. Rather than trying to court those disillusioned Sanders supporters and left-wing malcontents, Hillary seems to believe that she has a better shot with the “fiscally conservative, socially liberal” country club Republicans (who like their foreign policy hawks).

Politico reported on Thursday that the Clinton camp has even started reaching out to top Bush family donors, “to convince them that she represents their values better than Donald Trump.” Considering that both former president’s George H.W. Bush and George W. Bush have already announced that they won’t be endorsing Trump or attending the Republican convention, it seems likely that Bush family donors are also wary of the billionaire. Jeb Bush’s failed campaign was funded by extremely wealthy individuals — by July of last year, his super-PAC had received 23 individual donations of $1 million or more.

And so it begins. The new Clinton slogan may as well be: “You may not like me, but I’m better than Trump.” It’s not inspiring, but given the sheer divisiveness of Trump, it could be sufficient. And if the past few elections are anything to go by, 2016 will be a record-breaking year for campaign spending, which means that Clinton doesn’t want to alienate her donors on K Street and Wall Street with too much economic populism. (Don’t be surprised if Trump begins to sound like more of an economic populist than Clinton — he has already flip-flopped on taxes, saying that he would be willing to raise them on the wealthy.) It looks like Clinton will be running on a platform of what can be called “militant complacency,” as Tom Frank amusingly puts it in a recent article.

The Democratic party has already released a brand new hat with a brand new slogan for 2016, and it perfectly captures this self-satisfied complacency: “America Is Already Great.”

Of course, this is mocking Trump’s own slogan, “Make America Great Again,” which could just as well be “Make America White Again”; but it does seem quite fitting for Clinton and other partisan Democrats, ironically enough.

These are the kind of Democrats who think soaring wealth and income inequality is not as big a problem as Bernie Sanders makes it out to be, as long as everyone has a chance to realize their “God-given potential,” or as long as the political and economic elite are sufficiently diverse. They're the kind of Democrats who worship the cult of meritocracy, and believe industry insiders have a kind of superhuman understanding of their industries, and are therefore best suited to regulate those industry. They're the kind of Democrats who only seem concerned with big money in American politics when it’s the Republicans taking checks from the Koch brothers or Sheldon Adelson. (This was exemplified by Clinton’s defense of her ties to Wall Street, arguing that no one could prove a quid pro quo — the very same reasoning conservative Supreme Court justices used when throwing out campaign finance laws.)

For these partisan Democrats, the Obama years have been an unequivocal success, and the many grievances that you commonly hear from progressives can be attributed solely to obstructionist Republicans, not the president's of trying or the fact that he was entirely uninterested in confronting powerful D.C. institutions and special interests — what Mike Lofgren has called the “Deep State” — from the very beginning.

“Wear it with pride,” reads the hat description, “when you're telling your friends about more than 73 straight months of private-sector job growth under President Obama [and] historically low uninsured rates.” There is no doubt that Obama’s economic legacy will be held in much higher regard than his predecessor’s (at least by economists), and the Affordable Care Act has indeed lowered uninsured rates, while limiting the abuses of insurance companies. But is this kind of complacency really warranted? Economic inequality is at historic levels and the majority of wage-earners have seen their compensation stagnate or decline since the recession; America has the largest prison population in the world (which is disproportionately African American and Hispanic) while most criminal Wall Street executives remain free; healthcare and drug costs have continued steadily rising — far outpacing inflation and wage growth — and Washington is almost completely controlled by monied interests. How great is America again?

Even while playing the role of progressive during the primaries, Clinton has been adamant that she doesn’t want to get into “contentious” fights with Republicans, even though Republicans have time and again proven that they have no interest in working with Democrats. (Of course, if she can manage to court GOP donors, maybe the Clinton administration will compromise on some more reactionary legislation with Republicans, as the previous Clinton administration so famously did.)

When you're complacent and self-satisfied, contentious fights may seem undesirable; but for people who have lost their homes, college graduates who are crippled in debt, Americans who can’t afford their medicine, or workers who are making subsistence wages, fighting Republicans — and, more importantly, special interests — is exactly what is this country needs. Which is why Senator Sanders should continue pressing on until the convention, and why the popular movement that has formed around him should remain mobilized long after 2016. Only a sustained grassroots movement on the left can combat the militant complacency of the liberal elite and usher in a new progressive era.