The rape of Lyanna Stark: "Game of Thrones"’ biggest mystery revolves around a woman's consent 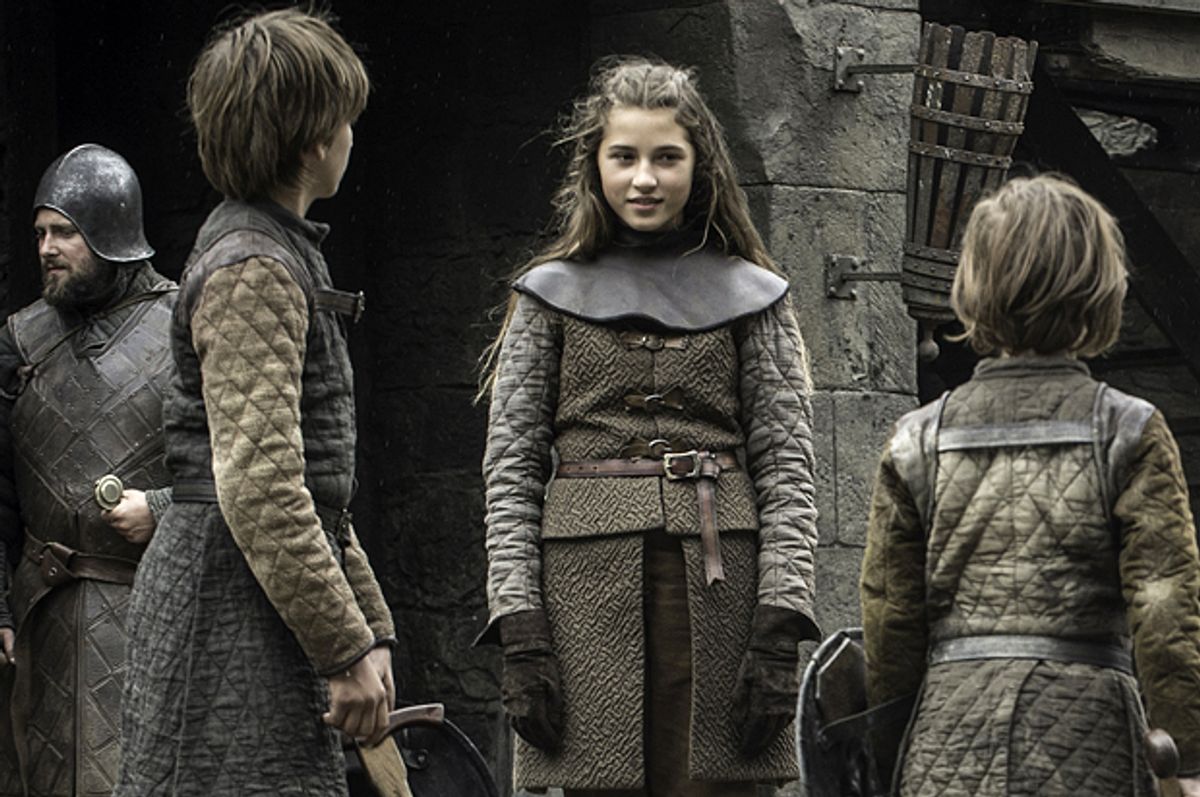 As I wrote in my recap this morning, last night’s episode of “Game Of Thrones,” “Oathbreaker,” was particularly exciting for Westerosi history buffs:

For a book-reading fan like myself, the most thrilling resolution was in Bran’s vision of a battle between a dozen or so knights in the dusty desert at the base of a nondescript tower. That tower is the Tower of Joy, and one of the knights fighting for entrance is Bran’s father Eddard Stark as a young man (played by Robert Aramayo in the flashback). This is an episode that has been described in the books in just the vaguest of terms, but it is a very important site: It’s where Ned witnessed his sister Lyanna’s final words before she died. As Littlefinger told Sansa last season, Lyanna’s abduction by the royal Prince at the time, Rhaegar, plunged Westeros into bloody war and usurped the Targaryen rulers for Robert Baratheon and his wife Cersei Lannister. Robert was originally engaged to Lyanna, and was never able to let go of the memory of her, which is one of the many reasons Cersei hated him (as detailed way back in season one).

The skirmish outside the Tower of Joy leads to Ned’s final conversation with his dying sister; in Bran’s greensight vision, Ned starts walking up the stairs to the top of the tower, where we can hear a woman screaming. To quote again from this morning’s recap, just to make sure we’re all on the same page: Lyanna Stark is almost definitely screaming in pain because she is dying while giving birth to a guy you might know named Jon Snow. Again, from my recap:

There is a prevailing fan theory, all but confirmed, that posits Jon Snow’s parents are not Ned and an unnamed random woman but instead Lyanna Stark and Rhaegar Targaryen. (Rhaegar, in addition to being the former Crown Prince, was Daenerys’ oldest brother.) The evidence in the book is a lot easier to locate—some very heavy foreshadowing, starting all the way back in the first book, when Ned was still alive to narrate from his point of view. In the show, the primary evidence is simply that Ned Stark doesn’t seem like the kind of guy who would cheat on his wife, and boy, for an average guy with a bastard son, Sean Bean’s Ned Stark sure seems to be tortured about something.

If this is the case, it was kept secret for some powerful reasons—ones that have something to do with that skirmish at the base of the Tower of Joy and something more to do with Jon Snow’s current ability to be resurrected from the dead.

The theory that Jon Snow is in fact Lyanna’s son with Rhaegar is one that has floated around ever since the very first book of “A Song Of Ice And Fire.” And when “Game Of Thrones” showrunners David Benioff and D.B. Weiss first met George R.R. Martin, they guessed, correctly, at Jon Snow’s true parentage. The skirmish outside the Tower Of Joy has some of Rhaegar’s best knights guarding a random little tower in the middle of nowhere. It is not too difficult to put together the pieces.

But what is still almost entirely unknown is how, exactly, Lyanna Stark ended up giving birth to Jon Snow at the top of that tower. We have a few scraps of stories. We know that Rhaegar abducted Lyanna, as described above. We also know of one other incident before the kidnapping, which took place at a jousting tournament at Harrenhall. In the grand tradition of Westerosi chivalry, when a knight won a tournament, he was given the right to crown any woman present the Queen of Love and Beauty. It was a grand gesture of attraction or love, a knight dedicating his victory to a peerless example of female beauty. But at Harrenhall, Prince Rhaegar—married to Elia of Dorne, Prince Doran and Oberyn Martell’s sister—gave the crown of roses he won not to his wife, but to Lyanna Stark, who was already engaged at the time to Robert Baratheon.

According to Robert and the Starks, this was just the first indignity Lyanna suffered; then Rhaegar kidnapped Lyanna and repeatedly raped her before leaving her for dead in a tower in Dorne. Lyanna Stark’s kidnapping is just another one of “Game Of Thrones”’ many canonical rapes, the world of violence that the women in it, especially, are subject to.

It’s ironic, given how controversial the depiction of rape is on “Game Of Thrones,” that one of the book’s most stubborn mysteries rests on question of how Lyanna Stark felt about what was happening to her. Because the exact same narrative that was used to overthrow the Targaryens could be interpreted in a different way—if Lyanna was in love with Rhaegar and didn’t want to marry Robert, then an abduction turns into an elopement. To complicate matters, over the course of the series we learn that women of the North, especially the Free Folk, expect to be kidnapped when a man wants to marry them. (If the wilding woman doesn’t like the man, she can always slit his throat—so Ygritte explains to Jon, in the books.)

Lyanna is described as a spirited girl much like her niece, Arya; and Arya, more than her sister Sansa, identifies with the Free Folk and their libertarian spirit. (The split between the Free Folk or the people of the North and the “Southron” Westerosi is usually represented by which gods they worship. Most of Westeros worships the Seven, but the weirwoods are kept for the old gods, and are sacred to the Stark family.) In all likelihood, she would have known of the wilding tradition of abduction, and maybe even thrilled to its romance, even if the guy making the offer was married with two kids already. She was, after all, just 16 years old.

To be sure, for some observers, 16 might seem too young for a woman to consent to sex with a man six to eight years older than her. In Westeros, it might not be. Sansa is just 12 years old, in the books, when she’s married to Tyrion; Daenerys is just 13 when married to Khal Drogo. Both men are much older than the pre-teen girls they are wedding in socially and religiously sanctioned ceremonies. Furthermore, characters like Robb Stark, Tommen, Joffrey, and Margaery Tyrell are all between the ages of 12 to 15 when they get hitched. (They’re aged up in the show, but that would suggest Lyanna would be aged up, too.) The evidence would suggest that Westeros seems to think 16 is old enough.

So if Lyanna Stark could have been fled her home and her engagement of her own choosing, to live with a man who she loved and who loved her, then the narrative of Robert’s Rebellion isn’t of a man raping a woman but a woman’s family preventing her from living her life. Perhaps the Starks and Baratheons, in going after Lyanna, were seeking the restoration of their property and reputation—i.e., Lyanna’s virginity—more than they were seeking her safety.

It is, of course, totally still possible that Rhaegar did kidnap and rape Lyanna. But the most intriguing part of this whole mess—the mess that basically spawned the entirety of the storytelling of “A Song Of Ice And Fire”—is that no one appears to have bothered to ask Lyanna how she felt about the whole thing. It’s ultimately her word that matters—not Rhaegar’s intentions, or the Starks’ desire to protect her, or Robert’s prior “claim” on her.

And throughout “A Song Of Ice And Fire” and “Game Of Thrones,” that is the one thing we still don’t know. We even know more about Rhaegar’s weird obsession with bringing back dragons and his harp than anything about Lyanna once she matured past being a little girl who loved to ride horses.

With this season of “Game Of Thrones,” Lyanna Stark, that screaming woman at the top of the tower, might get a chance to say a few words; to tell her side of the story. It will be intriguing to see how such a simple thing as a woman’s voice can have a profound affect on the history of an entire nation.