Understanding terrorism: Attacks have a political logic, although they are usually ineffective, scholar says

Terrorism is often more calculated than it's made out to be, expert Max Abrahms explains 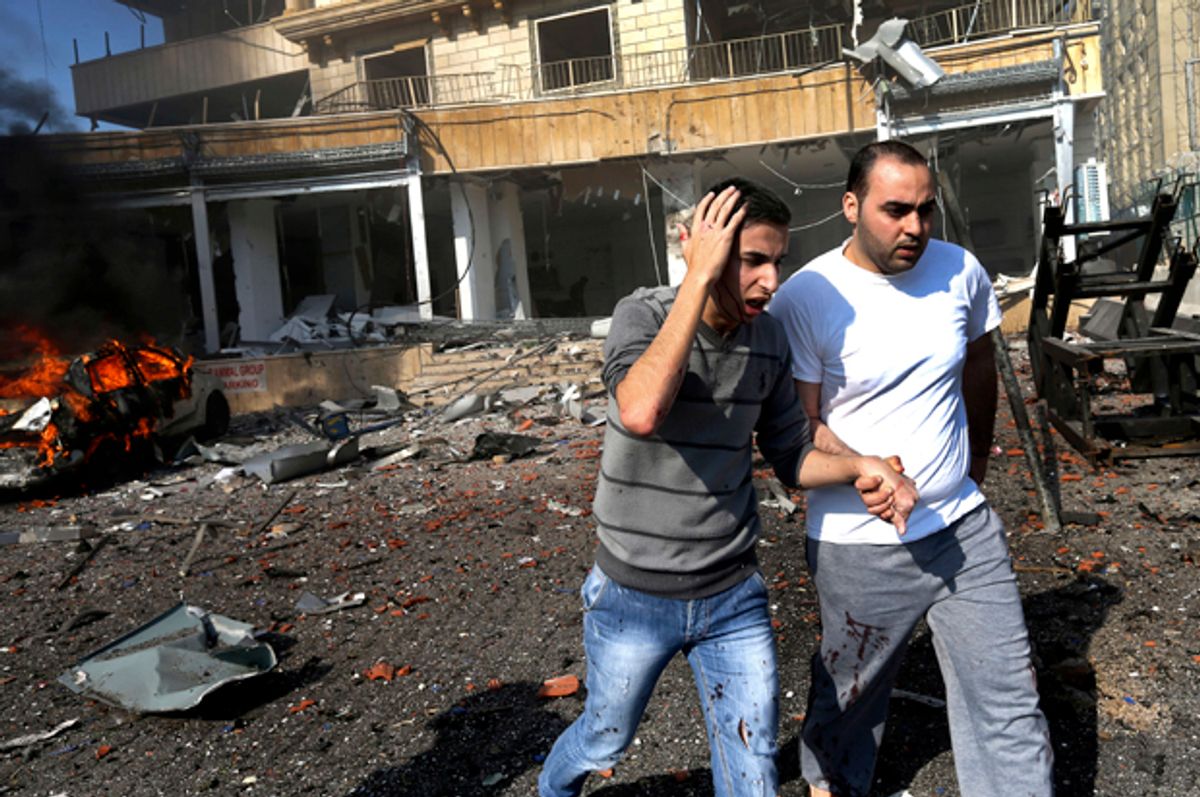 The site of explosions in the suburb of Beir Hassan, Beirut, Lebanon, Feb. 19, 2014, where two suicide attackers from an al-Qaida-linked group blew themselves up. (AP/Hussein Malla)
--

Terrorism is clearly reprehensible. Yet media reports and politicians often present terrorist attacks as if they are less calculated than they really are.

Scientific research shows that this view is mistaken. Terrorism scholars have found that, leaving aside the question of immorality, there is an internal political logic to terrorist attacks — although they are frequently ineffective.

This has long been an unsolved "puzzle in terrorism studies," explained Max Abrahms, an assistant professor of political science at Northeastern University, in an interview with Salon.

Scholars, Abrahms said, have traditionally conceived of terrorism as "a political communication strategy, that groups use violence to amplify their grievances, and the costs to the target countries of ignoring them."

This interpretation flies in the face of a crucial fact: only roughly one in seven terrorist attacks is ever claimed. No group takes responsibility for approximately 86 percent of terrorism attacks.

Abrahms says his research hints why this is the case: Terrorist groups "are essentially rational political actors, especially at the top," and usually only claim responsibility when they can politically gain from it.

For a long time, "terrorism researchers worked under the assumption that terrorist groups are unitary actors," Abrahms said.

This idea, that terrorist groups are essentially homogeneous with all members motivated by the same goals, is flawed. Abrahms criticized this "very simplistic" approach, stressing "it's more complicated than that."

"Terrorist groups are actually diverse social units and are internally heterogeneous," the scholar explained. There are many differences between those at the top of the organization and those at the bottom.

Rationality does not assume that people are engaging in moral activities, he emphasized, "all it assumes is that people learn based upon the predictable consequences of their behavior."

Abrahms published some of this research in "The Strategic Logic of Credit Claiming: A New Theory for Anonymous Terrorist Attacks," an article in the academic journal Security Studies.

The report was co-written with Justin Conrad, an associate professor of political science at the University of North Carolina at Charlotte.

Abrahms' and Conrad's study turns a lot of terrorism research on its head. "'Anonymous' attacks are actually the norm," they note, and much of the scholarly "literature simply dismisses the fact that the lion’s share of terrorist incidents worldwide goes unclaimed."

They cite fellow scholar Bruce Hoffman, who has argued that a serious study of the majority of terrorist attacks would "require re-thinking our most basic and longstanding assumptions about terrorism."

Some scholars grapple with this by disposing of the notion that terrorist attacks are sometimes politically logical. Abrahms and Conrad insist otherwise, arguing instead that, "far from breaching the dominant scholarly view of terrorist groups as rational political actors, their patterns of credit claiming bolster it."

"In practice, credit claims are typically issued by the leadership or at least with its consent," they write. "When operatives strike a target, their leaders claim credit only if the expected political return is positive. When the anticipated political fallout is negative, leaders of the group are understandably reluctant to attribute the violence to their organization."

Their research shows that "terrorist group leaders are significantly less likely to take responsibility for an attack when their operatives have struck civilians."

"Attacks on military targets are not only more likely to be claimed by the leadership, but to evoke competing claims of responsibility from multiple groups," the scholars add.

Abrahms has studied terrorism for more than a decade, and, through collecting data, he has found again and again that not all attacks are equally beneficial for militant groups.

Governments are less likely to grant political concessions to groups when they indiscriminately target civilians in terrorist attacks than they are to groups that selectively attack military targets.

"In this sense, civilian targeting is counterproductive," Abrahms said.

Over time then, the scholar noted, terrorist groups often move away from civilian attacks and toward military ones, "because leadership understands that their operatives are actually jeopardizing their political goal by striking politically sub-optimal targets."

"ISIS is very anomalous in all sorts of ways," Abrahms said, but al-Qaeda — the terrorist group off of which ISIS broke in early 2014 for not being extreme enough — is actually a more typical reflection of terrorist groups overall.

Abrahms details how his research provides insight into ISIS and al-Qaeda in another Salon article.

In some ways, Abrahms' and Conrad's research is consonant with that of Robert Pape, a prominent terrorism studies scholar who revolutionized the field.

In his book "Dying to Win: The Strategic Logic of Suicide Terrorism," Pape, a professor of political science at the University of Chicago, famously showed that terrorism is fundamentally political in nature, not religious.

"Rather, what nearly all suicide terrorist attacks have in common is a specific secular and strategic goal: to compel modern democracies to withdraw military forces from territory that the terrorists consider to be their homeland," Pape explained in the book.

The group that carried out the most suicide attacks, he found, was not even religious; it was a secular nationalist group, the Tamil Tigers.

Abrahms says he agrees with Pape on some of his findings, but disagrees with him on numerous issues, and has criticized him for years.

"I respect his work greatly," Abrahms added. "My empirical research is very much a response to" Pape's, he added. Yet Abrahms says his work uses much more data, whereas Pape's is less quantitative.

"I have measured very systematically whether terrorism facilitates government concession," and the data demonstrates that terrorist attacks are frequently ineffective, Abrahms maintained.

Both scholars agree that terrorism is a fundamentally political action with a kind of internal logic, yet Abrahms says the data shows that, overall, terrorism does not pay as an instrument of coercion, while Pape argues the opposite.

"Pape can't explain which terrorist leaders don't take credit for all their attacks, whereas my research can explain the variation in credit claiming," Abrahms said.