Beyoncé wins again: She faces protests for her politics, but like the Dixie Chicks and Sinead O'Connor, the right's proven wrong again 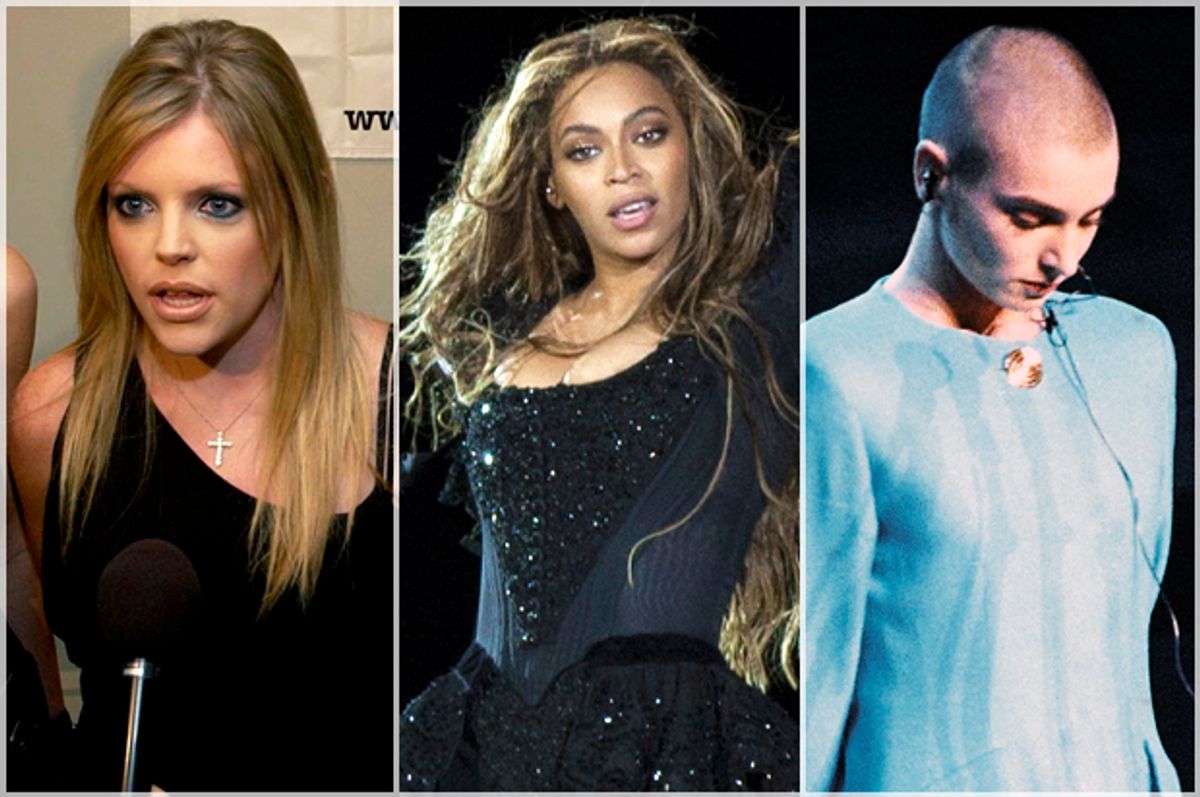 Ever since Beyoncé released her single "Formation" and promoted it during her Super Bowl half-time performance back in February, there's been ham-fisted and frankly pathetic efforts from police organizations across the country to claim that Beyoncé's anti-brutality/anti-racism message is somehow an anti-police message. The latest effort in this pointless tantrum came to us on Saturday night, as members of an organization called Coalition for Police and Sheriffs (C.O.P.S.) protested a Beyoncé concert in Houston, which is her hometown.

"Some of her performances we believe to be anti-police," police officer Tony Ragsdale told KHOU in Houston.

"The police union is offended at her antics," Burt Springer, a former officer and COPS member , told the Houston Chronicle.

This kind of language — calling Beyoncé's art "antics," as if she's a misbehaving child — is one of the major reasons to be suspicious that these police protests are less about a sincere concern that Beyoncé is encouraging crime, and more a sexist and racist gesture of contempt for a woman who dares criticize white male authority.

It doesn't help that the police department associated with the protest, the Pasadena Police Department, is from one of the most lily-white suburbs of Houston, where less than 2% of residents are African-American. The police union for Houston itself did not participate in the protest. On the contrary, the union president Ray Hunt told the Chronicle that "the spaces quickly filled up" for off-duty police officers working security at the concert.

"If this was a protest of someone who was advocating killing cops and claiming that we just routinely violate people's rights, I'm sure you'd have a lot of people refusing and we'd probably be saying that we wouldn't want our officers working there, but we haven't seen that with her," he added.

A similar situation went down in Miami earlier this year. Javier Ortiz, the president of the Miami Fraternal Order of Police, wrote a letter criticizing Beyoncé for supposedly stoking anti-police sentiment. The Miami Community Police Benevolent Association, which is a group for black police officers, immediately responded with a letter denouncing Ortiz for portraying African-Americans "in a negative light with thinly veiled racist overtones".

Beyoncé herself has been crystal clear about what she is doing with imagery regarding police violence in her videos, telling Elle that "anyone who perceives my message as anti-police is completely mistake."

"But let's be clear," she added. "I am against police brutality and injustice. Those are two separate things."

These protests fit into a long history of periodic freakouts at female pop stars who challenge authority, especially white male authority. It would be wise for any reactionary who wants to participate in such a freak-out to consider this past, because history usually ends up siding with the women who are speaking out and not with their whiny detractors.

Let's go back to the year 1992, when Sinead O'Connor ripped up a photo of the pope live on air on "Saturday Night Live". O'Connor was angry because she believed that child sex abuse was rampant within the church and that priests who molested children were getting away with it.

But the gesture was immediately received by the public as a woman rejecting male authority, full stop. O'Connor was already on thin ice in a lot of people's eyes, because her shaved head suggested an indifference to beauty norms that women were (and still often are) expected to accept without question. Asserting her right to tell the Pope were to shove it was too much for huge swaths of the public.

John Cardinal O'Connor insinuated that she was practicing witchcraft, trying to use "sympathetic magic" to destroy the pope. "Saturday Night Live" apologized for the incident. NBC was swarmed with angry phone calls. A rally was held in New York City, where her CDs were crushed with a steamroller.

Nowadays, everyone involved in the anti-Sinead protests comes across as a screaming idiot, of course. The child abuse she was protesting turned out to be very, very real and not, as people seemed to think, the hallucinations of some attention-seeking hysterical woman. Which, in turn, makes all the people who attacked her seem like the kind of people who are too busy worrying about a woman being outspoken to care about things like child sex abuse.

Same story with the Dixie Chicks, a decade later. The lead singer, Natalie Maines, spoke out against the Iraq War. The idea of a woman daring criticize a beloved white male conservative leader like George W. Bush was more than conservatives could bear, so we got the same reaction O'Connor got: Denunciations, destroyed CDs, the whole thing. And, just as with O'Connor, Maines turned out to be the hero of this story. The Iraq War was a huge disaster. Even conservatives are wary of defending it publicly now. Maines, like O'Connor, was punished for being right.

The ugly behavior at Woodstock '99 is a slightly different example, but fits right into the pattern. The 90s was an era not just of women's growing prominence in pop music, but their growing politicization. It wasn't just underground acts, such as those on the riot grrrl scene, either. Mainstream rock acts like L7 and Hole, as well as hip-hop artists like TLC and Salt 'N' Pepa, released a string of hit songs that protested sexism, objectification, and the sexual policing of women. The decade was capped off by the start of the Lilith Fair, which, despite its dopey folk rock-centrism, was still a powerful statement in favor of female artists being political and outspoken.

The reactionary male reaction to this reached its apex at Woodstock '99, with men in the audience, egged on by Dave Matthews and even the concert organizers, hollered sexist abuse at women and even, in many cases, sexually assaulted them. While the concert was plagued with violence that wasn't related to gender, it was this misogyny that was the most memorable aspect of it, a collective temper tantrum by a bunch of young men who couldn't tolerate the idea of sharing the world fairly with women.

Needless to say, history has very clearly sided against the reactionary frat daddies of Woodstock '99. Feminism wasn't smacked down for long and instead came roaring back with a vengeance, with female artists even more outspoken and pro-feminist than they were in the 90s.

You'd think the lesson would sink in by now, but nope, once again you have the same situation: Female pop star makes a political statement that challenges white male authority, reactionary forces overreact, and history will show she is right and they are wrong. It's so obvious what the end game is here, and yet you still have people lining up to play the villains in a morality play about what happens to women who speak truth to power.

But perhaps there are reasons to hope that some people are finally beginning to learn their lesson. After all, the protests against Sinead O'Connor and the Dixie Chicks were huge and dramatic, and extremely effective at signaling to other women that they should be silent or suffer the wrath of the angry mob. In both cases, the women who were targeted never really recovered, retreating from the spotlight somewhat and downscaling their artistic ambitions.

Beyoncé, on the other hand, seems unstoppable. Despite the outcry over her Super Bowl performance and anti-brutality imagery in her "Formation" video, she went ahead and released the "Lemonade" visual album, complete with more imagery protesting police violence. The protests against her have been relatively weak — some reports say only 25 people showed up in Houston — and undermined by having other police groups issuing statements against them.

Is it a sign that the stigma against outspoken women is finally beginning to recede? She is, after all, making these statements in an era where Lady Gaga performed an anti-rape song at the Oscars, Taylor Swift makes feminist commentary a regular part of her interview circuit, and even more apolitical stars like Rihanna and Miley Cyrus have incorporated a DNGAF attitudes into their public images. It wasn't intended, but a little sisterhood of the loud-mouthed ladies has formed in pop music, making it all that much harder to pick one off with feigned outrage and bad faith protests of the sort that did so much damage to female pop stars in the past.