The November freakout begins: It's May, so let's all go crazy over a few good polls for Trump

Quinnipiac swing-state polls show Trump running even with Clinton, to the delight of a drama-hungry media 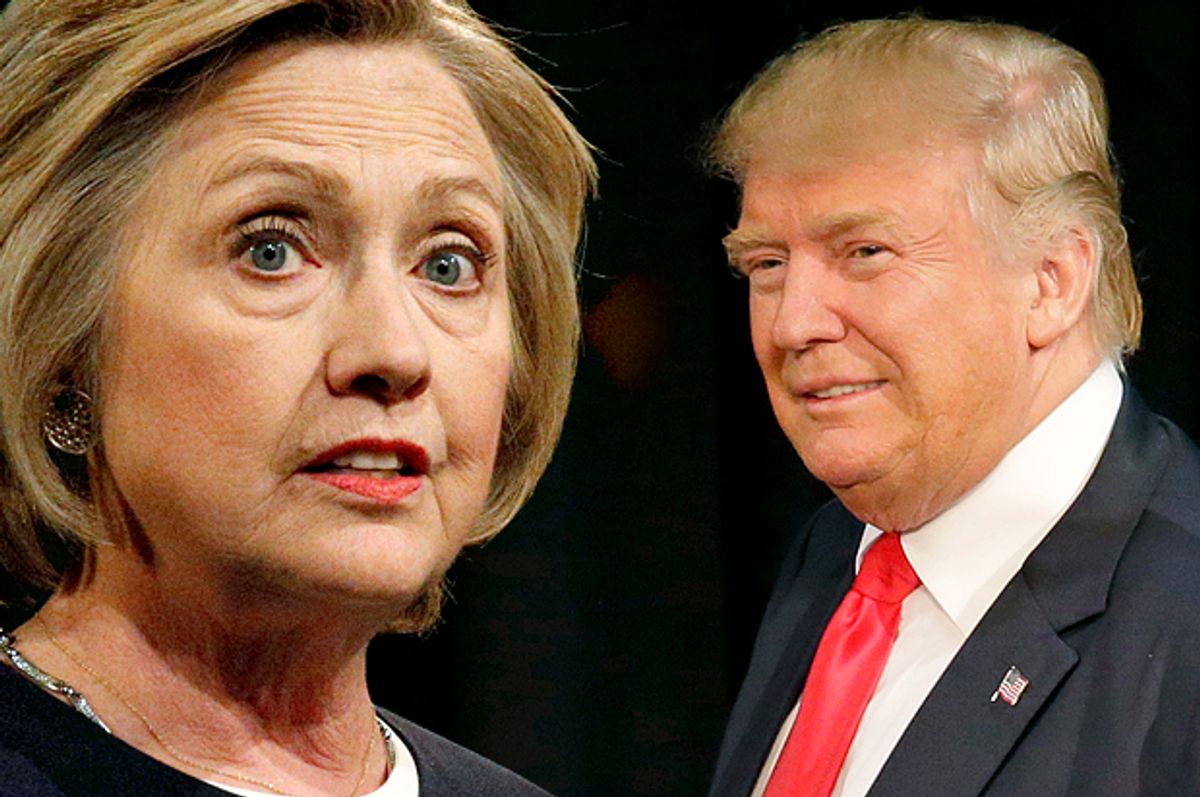 It’s been a solid week since Donald Trump became the presumptive Republican presidential nominee, and we were overdue for a generalized freak-out over whether an unlikeable and manifestly unqualified cartoon character could actually win the presidency. But that void has now been filled, thanks to a trio of swing-state polls just released by Quinnipiac.

According to the pollster, Trump is either slightly head or tied with Hillary Clinton, the prohibitive favorite for the Democratic nomination, in three important states: Florida, Pennsylvania, and Ohio. There are caveats aplenty, as one might expect, but Quinnipiac’s findings are being greeted by a political media that is itching for a tight and dramatic general election contest.

Per Quinnipiac’s findings, Trump is up four over Clinton in Ohio, while Clinton leads Trump by just one point in Florida and Pennsylvania. That all sounds very dramatic until you remember that it is, in fact, May, and we’re still six months from Election Day. Around this time in the 2012 race, Quinnipiac had Mitt Romney up six over Barack Obama in Florida (Obama won the state by one point), and they had the two candidates running about even in Ohio (Obama won the state by three). But these are the first swing-state polls to come out since Trump snagged the nomination, so they’re being hyped as indicators that the race is “airtight,” and “may be closer than some of the early prognostications suggest.”

As for the polls themselves, they make some demographics assumptions that point towards a more Trump-friendly electorate than one might otherwise presume. Quinnipiac’s Florida sample indicates an electorate that is 69 percent white, compared to 67 percent in 2012. In Ohio, Quinnipiac puts the share of the white vote at 83 percent, while white voters made up 79 percent of the Ohio electorate in 2012. The story repeats itself in Pennsylvania – 81 percent white for Quinnipiac, compared to 78 percent four years ago. White voters are critical for Republicans generally and for Donald Trump especially, given his almost impossibly high negatives among non-white voters, but they’ve been steadily declining as a percentage of the electorate since the Reagan years. Perhaps it’s possible that Trump will reverse that long-observed demographic trend, though it seems unlikely given that Trump appears to be an effective driver of turnout among the minority groups that despise him. But even if Trump does preside over a white-vote rebound, he’s still only achieving rough parity with Clinton in states that are critical to whatever shot he has at winning the White House.

What is definitely noteworthy about these polls is that they show Republican voters consolidating around Trump as the nominee. When Ohio Republicans voted on March 15, 31 percent of them told exit pollsters that they would not vote for Trump in the general. One-quarter of Florida Republicans said the same. But in all three Quinnipiac polls, Trump takes upwards of 80 percent of the GOP vote. This consolidation was bound to happen as the passions of the primary faded and partisan reflexes took over – now that it’s down to Trump or Hillary, a lot of #NeverTrump Republicans are discovering that maybe Trump isn’t all that bad, at least compared to the prospect of another President Clinton.

Anyway, this is all stuff to keep in mind when you hear pundits cite these polls to talk about Trump’s “unexpected” strength or how the general election could be a “nail-biter” or a “barn burner” or whatever other formulaic descriptor is deployed. It’s still super early in the cycle, the Democratic race isn’t even completely resolved yet, and we still haven’t even got a glimpse of general election-mode Donald Trump. Ignore the drama, look at the numbers in their proper context, and calm the hell down.