The women who accused Bill Clinton: A primer on the sex scandals that Donald Trump won't stop taunting Hillary about

Trump said of Hillary: "She's been the total enabler. She would go after these women and destroy their lives" 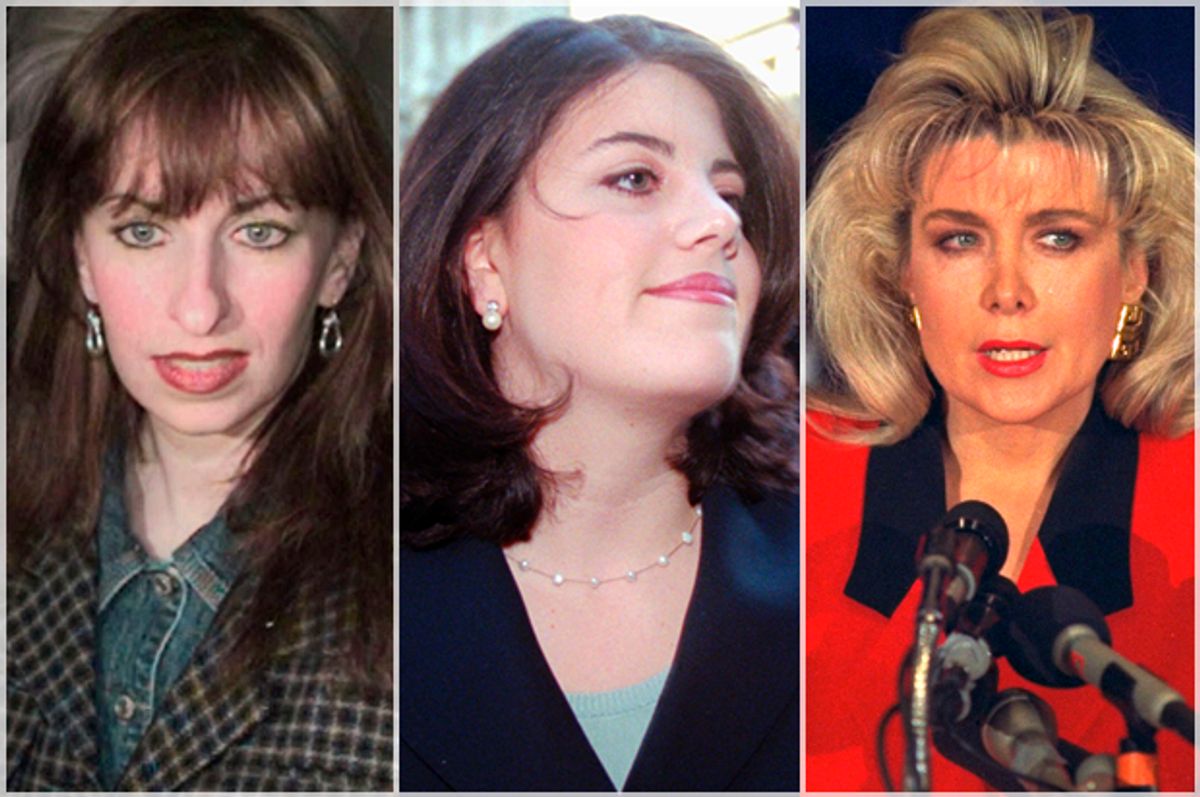 After a primary campaign that saw him insult Carly Fiorina's looks, threaten to expose (something) about Ted Cruz's wife, and boast about the size of his penis, Donald Trump promised voters that once he won the Republican nomination, he would tone things down. Weeks before his last remaining rivals dropped out of the race, Trump declared that when the time is right, "I will be so presidential you will be so bored."

But now that the nomination is all but locked up, it's become apparent that promises of a more stately, diplomatic Trump were grossly overstated.

Trump didn't even make it a week as the presumptive Republican nominee before launching a series of decidedly unpresidential attacks on his likely general election opponent. At an Oregon rally on Friday, Trump accused Hillary Clinton of enabling her husband's alleged sexual misconduct and then mistreating the women involved.

"She's been the total enabler. She would go after these women and destroy their lives," Trump said. "She was an unbelievably nasty, mean enabler, and what she did to a lot of those women is disgraceful." In a subsequent appearance on CNN, Trump called Bill Clinton "the biggest abuser of women, as a politician in the history of our country."

Trump seems intent on making Bill Clinton's sexual history — and Hillary Clinton's responses to it — a campaign issue. Here's a quick refresher on a few of the Clinton sex scandals that seem likely to be dredged up in the months to come:

In May 1994, former Arkansas state employee Paula Jones filed a civil suit accusing Bill Clinton of "sexually harassing and assaulting" her three years earlier. According to the lawsuit, after inviting Jones into his hotel room, Clinton exposed himself and propositioned her with "unwanted sexual advances." The search for evidence in the case led Jones's legal team to discover the Monica Lewinsky affair that eventually resulted in Clinton's impeachment.

Clinton denied the allegations, but eventually paid Jones $850,000 to drop the lawsuit. He never publicly apologized or admitted wrongdoing.

In the leadup to the 1992 New Hampshire primary, the supermarket tabloid The Star published a story about an Arkansas state employee and nightclub singer named Gennifer Flowers who said that she and Bill Clinton had a 12-year-long affair. During the ensuing media scrum, the Clintons publicly addressed Flowers' claims in a highly publicized "60 Minutes" interview immediately following the Super Bowl. Bill Clinton vaguely acknowledged "wrongdoing," but called Flowers' allegation of a 12-year affair "false." According to Carl Bernstein, Hillary Clinton took "aggressive, explicit direction of the campaign to discredit" Flowers.

In the midst of the Flowers scandal, Bill Clinton left the campaign trail to return home to Arkansas to preside over the execution of Ricky Ray Rector, a mentally disabled prisoner. The late Christopher Hitchens sharply criticized Clinton for cynically using the execution as a distraction from negative publicity arising from the Flowers story.

Six years later, Clinton confirmed for the first time in a deposition relating to the Paula Jones lawsuit that he did have sexual relations with Flowers.

Juanita Broaddrick, a former nursing home administrator, said in a 1999 interview that Bill Clinton raped her in 1978. Clinton, then the Arkansas attorney general, was in the midst of his first gubernatorial campaign, for which Broaddrick had volunteered. Broaddrick recounted the incident, which she said occurred in a Little Rock hotel room, in an appearance on NBC's Dateline:

In 2016, Broaddrick said that Hillary Clinton approached her at a fundraiser three weeks after the incident in what Broaddrick believed was an attempt to silence her. Broaddrick told The Hill she is supporting Donald Trump for president.

In a March 1998 "60 Minutes" interview, former White House volunteer Kathleen Willey said Clinton made unwanted sexual advances on her in 1993. Willey told CBS's Ed Bradley that during a private moment in the White House, Clinton kissed her, groped her breast, and placed her hand on his genitals. Clinton denied Willey's allegations in a deposition relating to the Paula Jones case.

Willey accused Hillary Clinton of enabling her husband's behavior in 2015 and will reportedly campaign against the former First Lady's presidential bid on behalf of a group created by Trump ally Roger Stone.

As a 19-year old student at Oxford in 1969, Wellstone filed a complaint of sexual assault against Bill Clinton.

Zercher, a flight attendant on Bill Clinton's campaign plane during his first presidential run, told the Star that Clinton groped her on the jet while his wife slept a few feet away.

Rock and roll groupie Connie Hamzy became one of Bill Clinton's first accusers when she claimed in 1991 that she was propositioned by the then-Arkansas governor seven years earlier. "We have to destroy her story," Hillary Clinton said in response to Hamzy's claims, according to Clinton campaign aide George Stephanopoulos.

Lewinsky first became sexually involved with Bill Clinton while she was a 21-year-old White House intern in 1995. After moving to a position at the Pentagon in 1996, Lewinsky shared details of her relationship with the president with a co-worker named Linda Tripp, who secretly recorded the conversations and gave the tapes to Independent Counsel Kenneth Starr.

Clinton had denied that he had had sexual relations with Lewinsky in a deposition in the Jones case, and was eventually impeached over his efforts to conceal the affair. He was later acquitted by the Senate.

During the scandal, Hillary Clinton reportedly referred to Lewinsky as a "narcissistic loony toon."