Celebrity baby worship is insane: Good for Eva Mendes and Ryan Gosling for saying "no, thanks"

The industry treats kids like corporate mergers and fashion icons before they can even walk—why are we so obsessed? 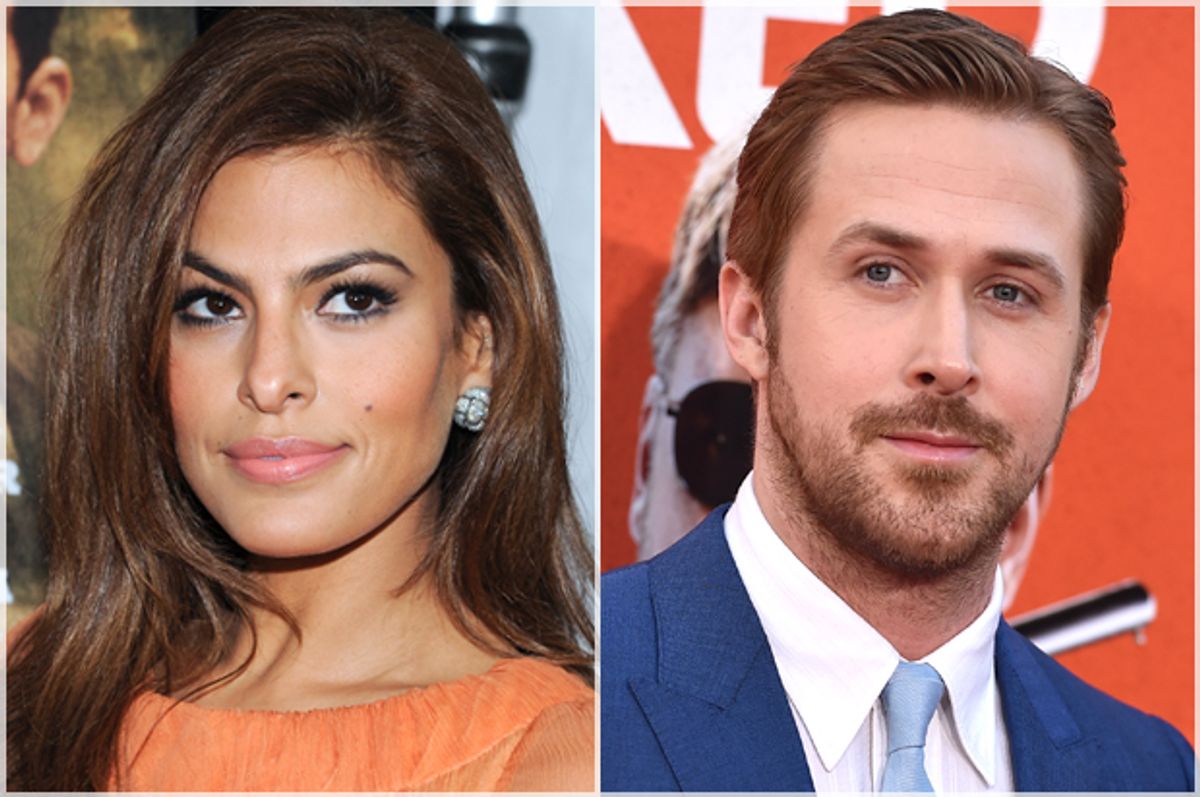 Eva Mendes and Ryan Gosling have pulled the biggest coup in Hollywood: According to reports, the couple gave birth to their second child in April—with no one the wiser. Tabloid media titan TMZ reports that Mendes gave birth to Amada Lee Gosling at Providence St. John’s Health Center in Santa Monica on April 29. TMZ, who managed to obtain a copy of the child’s birth certificate, claims that the pair named the newest addition to their family after Mendes’ grandmother.

In age of Internet-fueled obsession with every aspect of a woman’s pregnancy—from the initial baby bump to the all important post-baby weight loss—it’s amazing that the couple managed to keep the news a secret for so long. People magazine only reported that Mendes was expecting at all less than a month ago, when the outlet reported that the 42-year-old actress “hasn't ever wanted anyone beyond her close friends and family knowing more than they had to.” Call it a win for privacy in the digital age, but even more than that, it’s heartening to see parents opt out of the toxic culture of celebrity baby worship that demands constant updates about famous offspring. Every single one of us should follow their lead.

This is an industry that treats children like corporate mergers, fashion icons, and objects of an almost religious devotion before they can even walk or talk, let alone sign an endorsement deal. When Jennifer Lopez and Marc Anthony gave birth to twins in 2008, they pulled in what was then a record sum for the first photos of a celebrity couple’s children: $6 million. That total would be eclipsed within months. Knox and Vivienne, the fraternal twins of Angelina Jolie and Brad Pitt, would quickly become household names from the moment they were born. Their debut into the limelight—courtesy of People magazine—netted $15 million. That’s more than most movies make in their opening weekend.

But no financial impact was more massive than the Royal Baby, an infant whose coming was such a media sensation that Prince George’s July 2013 birth was estimated to generate $400 million in revenue for the U.K. economy. For celebrity news websites, the young royal’s birth signaled a boom time after a long drought: According to the New York Times, US Weekly had the biggest traffic day in its website’s history on July 23, the day that new mother Kate Middleton finally vacated the hospital with her “bundle of baby joy.” The same was true for People’s site, which reported a nearly 50 percent boost in traffic on the very same day. The magazine’s print publication on the royal birth was its biggest-selling of the year.

At the time, the editor of the gossip website Hollywood Life, Bonnie Fuller, predicted that Prince George would remain a cash cow for tabloid publishers. “The royal baby will become a regular beat, just like Shiloh and Suri were the babies of six years ago,” Fuller told the New York Times, also referring to Suri Holmes-Cruise, the now 10-year-old daughter of Tom Cruise and Katie Holmes. “The two babies that Hollywood Life audiences are going to be obsessed with are going to be Prince George and Kim Kardashian’s baby, North West.” US Weekly editor Mike Steele called it the “royal baby boom.”

It’s astute that Fuller notes the presence of Holmes-Cruise in this discussion, whose April 2006 birth would signal the oncoming shift in how we treat the children of celebrities. The famous blog “Suri’s Burn Book” satirized the obsession with the newborn, treated as an influential media presence simply for the fact of her existence. The blog’s creator, Allie Hagan, reimagined Holmes-Cruise as a diabolical queen bee and the world as her minions. In an interview with the Irish Examiner, Hagan described this relationship as a “very new phenomenon.” “The example I like to give is that Michael J Fox was one of the biggest celebrities in America in the ’90s,” she said. “He has four kids and I don’t even know their names. People just didn’t care that much.”

Although many cite Demi Moore’s Vanity Fair photoshoot, in which the pregnant actress posed nude on the magazine’s cover as the celebrity baby tipping point, it likely wasn’t until 2008—when a number of famous couples all gave birth at the exact same time. In addition to the aforementioned couples, there was Gwen Stefani and Gavin Rossdale, Christina Aguilera and Max Liron, Nicole Richie and Benji Madden, Jessica Alba and Cash Warren, Nicole Kidman and Keith Urban, Ashlee Simpson and Pete Wentz, and Halle Berry and Gabriel Aubry. The difference between then and 1991 was the presence not only of sites like TMZ but also social media, which made every aspect of these couples’ lives public fodder.

Many celebrity parents — like Dax Shepard and Kristen Bell, who have demanded that paparazzi refrain from photographing their kids — have pushed back against this culture in notable and important ways. After Suri Holmes-Cruise was born, Tom Cruise and Katie Holmes notably kept their newborn daughter out of the media spotlight for the first few months of her life. As Entertainment Weekly’s Dalton Ross notes, that blackout led to intense speculation that there had to be something wrong with her. “I’d constantly hear about what freaks they were for keeping their baby in hiding and how Suri must have four eyes and no nose,” he wrote. But the decision was natural: Who wouldn’t want to keep their child from the absurd scrutiny of a harsh public?

Her eventual debut and the massive attention that followed indicated how inevitable the baby craze would become. The Examiner called her influence the “Suri Cruise effect,” when children became expected to be brands. “Four out of 10 children are dressed in designer clothes by the age of two, and there are even blogs especially dedicated to analysing the wardrobes of Suri Cruise and Harper Beckham,” the outlet’s Louise O’Neill writes. “Of course, much of what they wear is beyond the reach of the average family, with Suri photographed carrying her own £11,000 Hermes bag, or wearing a £1,300 Dolce & Gabbana trench coat with a pair of £500 miniature Marc Jacobs heels.”

The focus placed on these young children can also be a dangerous double-edged sword. The public, watching their lives unfold behind the safe distance of a computer screen, has a way of treating these offspring like fully-formed adults and celebrities in their own right—not people who are only famous by virtue of what their parents do for a living. After North West was born, The Daily Beast reported that she “was the subject of nearly half a million tweets” in the week after the news broke. When the young girl made her debut at Paris Fashion Week in 2014, West was treated like a starlet walking the red carpet, ready to be picked apart. The child wore a black sheer dress to the event—of which Twitter vehemently disapproved. It was deemed “too mature.”

That criticism, of course, was more lobbied at West’s mother than the child herself, but if society has a way of treating pregnant women like public property—especially famous ones—the same appears to be true of their children. When Kim Kardashian was pregnant, she was subjected to harsh Internet trolling about her weight gain, even though her body did precisely what it was intended to do when there is a life growing inside it: grow along with it. That ownership, however, does not end with the child’s birth; they will be treated as a public good throughout the course of their entire existence. Should they become a cautionary tale, the child will become a listicle. If they manage to be well adjusted, they will be applauded for doing so despite the odds.

That’s a gamble that many parents may be unwilling to take, and a growing number of celebrities are asserting their right to reveal information about their children’s lives on their own terms. After actor Edward Norton and his wife, producer Shauna Robertson, had their first child, they didn’t reveal his name to the press for two years. (Did you even know Norton was married?) It might not help People’s bottom line—which has been devoting increasing amounts of its coverage to celebrity baby news in recent years—but it’s best for everyone when we back off and allow kids to be kids. Growing up is hard enough as it is. Would you really want to do it with 300 million people watching?