The big anti-choice lie: Crisis pregnancy centers — tools of the Christian right — are only good for making women scared and miserable

CPCs claim to be about stopping abortion, but their own numbers show they are really about shaming women 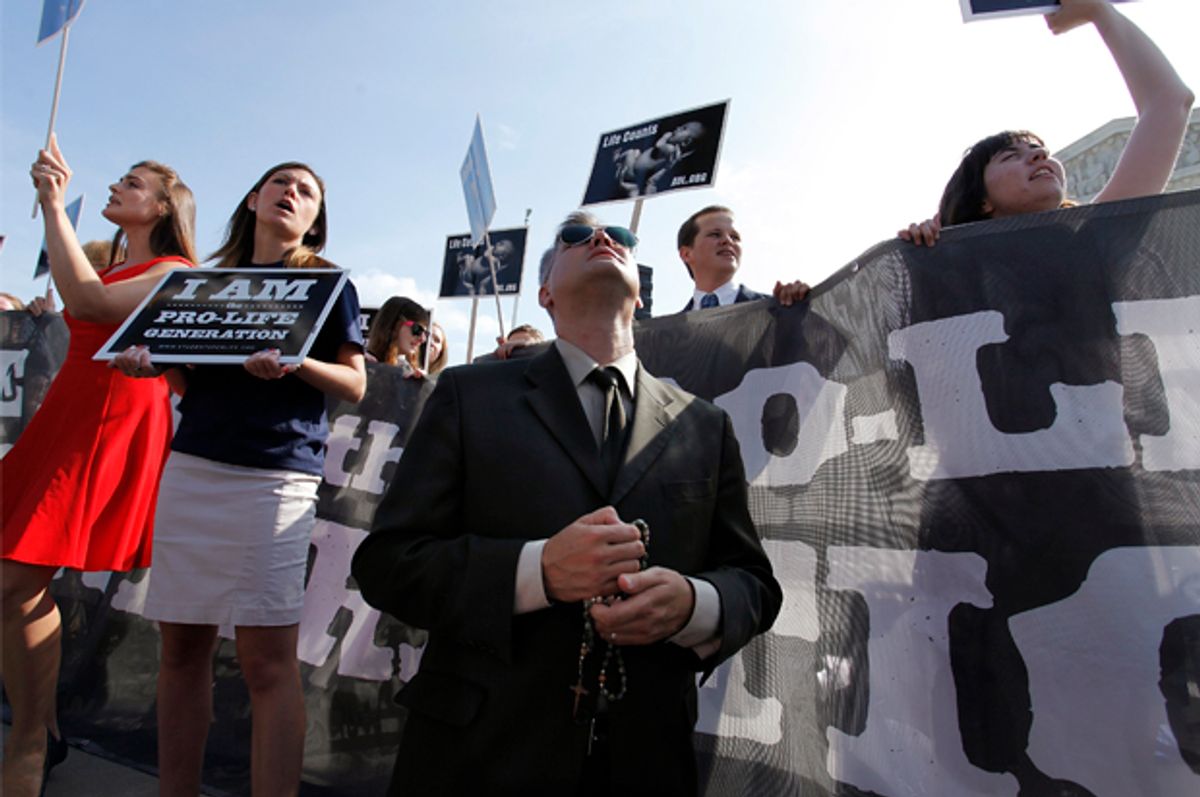 Monday, "Full Frontal with Samantha Bee," with the help of Patton Oswalt, aired a darkly hilarious expose of crisis pregnancy centers (CPCs). Her piece showed how these Christian right organizations lure women seeking abortion by pretending to be women's clinics and offering free pregnancy tests, only to hit them with a bunch of anti-choice propaganda full of lies about how they are supposedly going to suffer and die if they get abortions.

During the piece, they interviewed a victim of this scam, a woman named Cherisse Scott, who went to a CPC, thinking they would help her, and was so badly scared by their lies — the falsely told her abortion causes infertility — that she had the baby instead.

"I love my son, absolutely, but I'll be very honest with you," Scott said, after recounting her financial struggles and the utter lack of promised help the crisis pregnancy center provided. "If I could do this all over again, I would have an abortion. "

It was a devastating story, but it brings up an interesting question: How common are stories like Scott's? Are crisis pregnancy center tactics like lying to women and scaring them with false threats of illness or death effective at persuading women not to abort?

Certainly, CPCs want you to think that they are effective at talking women out of abortion. Not only does their fundraising depend on it, but these centers have also been successful at getting taxpayer funding in red states, all on the premise that it's in the state's interest to "discourage" abortion, apparently even if doing so means lying to women. In service of this goal, they frequently feature stories about women who were talked out of abortion in their fundraising materials.

But it appears that CPCs are being just as dishonest with their funders as they are with the women who walk in their doors. Nicole Knight Shine of Rewire decided to take a look at client data, collected by the CPCs themselves, and found that, even though these centers give women a hard sell — telling them they will be traumatized, mutilated or killed if they get an abortion — they are really bad at discouraging women from abortion.

"Of the 2.6 million clients who visited crisis pregnancy centers since 2004, 3.52 percent, or 92,679 people, decided against having an abortion," Shine writes. Yep, out of all the women that CPCs themselves describe as "clients who came to the center with initial intentions of Abortion or Undecided and then changed their mind to carry baby to term," fewer than 4% were deterred by anti-choice propaganda.

These numbers might seem startling to most people, but for pro-choice activists and doctors, it's really not. The grim reality that they know and anti-choicers want to deny is that women who need abortions will do anything to get it, even if it means putting their personal safety at risk. That's why banning abortion has no real effect on how common it is. If women can't get it safe and legally, they'll get it on the black market or, worse, do it themselves. That's how determined women are to control their own child-bearing.

Dr. Susan Wicklund, in "This Common Secret", her memoir about being an abortion doctor, recalls a conversation she had with one patient who came to her after accidentally going to a CPC. "The amazing thing," Wicklund writes, "is that they still come. After hearing all that terrible propaganda and lies and being shown inaccurate pictures by places calling themselves some version of a pregnancy counseling center, they still come. They are desperate to end an unwanted pregnancy."

The thing is that CPC centers know this. Shine's numbers come directly from their own database, showing that they they are well aware that the vast majority of women who come in their doors will not be intimidated, much less persuaded, out of their abortions. So why do they keep plugging away at it, when they know full well they are terrible at what they claim they want to do?

It's because preventing abortion has never been and will never be the actual goal of CPCs, no matter what their fundraising materials might say. The real purpose is to shame women for having sex and to spread stigma over abortion, contraception, and any non-procreative sexual activity. The vicious lies and guilt trips they lay on women are not the means to an end, but are the end itself. The point is not really "saving lives", but making women feel scared, guilty, and anxious, as punishment for having sex.

CPCs are just an institutionalization of the Christian right habit of showing up at abortion clinics and harassing people going into them. While these protesters often call themselves "sidewalk counselors," claiming to be there to help women, that's a paper-thin ruse for their true motivations: Shaming women for having sex and turning a private medical choice into a public spectacle.

The relationship runs deeper than just a comparison. Many CPCs, on top of bullying women who walk in their doors, serve as a base of operations for people who want to bully women entering real clinics. They help organize clinic harassment campaigns, providing the protesters with signs and information like the names of the people who work at abortion clinics.

"Just the presence of a CPC in the vicinity of an abortion clinic ups the potential for violence," Kathryn Joyce wrote in Ms. in 2010. "A recent survey by the Feminist Majority Foundation of women’s reproductive health clinics nationwide found 32.7 percent of clinics located near a CPC experienced one or more incidents of severe violence, compared to only 11.3 percent of clinics not near a CPC."

The hostility to women is so ingrained in the CPC structure that it's really no surprise to find out that one CPC in Michigan hired a priest accused of molesting teenagers to be in charge.

"The Rev. Kenneth Kaucheck, 69, was banned from public ministry by the Archdiocese of Detroit in 2009 after church officials determined he had sexual misconduct in the 1970s with a 16-year-old girl he was counseling as a priest," the Detroit Free Press reports. "Kaucheck is now a director at the Gianna House Pregnancy and Parenting Residence, next to St. Veronica Catholic Church in Eastpointe."

The misogynist agenda is why most CPCs don't offer any services that are proven to prevent abortion, such as offering contraception. On the contrary, as Cosmopolitan writer Meaghan Winter found after interviewing at least a dozen CPC staffers, they go out of their way to scare women about contraception, too.

"Again and again, they mentioned claims, which have been debunked, that abortion sterilizes and birth control pills cause cancer," Winter writes.

It's all a lie, but shows that the real goal here is not "life", but about delegitimizing medical care that allows women to have sex without fear of unwanted childbearing. The goal is to make women feel dirty for going to the gynecologist for any other purpose but making babies.

That's why it hardly matters if the women who walk through the doors of a CPC go on to have their babies or have an abortion. The main thing is dumping a self-righteous lecture on a woman, scaring and guilt-tripping her. While they suck at preventing abortion, CPCs are real champions at making women cry. It's time to admit that it's because women's tears, not healthy babies, is what CPCs are all about.