The Bundys won't go away: The family gears up for another battle — which means more embarrassment for conservatives 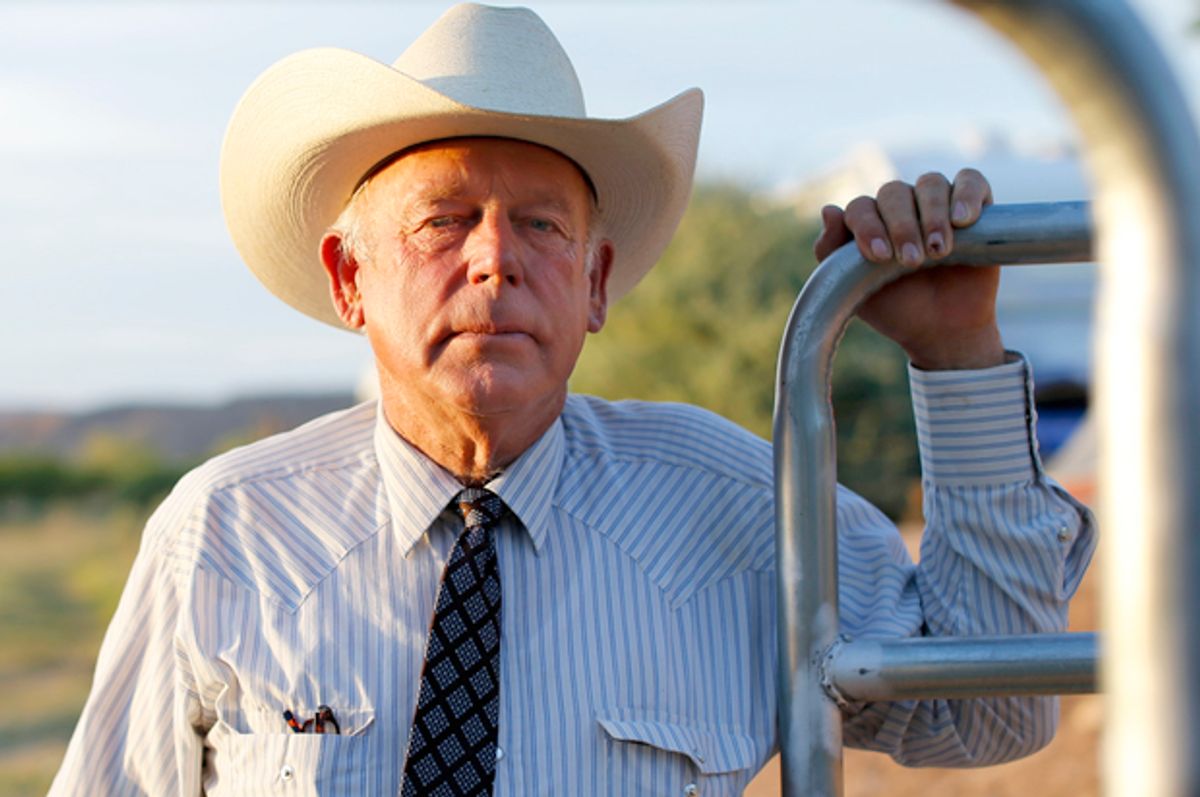 Even though the occupation of a wildlife refuge in Oregon ended in arrests and one death, the right-wing militia movement that swirls around the Bundy family of Nevada is still hard at work, dismantling what was left of the good reputation of the more libertarian strain of conservatism in the western United States.

In the lawsuit, Bundy accuses Reid and his son of conspiring to steal his land to sell to someone "reported to be communist Chinese."

At the same time that Bundy is filing his incoherent scattershot of a lawsuit, a coalition of environmentalist groups has sent a letter to the US Bureau of Land Management, asking the department to remove Bundy's cattle from protected federal lands, where these groups believe they are a threat to threatened tortoise species.

These cattle are the instigating factor in the ongoing saga of the Bundy and their right-wing buddies against the federal government. Bundy has been grazing his cattle on federal lands for years without paying the grazing fees required by law. The government finally got sick of Bundy using taxpayer lands to feed his cows while keeping the profits for himself, and moved to confiscate his cattle as payment for the grazing fees. That's when Bundy and a bunch of right wing militia nuts holed up at his ranch with guns, threatening a bloody standoff. The government backed off, laying in wait for Bundy to do something to expose himself, which he eventually did by flying to Oregon and giving the feds a perfect chance to arrest him unarmed.

At first, conservative media and even some politicians rallied around Bundy, right up until he said some over-the-top racist things that might even give Donald Trump pause, causing deep embarrassment for those who mistakenly thought it was a good idea to back the cause of a gun-waving anti-government crank.

Since that day, the Bundys and their friends have done everything in their power to continue embarrassing the right. The takeover of the wildlife refuge, led by two of Cliven Bundy's sons, was a complete disaster, turning them into even more of a national joke, the kind that even Fox News pundits were afraid to back.

But, as Bundy's ridiculous lawsuit shows, the story just won't go away. Bundy's lawsuit is not only grabbing headlines, and, due to the scattershot approach to picking defendants and his continued posturing like he deserves some special dispensation from having to follow the law, it's yet another reminder of what a major nut he is.

Similarly, his son Ammon Bundy's defense is a joke. While denying that Bundy is an "extremist" or a self-proclaimed "sovereign citizen", his lawyers nonetheless argue that the federal government somehow shouldn't be permitted to own western lands, or at least many western lands. Bundy wants you to believe this government-can't-own-land argument is "originalist" and "constitutionalist", but it's nakedly obvious that he has no legal standing other than a deep desire to get rich quick by buying up quality land on the cheap.

It's not just the Bundys who keep reminding the public that the supposedly principled libertarian conservatism associated with the west is little more than a bunch of cranks raving about how unfair it is that they have to follow the law like everyone else.

One of the people who came out in support of the Bundys is Odalis Sharp of Kansas, who rounded up her huge brood of kids and had them sing, like they were the Von Trapp family or something, for the Oregon militiamen.

After making a big, national production out of what an angelic and Christian mother she supposedly is,  Sharp is in headlines again, after getting arrested and having seven of her children removed from her home by state officials.

The Kansas City Star describes a social worker reporting that  "the five children were interviewed and said their mother spanked them with a rod that left them with bruises and marks, struck them with a belt, slapped them on their faces and private areas, used soap in their mouths and called them names." Five of the children eventually fled, hiding their mother's guns and flagging down a car and begging for help. They testified during a hearing lasting over two hours that they don't want to go back.

Sharp hasn't exactly denied the allegations, instead hiding behind the supposed biblical exhortations to beat your children with a "rod". She also alleges that she's a victim of a government conspiracy, since her 18-year-old daughter, Victoria, was with the Oregon militiamen when they were arrested and witnessed the shooting of militiaman LaVoy Finicum.

Even Michele Fiore, a state representative from Nevada who loudly supported the Oregon militia, is back in the news reminding people of what a nut job she is. Even though, when faced with a real threat of bloodshed, Fiore came momentarily to her senses and talked the occupiers down, she was back to her old tricks, going onto a local TV show and fantasizing out loud about what a bad ass she would supposedly be in a confrontation with the cops.

"I would never ever point my firearm at anyone, including an officer of the law," she said, warming up to the inevitable "but" that was coming. "Unless they pointed their firearm at me."

“Once you point your firearm at me, I’m sorry, then it becomes self-defense,” she added, not explaining how she felt that this kind of shootout she enjoys fantasizing about would come to be.

Hard as it may be to believe, there was once a time when western right wingers garnered more respect than their southern or midwestern counterparts, seen as more "libertarian" and reasonable and less like Bible-thumping wackos. Thanks to the Bundys and their buddies, however, that day has passed, and the nation has gotten a full eyeball of the violent gun fantasies and ridiculous legal theories, which, contrary to popular belief, also tends to come packaged with the same religious fundamentalism and racism that you find in the rest of the country's right-wing enclaves.

But at least one person who got caught up in all this seems to have some understanding that he's made a fool out of himself. Sean Anderson, one of the last Oregon militiamen to be arrested, appeared in court on Wednesday to explain why he released a bunch of videos online declaring that there was going to be a "bloodbath" and telling any wannabe militiamen, "If [law enforcement officers] stop you from getting here, kill them."

In court, Anderson was singing a different tune. "I am very ashamed of it,'' he told the judge, trying to argue that he was in emotional distress and didn't mean the things he said.

As he should be. The more news stories that come out of this crew, the more they embarrass themselves and the conservative movement generally.