Donald Trump's supply-side hacks: His nonsensical tax plan is getting the trickle-down treatment 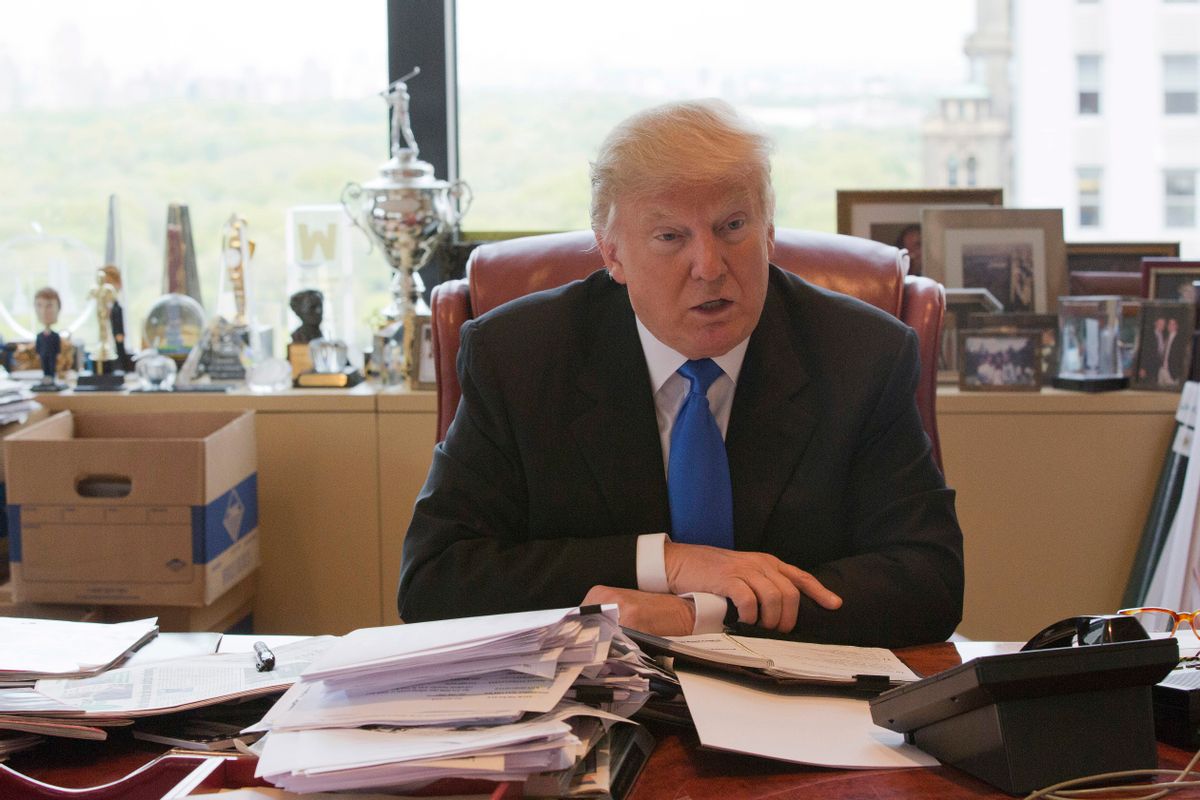 It’s been nine days now since Donald Trump effectively sewed up the Republican presidential nomination, and in that time he’s managed to so thoroughly mangle his position on taxes that at this point it’s impossible to know where he stands. It’s also hazardous to venture a guess, given the high likelihood of another abrupt change in the very near future.

If you haven’t bothered trying to keep track yourself, here’s a quick recap. Early in the race, Trump hinted that he’d raise taxes on the wealthy, but then he put out a wildly regressive tax plan that slashed taxes for the rich while tearing a $10 trillion hole in the budget. But the hints about taxing the rich kept coming, and this past weekend he said his tax plan was negotiable and seemed to intimate that the rich would end up paying more. But then he clarified that statement, arguing that the rich might pay more than they would in relation to the massive rate cut he called for in his plan. It’s confusing as hell, and it’s intended to trick as many voters as possible into believing Donald Trump shares their position on taxes.

Now it turns out that Trump’s plan, which he’s lately described as the first salvo in a broader tax negotiation with Congress, is itself undergoing some changes. Politico reports that Trump’s campaign reached out to two heavyweight supply-side evangelists – the frequently embarrassing Stephen Moore and two-time Senate almost-candidate Larry Kudlow – to make some adjustments to his tax plan so that it doesn’t do quite so much violence to the budget.

Here’s what Moore and Kudlow have in mind, according to Politico:

Among their most notable revenue-generating recommendations is raising the top tax bracket higher from the 25 percent that Trump had originally proposed to 28 percent, according to Kudlow. That would still represent a substantial tax cut for the richest Americans.

Kudlow also said that the threshold for paying no income taxes could “be lowered a bit” — Trump would take 33 million low-income Americans off the rolls entirely — from the original proposed $50,000 level for married couples. He did not specify the new threshold.

According to Kudlow, they submitted their revisions to the Tax Foundation, which is “now preliminarily estimating that the package would expand the deficit by $3.8 trillion — a roughly 60 percent cut.” (Kudlow was apparently not completely forthright in that characterization.)

This is all very preliminary, it seems, but the overall changes don’t alter the fact that Trump is still proposing a shockingly regressive policy that will be a massive boon to the wealthy. Even if Trump does agree to scale back his proposed cut and set the top rate at 28 percent instead of 25, the rich are still getting a terrific deal. For comparison’s sake, the Bush tax cuts (which, at the time, were viewed as extremely generous to the rich) cut the top rate from 39.6 percent to 35 percent. And, on top of that, Moore and Kudlow want Trump to cut the capital gains rate for the rich as well.

It feels like Trump is trying to accomplish several things at once with this flurry of tax alterations. He’s clearly worried about the political impact of the price tag associated with his original plan, so he’s scaling it back some to mitigate its effect on revenues. But the plan still favors the wealthy tremendously and still runs contrary to Trump’s populist posturing about “hedge fund guys” abusing the tax code and “getting away with murder.” Don’t be surprised, though, if Trump agrees to a slightly smaller tax cut for the rich and then tries to present that as a tax “increase” – he telegraphed over the weekend that he will use that deceptive framing to cloud the argument and disingenuously suggest that he favors hiking taxes on the wealthy.

In the meantime, the mere act of soliciting Stephen Moore and Larry Kudlow for tax consulting services is a signal to wealthy Republican donors – whom Trump now needs to finance his general election campaign – that he at least pays superficial attention to their interests.