The science of Jerry and Elaine: The unsettling reasons why some exes keep each other close

Two new studies look at dark personality traits, and how they're connected to break-ups and art 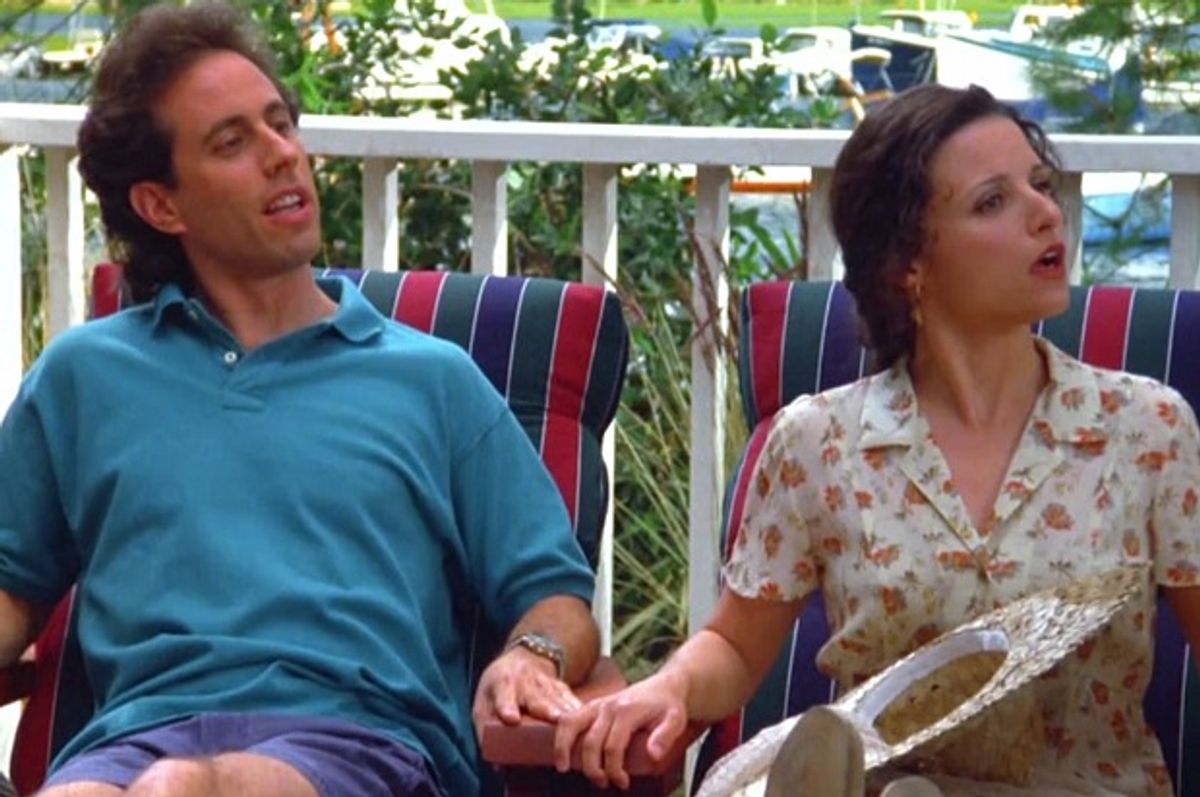 We all have a relationship we look back on and wonder what we were blinded by. The rush of romance? The shock of a spark? A really good kisser. It’s easy to overlook potentially damaging (and dangerous) flaws when caught in the throes of love.

I used to think being friends with an ex was a decent idea, like it established a certain level of maturity between two former partners while also confirming the law of conservation of mass. The logic was that love could not be created or destroyed, but rechanneled into something -- maybe even something good. Imagine my surprise as an unflinching optimist that this is usually never the case. Science has now found this could be for good reason.

A new study has found that those who stay friends with exes tend to exhibit higher degrees of dark personality traits, such as narcissism and psychopathy. Maybe there is some truth when people refer to a “psycho ex” wanting to hang out again.

For the study, researchers from Oakland University asked 860 participants to list and describe what motivates them to remain in contact with an ex. Later, participants were also given a survey to assess who of them exhibited dark personality traits, noting that past research suggests narcissists and psychopaths choose partners and friends for very strategic reasons. This tendency led researchers to believe maybe former lovers are kept around for specific purposes as well.

For many respondents, the choice to maintain some sort of civil relationship was because the person possessed desirable traits such as trustworthiness and reliability. Also, there’s comfort in the familiar.

The researchers also found “practical and sexual reasons” to keep exes around in people who had elevated measures of dark personality traits.

One reason could be control. It’s not fun to see a toy you used to like to play with picked up by someone else, even if you’ve long since decided to shelf the romance. Another reason is the person might like using the fragments of the relationship as a mirror to gaze at their own reflection, the shards glimmering from a time they were adored. It’s a powerful thing, to describe yourself in terms of someone whose life you helped shape, and potentially destroy.

I mean, let’s look think about it in terms of art. How many characters in literature are inspired by ex paramours? How many songs are written with such precision that you feel you’re actually within the song and the relationship?

Take "Seinfeld," for instance. Jerry and Elaine stay friends despite a failed romance. He’s a stand-up comedian while she’s an editor, first in book publishing and later working on the famously flamboyant J. Peterman catalog. It seems the residual romantic energy fuels both their work and the dynamics of the friendship they maintain.

Carrie Bradshaw from "Sex and the City" made a name (and a ridiculously indulgent lifestyle) for herself by writing about her exes. Many of the topics of her columns in the HBO show centered on her relationship with Mr. Big. There were plenty of times in which she accused him of being a narcissist, and yet she continued to hold onto the relationship, as well as write about it weekly. What lies below the surface of these artistic character’s motivations to remain in the lives of their exes and allow their work to be influenced by it? Easy plotline? Relatable frustration? Imp of the perverse?

As it turns out, creative types might have higher levels of dark personality traits than others.

Researchers found narcissism and psychopathy positively correlated with creative achievement. Both narcissists and psychopaths are extremely adept at reading people, a quality that lends itself to creating (and manipulating) relatable characters.

The second component of the study examined the links between creative achievement and psychopathic traits that include boldness, meanness and disinhibition. Boldness, or a reduced degree of stress and fear in potentially vulnerable situations, was found to be positively correlated with creative achievement.

The final part of the study looked at psychopathy in terms of divergent thinking, the ability to come up with innovative or unconventional methods to solve problems or use objects. Like writing a song about an ex-girlfriend if you want to reaffirm a position in her life and also make a living as a musician.

It’s not surprising that creative types tend to have measurably higher degrees of dark personality traits. It takes boldness to produce art in the face of so much rejection, and is a challenge to succeed to spite any number of people: fellow artists, exes and their new lovers.

It’s also not surprising that psychopaths and narcissists might choose to keep exes in their lives. It’s an exercise in both ego and control, an artifact from a time they were valued.

If you couple the two recent studies, it begins to make sense that people who make albums, books and other works of art about ended relationships tend to perpetuate the cycle for dark reasons in a roundelay of manipulation and self-regard. Attention and monetary gain are achieved on a creative project by scattering the ashes of a former flame for the masses to enjoy.