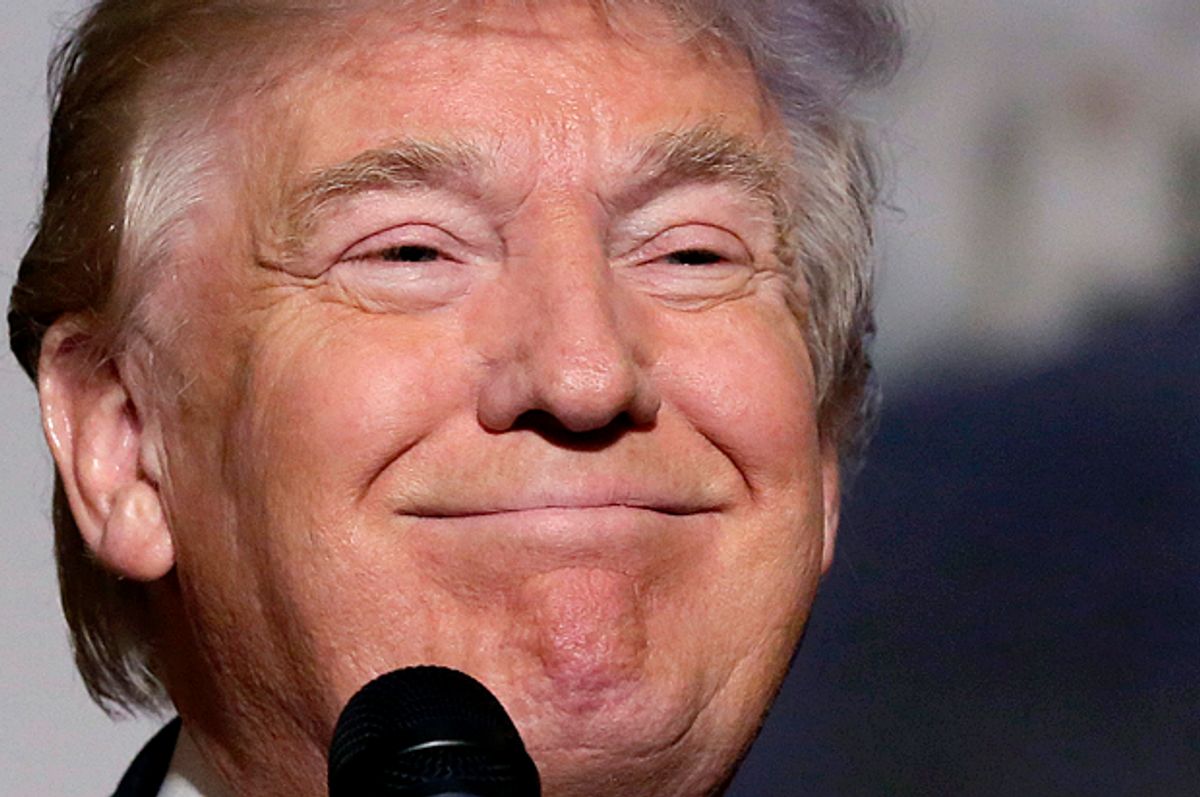 Sometimes it’s difficult to fully grasp the notion that the Republican Party has nominated a real live authoritarian as its 2016 presidential candidate. The American political system is held together by shared adherence to a set of political norms, and Donald Trump has found unanticipated electoral success by promising to trample over many of them. He’s going to ban members of entire religion from entering the United States, he’s going to coerce one of our neighbors and primary trading partners to funding an unrealistic infrastructure project, and he’s going to do all of this through sheer will and determination on his part. The Trump vision of government is “Trump’s will be done.”

In the precious few days since he forced his last remaining competitors from the Republican primary, we’ve seen Trump’s authoritarianism evolve still further. Trump is no longer simply promising to get things done; he’s threatening political retribution against non-governmental entities who might hinder the realization of Trump’s agenda.

The New York Times reported last week on a series of interviews Trump gave describing what his first 100 days in office would look like, and per the nominee, his first day as president would be spent on the phone threatening the heads of major corporations to alter their business models or face punitive tariffs:

On his first day in office, he said, he would meet with Homeland Security officials, generals, and others – he did not mention diplomats – to take steps to seal the southern border and assign more security agents along it. He would also call the heads of companies like Pfizer, the Carrier Corporation, Ford and Nabisco and warn them that their products face 35 percent tariffs because they are moving jobs out of the country.

And just Thursday night, Trump went on Sean Hannity’s Fox News program and strongly suggested that, as president, he’d go after Amazon – and its owner Jeff Bezos – on anti-trust grounds as payback for critical Trump reporting from the Washington Post, which Bezos also owns.

“Amazon is controlling so much of what they're doing,” Trump said of the Post. “And what they've done is he bought this paper for practically nothing and he's using that as a tool for political power against me and against other people and, I'll tell you what, we can’t let him get away with it.”

Set aside the thorny question of whether Amazon actually does represent a monopoly, because that’s not really what is at issue here. What we’re seeing in Trump is a would-be president who proudly and openly maintains a list of enemies, and who seems pretty eager to use the considerable powers of the presidency to inflict retribution on people who he believes have wronged him or are behaving in ways that are contrary to his political agenda. That’s a frightening prospect, and it would represent a flagrant deviation from accepted political norms.

One irony in all this is that conservatives who are both pro- and anti-Trump describe his rise as a reaction to alleged abuses of the Obama era – the use of executive orders to direct immigration policy, the implementation of the Affordable Care Act, and, notably, the (unfounded) accusation that the administration used the IRS to target political enemies. And after years of howling over the “tyranny” they spied in the Obama administration’s every move, the GOP has gone and nominated a candidate who openly aspires to be a tyrant.