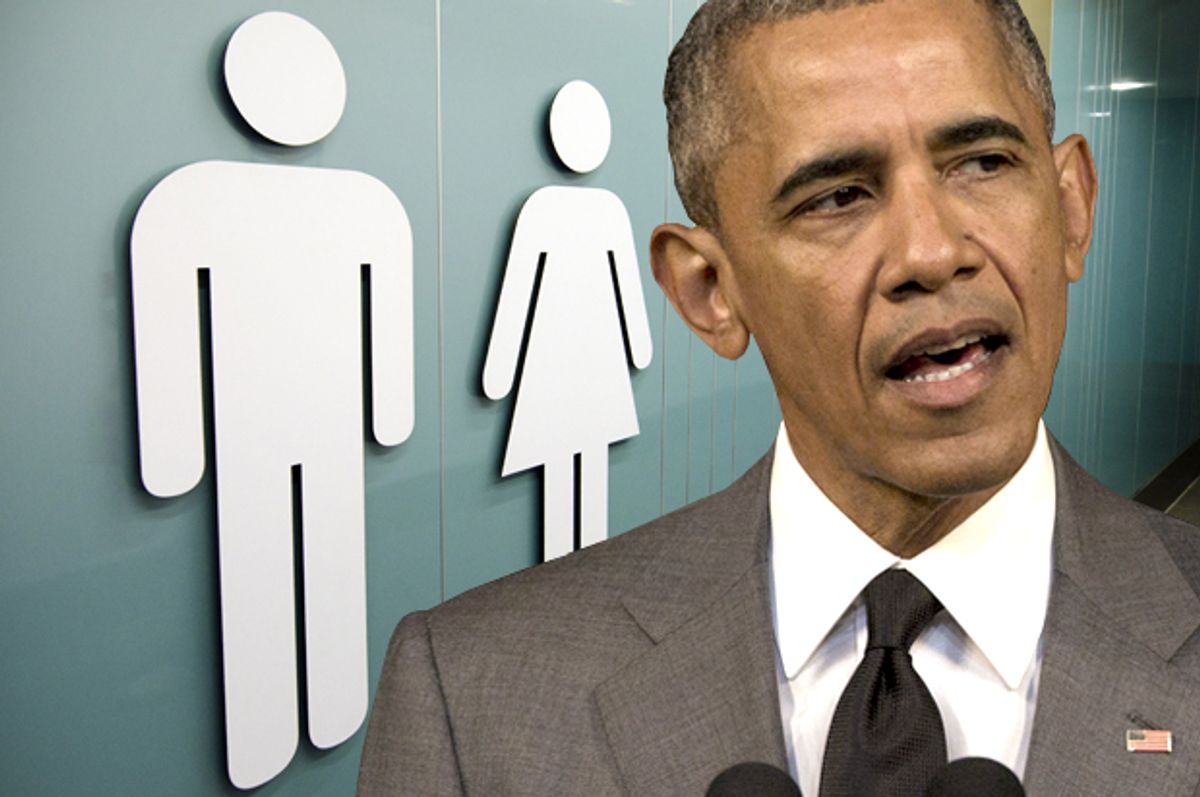 The White House stepped into battle over trans rights this week, announcing plans to send out a letter on Friday to schools across the country that instructs them, to put it in plain terms, to leave transgender students alone.

The letter reminds schools that federal anti-discrimination laws require "schools to provide transgender students equal access to educational programs and activities even in circumstances in which other students, parents, or community members raise objections or concerns."

"As is consistently recognized in civil rights cases, the desire to accommodate others’ discomfort cannot justify a policy that singles out and disadvantages a particular class of students," the letter adds.  Which means that anti-trans bigots should stay in their lane, mind their own business, and stop worrying so much about what body parts are lurking under someone else's clothes.

This letter singles out the bathroom panic, lest there be any question about what is driving them to have to remind schools not to be jerks to students they are supposed to be educating.

"A school may not require transgender students to use facilities inconsistent with their gender identity or to use individual-user facilities when other students are not required to do so," the letter reads.

It is worth taking a moment to remember that hysteria over trans people in the bathrooms was not a thing less than a year ago, and this entire thing is being driven by a conservative movement that, having lost the battle over same-sex marriage, is casting around for some other way to keep their rigid notion of gender essentialism in the headlines.

Perhaps this one reason that the Obama administration has shown no hesitation or reluctance to go all-out in their defense of trans rights, as evidenced both by this letter and by the DOJ's lawsuit against North Carolina's anti-trans law. The timing of this makes the bad faith even more transparent than usual, creating a real opportunity for liberals to strike early and hard, to gain control of the narrative.

Obama getting so directly and publicly involved is a somewhat risky move, of course. The same people who suddenly discovered — the day after the Supreme Court legalized same-sex marriage — that the country's biggest problem was trans women in bathrooms are also the same kind of people who have a Pavlovian reaction to anything the president does. Except they aren't drooling because they're hungry, but because they can't wait to stoke even more paranoia in their base over the prospect of the scary-Democrat-secret-Muslim and his plot to "take over" the U.S. with his use of FEMA camps and Caitlyn Jenner photo shoots.

There's no doubt that Obama's presence in this debate will rile up the right wing nuts even more, at least in the short term. But ultimately going after this hard is the right thing to do, backlash be damned. Having a popular president take a clear, inarguable stand in favor of trans rights sends a message that pro-trans sentiment is mainstream, which is an important territory to stake out when conservatives are trying to demonize trans people, even kids, as weirdoes who can't even be allowed to pee in peace.

Just as importantly, the Obama administration is helping frame the issue in terms that are easy for the general public, who may not be well-educated on the nuances of transgender life, to understand. Which is to say, they are framing this issue primarily as one of bullying and discrimination.

"They created state-sponsored discrimination against transgender individuals who simply seek to engage in the most private of functions in a place of safety and security," Attorney General Loretta Lynch explained in a press conference regarding DOJ actions against North Carolina, which banned trans people from using the bathroom that corresponds with their gender identity.

This is a perfect way to frame the issue. First of all, it's just true: The anti-trans attacks are nothing but a bunch of busybodies whose desire to control other people is so out of control that they want to stick a nose right up your skirt and pass judgment on what's going on under there.

Second of all, it builds on a foundation laid by anti-bullying initiatives like the It Gets Better campaign. The public is well-acquainted with and largely in agreement with arguments against bullying gay students, and so it's just a matter of expanding that framework to include trans students.

Third, and this is critical: It's simple. One doesn't need to know the details of what makes someone trans or how they know they are trans to understand the administration's position. All you need to know is that bullying people for differences — differences that have nothing to do with you — is wrong. While it would be nice if people would educate themselves about the realities of trans people's lives, trans kids can't wait for that to happen. They need relief now, and an anti-bullying initiative is the quickest way to get there.

Already, this framework is putting conservatives on their heels. You can tell, because they're resorting to a childish kind of me-too-ism, claiming that they aren't the bullies, but the meanies who want to make them stop bullying are the bullies. Right-wing media acted like Lynch was personally picking on them by suing to force North Carolina not to discriminate against trans people. David French even tried to argue that DOJ efforts to stop the bullying of trans people is a form of "bullying."

The pretzel logic that conservatives are resorting to was on full display in an editorial in the notoriously right-wing New Hampshire Union Leader, which had an editorial trying to argue that Obama is somehow the one invading privacy and sticking their nose where it doesn't belong.

"We would prefer federal, state and local governments to stay out of the bathroom business," the editorial reads. Which is, of course, an obnoxious lie. The editorial is quite clearly in support of policing bathrooms heavily, using bathroom anxiety as an excuse to go sniffing around people's drawers, demanding that they "prove" their gender and otherwise meddling in other people's business.

Gender is a "creepy obsession on the left," the editorial defensively reads, which is also a laughable argument. It's crystal clear who has an obsession here, and it's definitely not the people who want to let people use the bathroom in peace, without being harangued by those who think you should have to "prove" your gender to perfect strangers to deal with basic biological functions.

The defensive posturing shows that conservatives are well aware that they are on shaky ground here. It's hard to maintain the pretense that you are for freedom and "small government" when you are aggressively backing intrusive laws that exist solely to punish people for making private choices about gender identity that have nothing to do with you. By taking a hard stance on this front, the Obama administration is helping demonstrate to the public what creeps and bullies the anti-trans forces are, which will hopefully help hasten the demise of this constructed right wing panic.