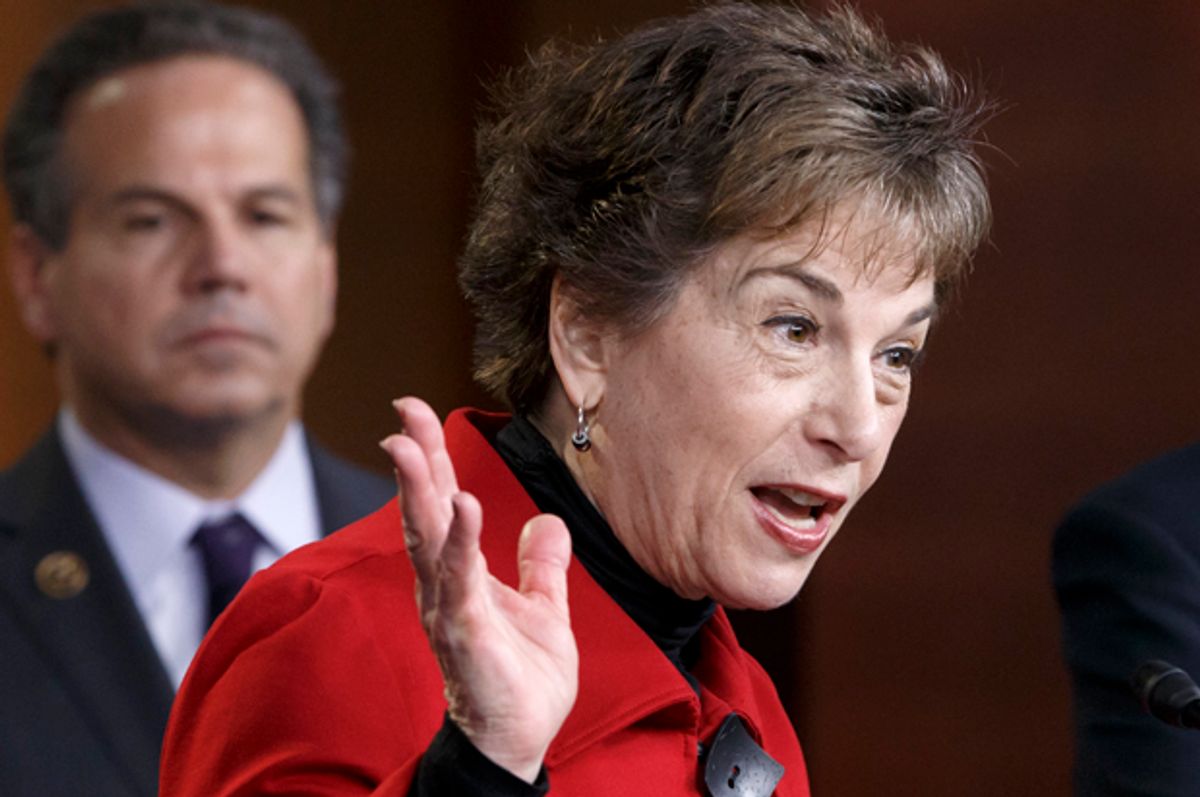 Last summer, a group of anti-choice activists managed to successfully hijack the news cycle with claims that Planned Parenthood was running an underground operation selling fetal tissue for profit. Claims that lurid pretty much always turn out to be right wing urban legends, and this time was no different: Two dozen states investigated Planned Parenthood and found no evidence for these claims. Meanwhile, the activist behind the videos, David Daleiden, has been indicted in Texas, appears to be under investigation in California,  and has been floundering in court after being sued by the National Abortion Federation and Planned Parenthood.

Despite all this, House Republicans used the hoax videos as a pretext to hold hearing supposedly investigating these claims. After it became evident that anti-choicers got nothing, however, Republicans didn't shut down the kangaroo trials. On the contrary, Rep. Marsha Blackburn has been running a seemingly endless, free-form investigation of women's health providers, under the dishonest name the Select Investigative Panel on Infant Lives. Dishonest, because this has been going on for months and not once have they addressed any issues pertinent to infant lives, even though there are a lot of issues — child care, diaper access, health care, nutrition — where government involvement actually could improve infant lives.

House Democrats have gotten aggressive in recent weeks, trying to call attention to the fact that these "investigations" are  not actually investigations, but instead a show trial, with Republicans using taxpayer money to harass and abuse medical providers who dare to help women have healthier lives.

Thursday, Democratic members of the panel sent a letter to Speaker Paul Ryan, asking him to shut down this fake "investigation", on the grounds that the Republican leadership refuses to actually investigate anything, instead spending all their time issuing  subpoenas of doctors, medical students, and anyone else suspected of having anything to do with abortion, with an unsubtle motive of intimidating people, rather than actually learning anything.

For instance, after the panel subpoenaed a variety of doctors and researchers involved in medical research on fetal tissue, the Democrats assert that they asked Rep. Blackburn "to explain what the Panel is investigating and, in particular, how her sweeping demand for the names of researchers, graduate students, lab technicians, clinical staff, and doctors furthers any legitimate aim of this investigation."

In response to a reasonable request to explain why she is subpoenaing all these people — which means putting their name and other identifying details in the public record, where any anti-choice nut with a gun and agenda can find them — Blackburn got snotty.

"No, I am not going to do that," she replied directly to Rep. Jerry Nadler asking her directly during a hearing why it's so critical to make these lists, let's call them blacklists, of people that are conveniently located in one place, should anti-choicers choose to harass and threaten them.

This is not an idle concern. As the letter notes, at least one of the people who has received a subpoena has been subject to death threats that are serious enough that the man who issued them was arrested and charged in Washington.

Now Blackburn has issued a subpoena to Dr. LeRoy Carhart, who doesn't work for Planned Parenthood, putting out a press release falsely portraying the doctor as some kind of butcher and failing to mention that he only performs late-term abortions for medically indicated reasons.

This is especially alarming, because Dr. Carhart already lives under a shadow of serious danger. In 1991, arsonists burned down his barn, killing his dog, cat, and his 17 horses, to punish him for providing women this medically necessary care. ("Pro-life" my ass.) His colleague, Dr. George Tiller, was murdered in 2009 by an anti-choice activist, for providing the same kind of abortion care.

Rep. Blackburn is aware of what kind of threat it poses to Dr. Carhart to dangle him out in front of anti-choice crazies like this, but Democrats say that she has not "shared with Democrats any objective basis for targeting this individual".

The only reasonable conclusion is that Rep. Blackburn and other Republicans on the panel have no interest whatsoever in investigating diddly squat, and this is all strictly about intimidating medical professionals by putting their names out in public, making lurid and untrue allegations about them, and letting the knowledge that there are crazed right wing nuts with guns out there do the rest.

If there's any doubt about that, consider this: The panel has not subpoenaed David Daleiden.

That's right. The guy who started all this, by making hoax videos and doing heavy media rounds where he continually lied about Planned Parenthood,  has not been asked to explain himself in front of a panel that was convened to supposedly investigate his accusations.

If Republicans were actually interested in investigating these allegations, Daleiden would be the person you start with. That's investigation 101: You go straight to the person who says he has the goods, to see if what he is saying holds up at all. But while these panels have been going on for months and months, there has been no interest whatsoever in calling Daleiden to explain himself, much less what evidence he has for his accusations.

It's obvious, of course, why Republicans don't want to call Daleiden in front of the panel. They are scared to death to let the Democrats on the panel have a crack at him, because they know full well that questioning him (which would likely end up being broadcast on C-SPAN) would probably expose him as the sleazy liar he is.

But the refusal to go straight to source makes it indisputable: Republicans have zero interest in finding out the truth about anything. The whole purpose of this panel is to create lists of names associated with abortion provision and research, in order to make people involved with this field feel afraid. It's pure McCarthyism.

Rep. Jan Schakowsky, who is the ranking Democratic member on the panel, even argued that this is worse than McCarthyism, "because now lives, not simply livelihoods are at risk."

It's harsh language, but fair. This entire panel goes beyond even the usual sleazy politics that sometimes inform these kinds of congressional non-investigations. This is about a bunch of politicians targeting individual, private citizens, dangling them out as bait in an environment that they know full well contains many individuals who are moved to express their anti-choice views through violence and terrorism. They are doing this at a time when clinic violence is on the rise, after a year when arsons and blockades went through the roof and there were even three murders at a Planned Parenthood in Colorado Springs.

There's a lot of words for people who demonize and target innocent people in an atmosphere of rising violence and intimidation. But let's be clear: "Pro-life" should never be one of them.