This is how "Lean In" feminism evolves: By smashing that "special place in Hell" that keeps us silent 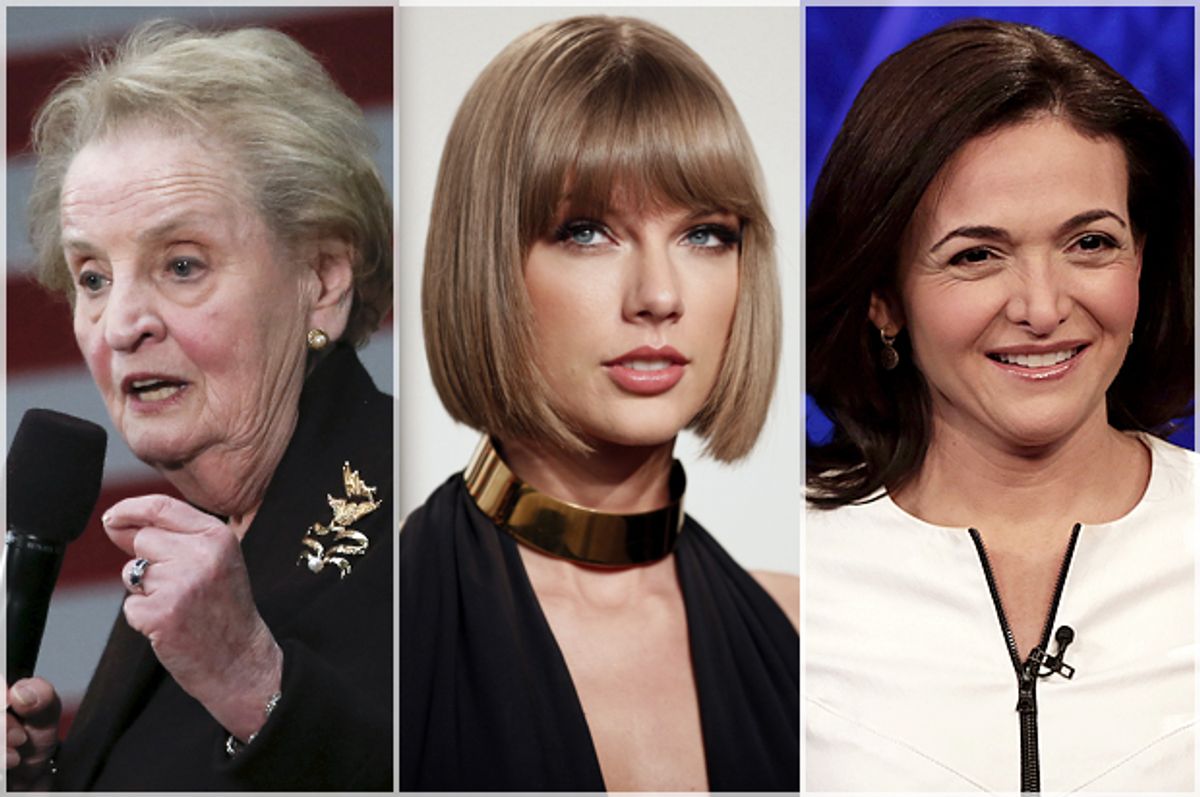 Last week, in anticipation of Mother's Day celebrations across America, Facebook COO Sheryl Sandberg delivered a moving message about her newfound appreciation for the struggles of single moms after the sudden and unexpected loss of her husband. Sharing her note via Facebook (where else?), Sandberg stressed that her substantial challenges don't compare to those of other mothers raising their children without a partner and without comparable financial and social support. The Facebook post was the medium elevated to its highest form: she shared a heartfelt personal experience, thoughtfully reflected on how it is colored by her privilege, and pivoted to her role of activist, advocating for systemic changes that would lessen the burdens single mothers carry today.

That thoughtful reflection was a crucial aspect of her post's appeal that is characteristic of the executive and author. As Elissa Strauss writes in Slate, the note “offers an important modification to her 'get it, girl' feminism, which was widely, and often unfairly, critiqued when Lean In first came out. Sandberg was never as obtuse as many of her critics made her out to be; she didn’t ignore or deny the external factors standing in the way of gender inequality.”

Indeed, every handful of pages in "Lean In" contains yet another self-aware reminder from Sandberg that her encounters with sexism cannot be divorced from her class privilege, often followed by a compelling case that the injustices she faced were worth remedying nonetheless. She frequently makes the argument that greater female representation in the c-suite was important not just for female executives, but all women in the workplace, who could benefit from having a powerful advocate in senior leadership.

This argument is another cornerstone of "Lean In" philosophy, the notion that women have a particular responsibility to help each other. Sandberg uses this personal moral obligation as a jumping off point, suggesting it might serve as a model for feminism as a movement. “Every social movement struggles with dissension within its ranks, in part because advocates are passionate and unlikely to agree on every position and solution...There are so many of us who care deeply about these matters. We should strive to resolve our differences quickly, and when we disagree, stay focused on our shared goals.” Sandberg approvingly quotes Madeline Albright's now infamous, “There's a special place in hell for women who don't help other women,” remark. The line has since been used by Albright in an unsuccessful attempt to persuade female voters to choose Hillary, and by Taylor Swift in an an unsuccessful attempt to persuade female comedians to stop making jokes about her during award shows.

The suggestion that women ought to emphasize harmony and unity over debate is a departure from Sandberg's view of healthy corporate culture. In "Lean In," she emphasizes that employees must feel comfortable enough approaching management with workplace grievances. “Seek and Speak Your Truth,” a chapter of "Lean In," is filled with charming anecdotes about representative instances at Facebook. Practicing his less-than-fluent Mandarin, CEO Mark Zuckerberg's requests that an employee use simpler language to express a concern cause her to blurt out, “My manager is bad,” a strong but clear and forceful statement. A summer intern suggests that Zuckerberg work on his public speaking skills, and he publicly thanks him for the honest feedback and recommends him for a full time offer. This approach to management stresses that honest communication and constructive criticism are crucial tools for better-run and, ultimately, more productive workplaces.

Sandberg is absolutely right to note that critiques of women in positions of power often veer toward the petty and personal, as the largely unfounded attacks on her illustrate. She even notes that women themselves can be the worst offenders. “Obviously, a negative attitude cannot be gender based if it comes from another woman, right?” she writes, “Wrong. Often without realizing it, women internalize disparaging cultural attitudes and then echo them back. As a result, women are not just victims of sexism, they can be perpetrators.”

The fact that women can also be sexist only serves to illustrate that criticism of their beliefs is often legitimate and, thus, warranted. The unfortunate tendency of our culture to levy personal insults at women rather than engage in substantive and respectful debate doesn't detract from the utility of the latter. Constructive criticism in social movements can offer similar advantages to constructive criticism in the workplace, a fact Sandberg herself acknowledges. “Some people felt that I did not spend enough time writing about the difficulties women face when they have an unsupportive partner or no partner at all,” she wrote last Friday. “They were right.” Sandberg's admirable and thoughtful internalization of critiques made "Lean In" as a movement stronger, more effective, and, most importantly, more ethically sound. Her latest evolution proves that women can help other women precisely by engaging in passionate, sometimes public, disputes which cause them to challenge their own beliefs.

Refusal to embrace these opportunities undermines Sandberg's healthy views of privilege on a practical level. A movement that attempts to squash dissent rather than engaging with dissenters will always prioritize the needs of its most privileged, powerful members. Healthy dialogue and, when necessary, debate is a prerequisite of intersectionality. True feminism is about solidarity, yes, but this does not mean that women at the bottom need to swallow their disagreements with women at the top. Instead, it demands that women at the top exercise their privilege to amplify the voices of women at the bottom. And then, more importantly, that they listen to what they have to say.