Bernie or Bust will save us: The foul stench of "lesser evilism" has made our politics useless

Foolhardy? Perhaps. But also our best chance to deliver verdict on New Democrat disaster and awaken political will 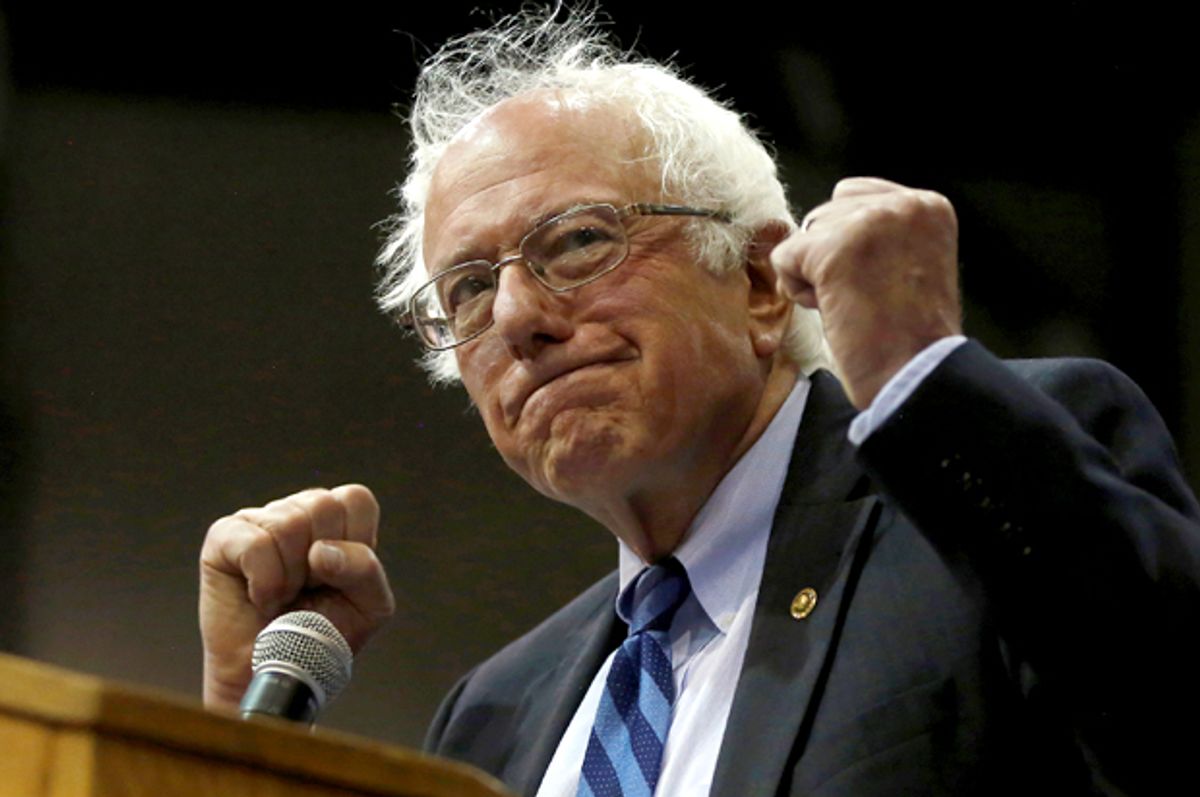 But the case for giving up on Sanders is turning out to be as difficult to make as the one for nominating him. Could it be that the Bernie or Bust movement, however righteous or quixotic, is not about Sanders at all, but another symptom of a high-rolling advertising-driven culture that has eroded all our trust in the social contract? I mean, if you’re looking for someone to blame, Edward Bernays is your man, not Sanders—and certainly not anyone who plans to write in Sanders’s name on a general election ballot.

Bernays, who was Sigmund Freud’s nephew, is the one who brought advertising into everyday life, not as billboard and print ads but as real events. In other words “public relations,” a term he also coined. Bernays kicked off his “torches of freedom” campaign for the American Tobacco Company in 1929 by hiring women to pose as suffragists in the Easter Sunday Parade and light up on cue. The point was to convince more women to smoke, but the whole campaign was dressed up as a grass-roots political movement. In 1954, “the father of spin” was hired by the United Fruit Company to set up local media in Guatemala that would coordinate with the CIA to topple the democratically elected government.

But corporate accounts were only a side-job for Bernays. His career really took off when he set up shop in Washington, D.C., with the motto “If you can use propaganda for war, you can certainly use it for peace.” Working for every president from 1924 to 1961 (besides FDR), his notion that politics should be treated as a form of lifestyle advertising inspired a new generation of political consultants. It was Dick Morris, for example, who convinced Bill Clinton in 1994 to drop the platform he won on and adopt, in Morris’s words, a “consumer rules philosophy." This formulation is misleading. As Adam Curtis argues in his award-winning BBC documentary “The Century of the Self," this formulation is misleading. In the world of advertising, it isn’t the consumer that is king. It is the unconscious. Consultants like Morris have worked hard to convince leaders in both parties that they should ignore the better angels of our nature and speak directly to our unnamable fears and desires.

Is it any wonder that a country buried to its eyeballs in propaganda would treat the first honest politician to come along as some kind of messiah? And is it so unreasonable that Sanders’s more enthusiastic followers should balk at conventional party-unifying tactics as we transition from primary to general election? Ironically, tragically, the Bernaysian strategies of Debbie Wasserman Schultz and others in the Democratic leadership have turned out to be very bad PR for Hillary Clinton, at least for a certain constituency. To be sure, Clinton can thank these same strategies for her frontrunner status. She has emerged from the primaries with the image of a savvy power broker who knows how to get things done inside a broken system, not least by virtue of the cronyism built into the primary process. This is the “New Democrat” ideal, right? The shrewd and alert face of transactional politics. Our very own Karl Rove.

As Matt Taibbi points out, this strategy is more divisive than party leadership understands. It betrays a fundamental willingness to capitalize on—and exacerbate—the most urgent problem we face in American political culture: the crisis of a representative democracy in which representation, statistically speaking, does not exist (as found, for example, by the 2014 Princeton study.) Bernays’s project of turning politics into a sub-discipline of advertising has been so successful we no longer have a functional public sphere.

Sanders, of course, is no saint. His success raising large funds on small donations has given him plenty of advertising muscle to flex, and by all accounts he has flexed it. But here we need to make an important distinction. It is one thing to advertise your position to potential constituents in a contest of ideas. This is about engaging constituents—a function of the public sphere. It is another thing entirely when advertising *is* your platform. This is political realism: the doctrine that power can and should beget more power. Political realists do not deal in constituents, they deal in consumers. And putting one in charge of fixing America’s crisis of trust, incrementally or otherwise, is like putting the petroleum industry in charge of clean energy. Unfortunately for Democrats, this is also where Clinton utterly fails to distinguish herself from a candidate like Trump.

There is ample evidence that voters in 2016 demand a political system that appeals to their rational judgment, not one that preys on the unconscious. Perhaps party leaders, for all their posturing, really were afraid of a New Deal Democrat like Sanders. Perhaps they were so busy with the work of selling Clinton they didn’t have time to read the writing on the wall. Either way, their heavy-handed endorsement has only served to remind reformist-minded Democrats that they are part of the problem. Their only hope now is that Trump’s screaming orange face will scare us back to Clinton’s side. Who knows? Maybe they are right.

But if we really want to treat the problem—not just the symptoms—I would recommend that we stop wringing our hands on cue and take the Bernie or Bust movement for what it really is. Not the ideological purity of dreamers, or the bad sportsmanship of losers, but a struggle to do something responsible with our faith in politics now that we’ve found it again. That’s why the “vote blue no matter who” slogan, typically accompanied by a photo of Trump’s face exactly as it will appear in our post-election nightmares, is so terribly misguided. The whole thing has the look-feel of a Bernaysian PR trick.

As usual, rank-and-file Democrats want to wait until it’s too late and then crucify the messenger—that’s been our strategy ever since Ralph Nader “spoiled” the election in 2000. Isn’t it time we tried something new? Because the political life of a country is like a relationship. The more you ignore the crisis, the uglier it’s going to get. And, make no mistake, Donald Trump and his brownshirt flavored rallies are also a symptom of this crisis. That’s why the question “Wouldn’t Hillary Clinton do better for our country than Trump?” is so badly formulated—not to mention that it has the same foul smell as the prepackaged consent typically served up by both parties, no doubt on the advice of their PR teams.

Yes, it’s gotten that bad. And for many voters, this November will be a time to decide not who to vote for, but how to enact a newly awakened political will, one that aims to correct the anti-democratic tactics of both parties. Bernie or Bust is no doubt a foolhardy and extreme position, not least because it is bound to create all kinds of bad PR for the reformist cause. In the big picture, however, it looks like our best chance—perhaps our only chance—to deliver a long awaited verdict on a disastrous New Democrat agenda responsible in part for every bad decision from the Iraq Resolution to Citizens United.

More importantly, the write-in vote is our last chance to call bluff on the iron fist of political realism, which Democratic leadership have raised again and again against their own constituents by playing us off against bogeymen like Trump. A century of treating the public sphere as if it were a sub-discipline of advertising has robbed us of all but the bluntest of political instruments—without, for that matter, delivering us from the obligation of using them.

Peter Gaffney is a professor of philosophy, visual culture, and the public sphere at University of Pennsylvania and the Curtis Institute of Music, and also editor and co-author of “The Force of the Virtual: Deleuze, Science and Philosophy (2010, University of Minnesota Press)