The Trump spokeswoman defends the indefensible, while Rush reminds us why he's the biggest hatemonger in the game 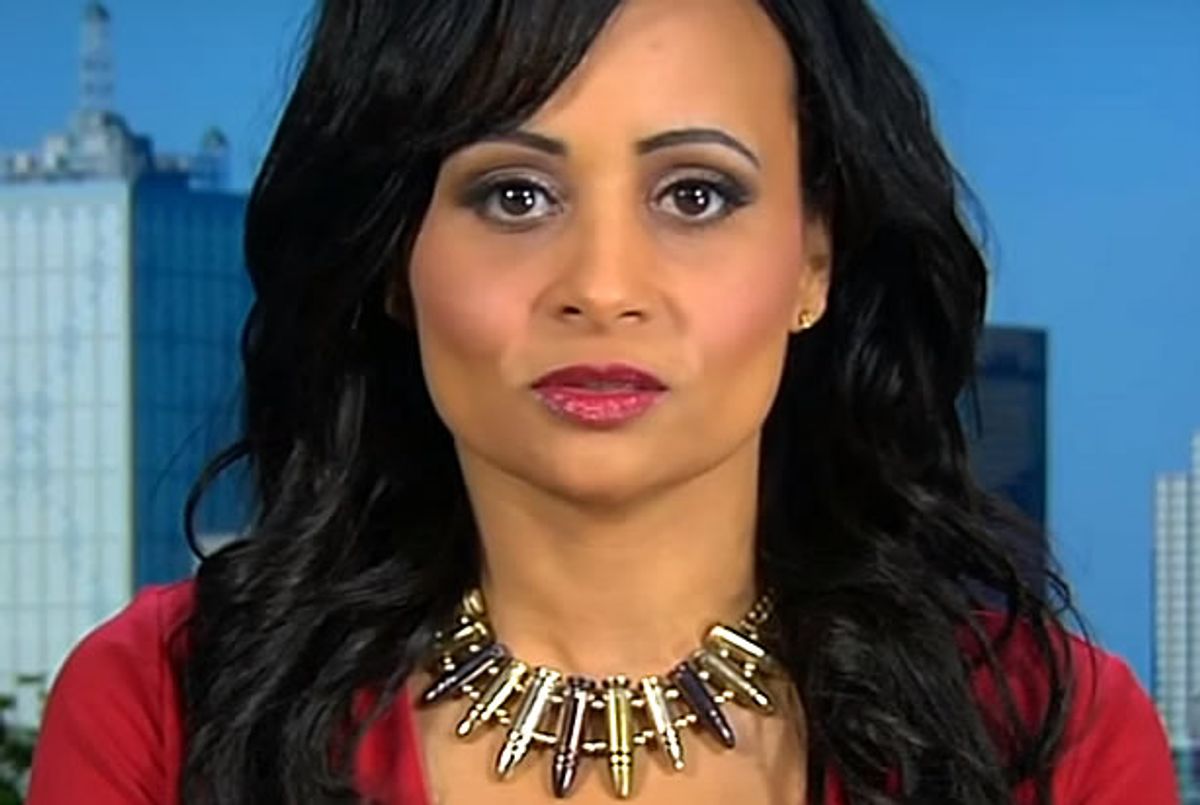 We now know how Trump handles thorny and potentially embarrassing questions. He oh-so-presidentially hangs up on people who ask them and pretends not to be there when the inquirer calls back to restart the conversation.

Faced with pretty damning proof that in the past the bizarrely egomaniacal and yet strangely insecure psychopath who is the presumptive Republican nominee has posed as his own publicist and phoned reporters to urge them to write flattering stories about him, Trump did what he perhaps does best. Denied it. Cut. Ran.

The incident does seem to have resolved the question of who might be White House press secretary in the horrifying event Trump wins the presidency. Himself, posing as someone else. Whee! It'll be such fun!

Amazingly, this was not even the craziest or most disqualifying thing emerging from the Trump camp this week. There was his beloved virulently racist Mar-a-Lago butler who is fond of calling for Obama’s assassination, and the disgraceful statement that Trump’s repeated call for an official ban on Muslim immigration to the U.S. was “just a suggestion.” Just a harmless little suggestion that has fed anti-Muslim violence and terrified little kids.

Where this metastasizing horror show will end is anyone’s guess. Here’s more about the butler, and some other true low points frpm this week.

1. Trump is shocked, shocked I tell you, at the fact that his longtime butler is a shockingly awful Trump man through and through.

Trump’s longtime Mar-a-Lago butler, subject of a charming New York Times puff piece a little over two months ago, turns out not to be such a sweet little puffball after all.

The now retired 84-year-old butler, Anthony Senecal, has long had a penchant for writing virulently racist Facebook posts, many of them aimed at Barack Obama, whom he called a “pus-headed ‘president’” who needs to be “taken out by our military and shot as an enemy agent in his first term!!!!!” (Exclamation points all very much his.)

As Mother Jones first reported, that exclamatory point was followed by this one: “Now comes Donald J Trump to put an end to the corruption in government !!!!” There were numerous similar statements. Different words, same sentiments.

For this serious and subtle grasp of current and recent events, as well as many similar statements, Mr. Senecal was rewarded with a promotion to in-house historian at Mar-a-Lago.

Leaving no doubt that the butler did it, Senecal doubled down on his Trumpian zeal this week by railing against the “Muslim hordes” at our shores and demanding that they all "be shot at the border." This time his platform was NBC, not some measly Facebook post.

Naturally, Trump in his man-of-reason costume, tried to distance himself from this whack job, whose birther views actually seem to make Senecal a fine fit for the Trump operation in general. Whatever backtracking Trump tries to do in the coming months, he seems unlikely to disavow his years of racist birtherism, questioning everything from Obama’s nationality to his Harvard credentials to his patriotism. It is, after all, what got him to where he is today. And he still has many friends, allies and advisers who share the butler’s views and worse.

So you have to wonder, what exactly did the butler do wrong, anyway?

2. Two of the most despicable people in the world join odd forces.

We are talking about George Zimmerman, proud and unrepentant killer of teenaged Trayvon Martin, and pharma nightmare bro Martin Shkreli. First, Zimmerman charmingly put the gun he used to kill the unarmed black kid up for auction on GunBroker.com, and as an added bonus for the racists and white supremacists who would want to pay big bucks for such a wonderful memento of American culture, said the money he raised would be used to fight the group #BlackLivesMatter.

Does he have to try to come up with ideas for being the most monstrous human ever or does it just come naturally?

There may not be much justice in the world, and less in this case, but in the rough justice of Twitterworld Zimmerman was trolled badly. He received faux bids from Racist McShootface, and another tweeter wrote, “The next time I hear the name ‘George Zimmerman,’ I’d like it to be followed by ‘was torn apart by alligators.’” Still another wondered when he would auction off the gun he used to assault and terrorize his girlfriends.

The item was removed from the auction website, but not before another atrocious human got a chance to weigh in with his ill-gotten gains. Martin Shkreli, the pharma bro/hedge funder who became famous for jacking up the price of a life-saving drug for people who cannot afford it and bragging about it, expressed an interest in Zimmerman’s weapon.

Shkreli even perversely claimed he would make such a purchase for a good cause (unlike, say the Nazi memorabilia collectors who were the likely intended market). “The only reason I would bid on the Zimmerman gun would be to destroy it or put it in a museum as a disgusting reminder of racism in the US,” he tweeted.

Yes, in Shkreli’s insane imagination, this could actually be his version of rehabilitating his image.

Novelists, satirists, hang up your laptops. Reality has far outpaced anyone’s ability to imagine the worst.

Much like her boss, Katrina Pierson will literally say anything even if that thing directly contradicts something she just said, or even something contained in the same sentence. That is because things you once said, or even have said repeatedly can always retracted, denied or contradicted in this Teflon world where nothing ever seems to stick.

Trotted out to comment on Trump’s statement this week that his oft-repeated call for a ban on all Muslims entering the U.S. was simply a “suggestion,” a harmless little trial balloon of an idea in his inflated pumpkin of a head, Pierson said this to Wolf Blitzer. It’s Obama’s fault.

Well, not exactly, but yeah, kind of. Here’s how it went down: Wolf asked Pierson if her boss was “now moving away from the right, shall we say, towards the center as he worries about a general election?”

Pierson responded reflexively: “Not at all.” (Or at least not for now, unless moving away from the right starts to seem like a good idea in which case, yes he certainly will!) Little headwheels turning fast, Pierson then embraced her innate ability to weave pretzel logic and continued: “What Mr. Trump is saying is that yes, all of his policies are suggestions like any other candidate. We all recall that time when if you like your doctor, you can keep your doctor. Guess what? That actually didn’t say the policy.”

She was referring to Obamacare and the claim that people would not have to change their doctors to enroll, a claim the right wing has been dining out on ever since to prove that no one is a bigger liar than Obama, so don’t even start with us.

What does this have to do with Trump’s bizarre behavior or refusing to be bound by anything he has ever said or done?

Nothing. Nothing at all.

4. Have no fear, Rush Limbaugh is still completely awful.

Trump may be the busy little backtracker, but certain things remain constant and reliable, Rush Limbaugh's awfulness a prime example. The issue of which bathroom transgender people should use has gotten all the hatemongers riled up lately, and though he no longer exactly leads his flock as he did in his heyday, Limbaugh is still in there fighting to say the stupidest, most outrageous thing.

On his show Friday, Limbaugh demonstrated his subtle grasp of the issues when he ranted that we might as well legalize rape since bathrooms are no longer just for one gender or the other. It was vintage Rush stuff when he told a caller concerned that his wife and daughter might be victimized in the bathroom by someone not living the gender they were born with: "Civil rights," Rush scoffed. "You could legalize rape if you called it the Civil Rights Act of 2016."

We will not pretend to understand the logic at work in that statement. Tried. Can’t. There are zero cases of transgender people raping anyone. Zero. Some will point out Silence of the Lambs. Sane people will point out: This was fiction.

But there is a group of people who are dangerously obsessed with people’s genitals in this country. They are not trans. They are Rushians. They need to stop.

Per RightWingWatch: Stone told Jones and another guest, Gary Heavin, the founder of the fitness business Curves who just happens to be a 9/11 truther and right-wing movie producer, that he fears for his life because his nemeses Bill and Hillary Clinton own and operate a "machine that has a trail of bodies as far as you can see.”

This from a man who has called for Hillary Clinton to be executed, also that treasonous socialist, Bernie Sanders.

Would-be Stone assassins should be aware that he has increased his security, because those evil "Clintons have a track record” of beating and killing anyone who stands in their way.

No one really doubts that Stone has already written much of the script Trump will follow in the general election against Clinton.