The plaintiffs in Zubik v. Burwell are wrong, but Justice Kennedy won't pull the trigger and rule against them 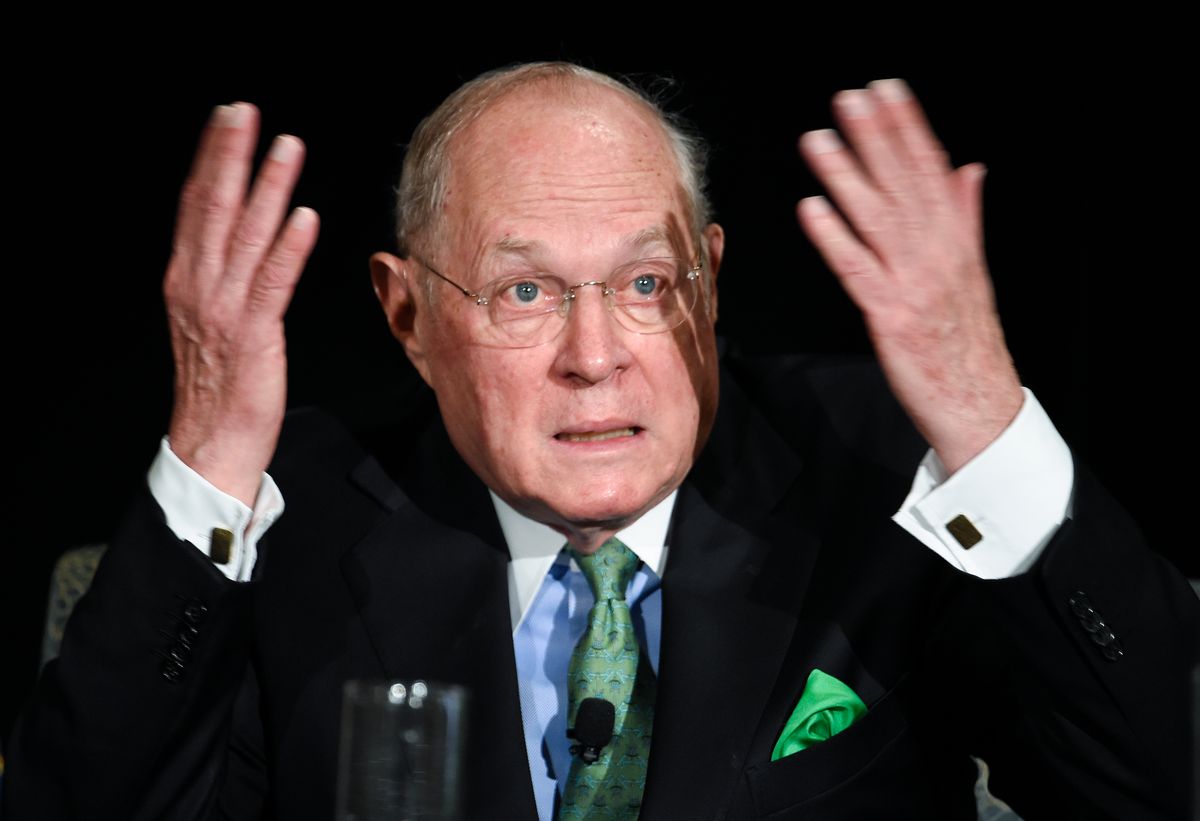 After temporarily becoming a hero to liberals after writing a Supreme Court decision legalizing same-sex marriage last summer, Justice Anthony Kennedy has returned to his true form, as a sniveling coward afraid to stand up to religious fanatics who think they are entitled to control the private lives of everyone else.

Monday morning, the court released an unsigned opinion remanding a major contraception access case back to the lower courts. The case, Zubik v. Burwell, is about a group of employers, mostly religious non-profits, who believe that an employer's "religious freedom" gives them broad powers to interfere with the private sex lives of their employees. The case should be a straightforward one, with the court refusing to indulge employers who want to meddle with the private lives of their employees, but apparently Kennedy is too much of a coward to pull the trigger and put an end to this endless, ridiculous controversy over women who want to use contraception and their bosses that want to stop them.

At issue is a provision in the Affordable Care Act that requires insurance plans to cover a range of preventive services without a copay, which is intended to save money by encouraging people to get care that prevents expensive health problems down the road. The HHS included contraception services in the list of preventive services, after the Institute of Medicine issued a report outlining how no-copay contraception reduces unintended pregnancy and helps women space births, which reduces costs and improves birth outcomes.

But it also allows women, especially low-income women, have non-procreative sex with fewer headaches, and thus conservatives exploded in outrage. (Given a choice between making sex more fraught for women and improving the health of actual infants, the "pro-life" right chooses the former every time.) While the initial burst of outrage was wide-ranging and involved heavy use of the word "slut," conservatives carefully crafted a cover story to undermine women's reproductive health care access while pretending that this had nothing to do with sex: "religious freedom."

A number of employers have come forth with claims that it violates their religious freedom to offer insurance plans that cover contraception. Rather than dealing with this in court, the Obama administration offered a compromise position: Religious employers don't have to offer insurance plans that cover contraception. All they need to do is sign an opt-out form, which will allow the insurance companies to offer the coverage to women directly.

If the objection really had been to "paying for" contraception, then this compromise should be more than enough. But of course, it's not and never was about employers wanting to put distance between themselves and "sin," It's about conservatives trying to find any way they can to make contraception harder and more expensive to get, feeding twin obsessions with controlling women's lives and making life unnecessarily mean and difficult for low-income people who would struggle to afford $50 a month out of pocket for contraception pills.

And so a handful of anti-contraception employers have argued that even filling out a form is somehow a violation of their religious liberty, an argument that one can only buy if one agrees with the end goal of giving employers a vote in how women conduct their private sex lives. Right now, the Supreme Court has three justices who can be relied on to consistently vote against women having any rights to control their bodies whatsoever, four justices who are firm believers in reproductive rights ... and Anthony Kennedy, who is all over the map on these issues.

This is where the cowardice comes in. Kennedy is not a stupid man. He has to know that employers who claim that it's a huge burden to their "religious freedom" to fill out a form are rolling out an argument so disingenuous that the real-life Jesus would be calling them out for their dishonesty. He could have simply sided with the liberals, told the employers to suck it up and fill out the form, and put an end to all this. But instead, he seems to have used his power as the swing vote to send this case back to the lower courts, demanding that various involved parties work out some kind of "compromise".

“The parties on remand should be afforded an opportunity to arrive at an approach going forward,” the opinion reads, “that accommodates petitioners’ religious exercise while at the same time ensuring that women covered by petitioners’ health plans ‘receive full and equal health coverage, including contraceptive coverage.'”

A nice idea, but come on, he has to know there's no way that will happen. That's because the plaintiffs are not interested and have never been interested in "religious freedom". The goal here is stopping women from getting low-cost contraception, full stop. Any compromise that protects a woman's right to equal health care access and privacy is unacceptable to them, because the goal is stripping women of equality and privacy.

These are people who pretend that it's onerous to sign a form. They have no shame, no decency, and no interest in good faith compromise.

Punting a case where the plaintiffs are so clearly arguing in bad faith is a coward's move that suggests that Kennedy knows that he needs to rule against the plaintiffs, but is too afraid to do the right thing, knowing that Fox News will say he's being mean to nuns by denying them their "right" to fiddle with the sex lives of women who work for them.

The only result is that this ridiculous case is going to go around in circles. The lower courts will fail to come up with an acceptable compromise because the plaintiffs will flatly refuse any plan that allows women access to affordable contraception. This will almost surely be back on the Supreme Court's plate in a matter of months.

The only apparent purpose in stalling is so that whatever happens, it won't be on Justice Kennedy. If President Obama gets his appointee, Merrick Garland, affirmed, then there's five solid votes for common sense, and Kennedy doesn't have to worry about being the swing vote. Or, on the off chance that Republicans can stall the confirmation until they get a Republican in office, Kennedy can hide in that guy's robes when they vote that women should be denied contraception access to suit someone else's religious beliefs.

But this kind of evasion of professional responsibility is not befitting a Supreme Court justice. Kennedy took this job to make legal judgments. He shouldn't shun this basis responsibility just because a few meanies on Fox News will say nasty things about him.