Bernie's only way forward: Sanders must campaign harder than ever and believe he can win

In reality, Clinton is this year’s George McGovern and Sanders is the best general election candidate for Democrats 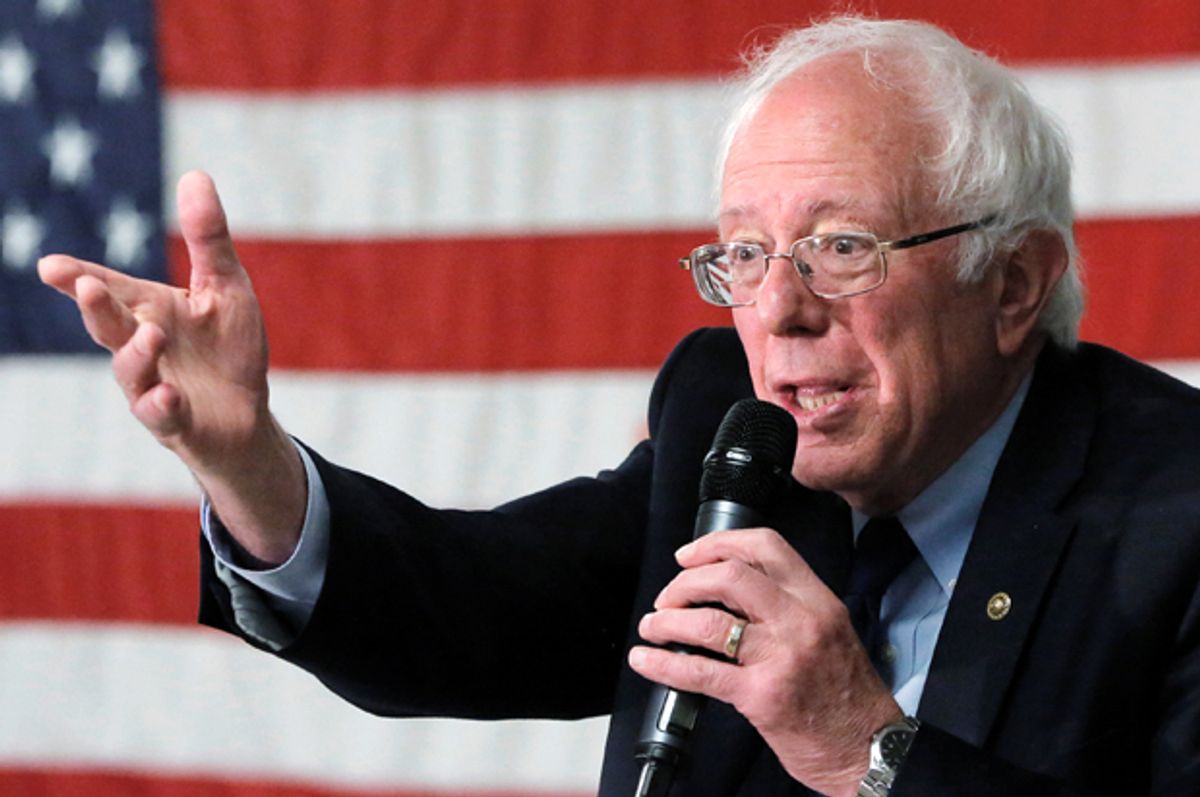 Superdelegates exist to elect a candidate like Bernie Sanders, not Hillary Clinton. As stated by

As stated by NPR, “Though they aren’t bound by the results of primaries or caucuses, superdelegates will often throw their support to whomever they think will make the stronger presidential nominee in the general election.” In 2016, only one Democratic candidate rivals Donald Trump in negative favorability ratings and faces the potential repercussions of a year-long FBI investigation.

The other candidate is named Bernie Sanders, and Vermont’s senator just forced a contested convention that FiveThirtyEight, The New York Times and others thought was impossible. In reality, Hillary Clinton is this year’s George McGovern and Bernie Sanders is the best general election candidate for Democrats. Bernie defeats Trump in an average of polls by 13 points, while Clinton only beats Trump by 5.7 points, and is known to lose even 50 point leads over opponents.

Remember, this 5.7 points lead over Trump exists before the FBI discloses its findings.

What do super delegates loyal to Clinton think will happen to this lead after the FBI discloses its findings?

In doublespeak of epic proportions, DNC Chairwoman Debbie Wasserman Schultz is quoted in The Washington Post (here’s the video of her CNN interview) clarifying the role of superdelegates:

TAPPER: Hillary Clinton lost to Bernie Sanders in New Hampshire by 22 percentage points, the biggest victory in a contested Democratic primary there since John F. Kennedy, but it looks as though Clinton and Sanders are leaving the Granite State with the same number of delegates in their pockets because Clinton has the support of New Hampshire’s superdelegates, these party insiders. What do you tell voters who are new to the process who say this makes them feel like it’s all rigged?

WASSERMAN SCHULTZ: Well, let me just make sure that I can clarify exactly what was available during the primaries in Iowa and in New Hampshire. The unpledged delegates are a separate category. The only thing available on the ballot in a primary and a caucus is the pledged delegates, those that are tied to the candidate that they are pledged to support. And they receive a proportional number of delegates going into the — going into our convention.

Unpledged delegates exist really to make sure that party leaders and elected officials don’t have to be in a position where they are running against grass-roots activists. We are, as a Democratic Party, really highlight and emphasize inclusiveness and diversity at our convention, and so we want to give every opportunity to grass-roots activists and diverse committed Democrats to be able to participate, attend and be a delegate at the convention.

TAPPER: I’m not sure that that would — that answer would satisfy an anxious young voter, but let’s move on.

First, Debbie Wasserman Schultz believes “Unpledged delegates exist really to make sure that party leaders and elected officials don’t have to be in a position where they are running against grass-roots activists.” This makes little sense since superdelegates have ensured Bernie Sanders (the embodiment of grassroots activism) is cheated in the delegate count, even when defeating Hillary Clinton by wide margins. Also, the fact that there’s such a wide disparity between the value system of grassroots activists, and Democratic Party leaders, highlights exactly why 33% of Bernie voters will never support Clinton.

Second, if superdelegates care about winning, they should also care about the FBI investigation. In February, Lt. Gen. Michael Flynn explained why Hillary Clinton should “drop out” of the race on CNN with Jake Tapper:

Washington (CNN)President Barack Obama’s former top military intelligence official said Hillary Clinton should pull out of the presidential race while the FBI investigate her use of a private email server for official government communication while secretary of state.

Lt. Gen. Michael Flynn, the retired chief of the Defense Intelligence Agency, made the call in an interview with Jake Tapper on “The Lead.”

“If it were me, I would have been out the door and probably in jail,” said Flynn, who decried what he said was a “lack of accountability, frankly, in a person who should have been much more responsible in her actions as the secretary of state of the United States of America.”

By the way, the year-long FBI probe is not a “security review.” James Comey just confirmed it’s an FBI investigation. The FBI investigates whether or not crimes have been committed. They don’t conduct civil cases and Clinton’s emails didn’t write or store themselves. For confused Hillary supporters, I explain in this YouTube segment why Clinton likely faces criminal indictments.

Furthermore, Clinton is indeed the “subject” of this investigation, especially since Bryan Pagliano (the person hired to setup her server) was granted immunity and only one person owned the server. Hillary Clinton will be interviewed by the FBI very soon and her top aides have already been interviewed. Therefore, just imagine Donald Trump in Clinton’s position.

What would you be saying, as a Democrat, if a Republican acted like Hillary Clinton?

Then, of course, there’s the issue of why Hillary Clinton owned a private server. The former secretary of state is quoted in CBS News explaining why she chose to circumvent U.S. government computer networks:

“I opted for convenience to use my personal email account which was allowed by the State Department because I thought it would be easier to carry just one device for my work and for my personal emails instead of two,” Clinton said.

... But Clinton also suggested she would resist any attempts by Congress to subpoena the server, which she insisted was secure.

“The server will remain private and I think that the State Department will be able over time to release all of the records that were provided,” Clinton said. She said the email system was initially set up for former President Clinton’s office and that it had “numerous safeguards” and had suffered no security breaches. She also said she never sent classified information by email.

It seems like ancient history now, but there was a moment when Clinton refused to hand over her private server to the FBI. Then there was the belief the Clinton never sent or received (22 Top Secret emails disproves this claim) classified information. Overall, the excuse of “convenience” is ludicrous, and the FBI almost certainly knows the political utility in hiding correspondence from government networks.

Say goodbye to Clinton’s 5.7-point lead in polls over Donald Trump, when the FBI discloses its findings. Even without indictments, this minimal lead will evaporate with knowledge that Clinton was either reckless, or jeopardized national security in some manner. If the FBI recommends indictments, Clinton will be forced to drop out of the race; the biggest reason Bernie needs to campaign harder than ever.

Aside from the email fiasco, Hillary Clinton would have a difficult time against Trump. Independent voters would flock to the reality show star, especially since Clinton had no problem accepting his money. General elections are about being able to differentiate between candidates, and both Clinton and Trump are wealthy New York politicians who socialize with one another. Ironically, Trump is less hawkish than Clinton, as illustrated in Vox piece titled "Neocons for Hillary." In an anti-establishment year, Trump would be seen as the populist, while Clinton would be the corporatist advised by Henry Kissinger. Every Trump scandal would be mitigated by a Clinton scandal; past or present.

In terms of a general election, Bernie Sanders would gain the majority of independent voters (please read a brilliant piece by Riley Waggaman titled "Bad News for the Clinton Campaign: Independents Are Allowed to Vote in the General Election"), and defeat Trump in swing states because of this advantage. Remember, a general election isn’t a closed Democratic primary. 43% of Americans identify as politically independent.

Bernie Sanders must continue to campaign, and expect to win the contested convention, especially since the FBI has yet to disclose its findings. If the tables were turned, Clinton would have already accused her opponent of treason. Bernie Sanders needs to campaign harder than ever, because the Democratic Party will need him, especially after the media frenzy pertaining to emails and indictments.