"The Daily Show" is dead to me: Trevor Noah will never, ever be good at his job -- also, thanks a lot for Donald Trump

We no longer expect Noah to be Jon Stewart. But the show has gone edgeless and dull just when we need it the most 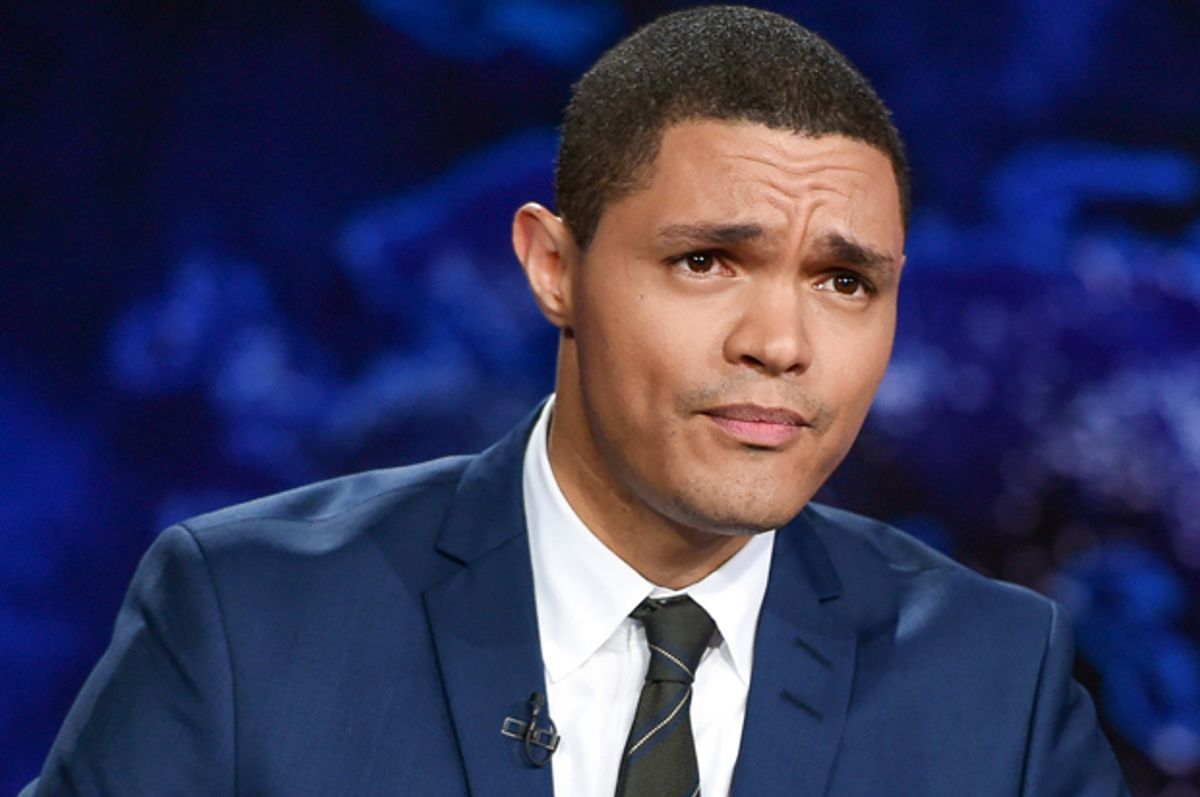 Ever since Trevor Noah was announced as Jon Stewart’s successor as host of “The Daily Show” he has heard the same echoing line from Stewart supporters: “I served with Jon Stewart. I knew Jon Stewart. Jon Stewart was a friend of mine. Trevor Noah, you’re no Jon Stewart.”  Channeling our own inner Lloyd Bentsen facing off to Dan Quayle in the 1988 vice presidential race, we have all imagined telling Noah that he has no business being compared to one of the greatest political comedians of all time.

But here’s the catch. Unlike Quayle who stupidly initiated the comparison in an effort to make himself look qualified to serve as vice president, Noah has been the first to ask everyone to stop comparing him to Stewart.

Noah has not once, not ever, suggested he has anything in common with Stewart.   Sure he tried to reassure Stewart fans on the first night of his show that things would not be drastically different, but all in all his main line has been to describe himself as a different sort of comedian.

When I wrote back in November about the ways Noah’s version of “The Daily Show” differed from Stewart, I heard from his fans too.  We did a data analysis of the 548 comments on that piece and found that about 40 percent of Noah supporters either insisted that Noah was not Stewart and shouldn’t be compared to him or suggested he deserved more time as host before being criticized.

Noah has also claimed he needs more time.  As he explained recently in The Guardian, “I’m trying to build something from the ground up.”  But, as Forbes recently reported, Noah is now 100 shows in—hardly a newbie-- and his ratings remain 37 percent below Stewart’s.

Since stepping into his new job, Noah has come under almost constant fire. Maureen Ryan of Variety recently went after Noah’s lame lack of edge: It’s “as if our reliable attack dog had suddenly lost its teeth and self-medicated with Xanax.”

Even John Kasich remarked, before ending his own campaign, that Noah’s version of “The Daily Show” was tanking and that Trump was benefitting from the fact that Stewart was no longer at the helm.

As Hot Air reports, there has been a real decline in the social significance of “The Daily Show” this election.  Folks simply don’t share clips from the show the way they used to: “First of all, the zingers aren’t really as zing worthy as they once were. And perhaps more to the point, they probably don’t hurt as much because there just aren’t that many people watching.”

Willa Paskin described Noah’s “The Daily Show" as flat and insignificant in an election that has been screaming for edgy, satirical evisceration:

“He’s out to neutralize, not to awaken. How did the program devoted to scaling bullshit mountain in all its incarnations, the program that once had a gospel choir sing ‘Go fuck yourself’ to a Fox News correspondent, come to feel so beside the point?”

This is all to say that it is time to actually start listening to Noah and realize that, as long as he remains as host, “The Daily Show” will not now nor will it ever be a major source of political satire.  It will not offer comedy that informs and entertains.  The difference between Noah and Stewart will not simply be the fact that Noah is an outsider to the U.S. political process—it will be that Noah just doesn’t care that much.

It’s worth remembering that Noah himself made a point of telling the public that when he took over the show was going to stop going after Fox News.   So why should we be surprised that the show has abdicated its place as a source of politically significant comedy?

If anything Noah now seems annoyed that he is still asked why his show has no political edge.  In The Guardian interview he remarked:

If you are a real Stewart fan, Noah’s line rings oddly familiar.  And it should.  Because Noah is effectively offering a hyped up rendition of the line Stewart famously gave when he appeared on CNN’s “Crossfire” and told Paul Begala and Tucker Carlson that it was not his job to inform the public, but rather to entertain them.  As Stewart called on CNN to do their job, he reminded the “Crossfire” hosts that the show that led into his on Comedy Central was “puppets making phone calls.”

So both Noah and Stewart found themselves defining their roles as comedic entertainers rather than serious reporters.  That stance, in fact, is commonplace for political comedians who walk the fine line between offering the public important correctives to misinformation while also trying to bring ironic levity to dark times.

The question is nothing new and Stewart’s answer was as predictable as Jonathan Swift’s would have been.  All political satirists make a point of insisting that they should not be a source of knowledge; they are just entertainers.

Noah’s answer, though, defines what makes him fundamentally different from Stewart.  First, Noah actually mocks those viewers who came to rely on the show for journalism, calling their expectations “ridiculous.”  In contrast, Stewart repeatedly noted that his show was—sadly—having to fill in for failures in our news media.  Stewart knew that what was “ridiculous” was the news; not his viewers who came to increasingly trust him to expose “bullshit mountain.”

But that’s not all that separates Noah from Stewart on this question.  Noah quips that the show before him is “cartoons fucking each other in the ass” and the one that follows him is “more fucking in the ass,” proving, according to him, that he is on a comedy network.

The fact that he refers to Larry Wilmore’s “The Nightly Show “ as “more fucking in the ass” barely deserves comment.  It’s not just disrespectful to the important work done by Wilmore and his team; it’s truly incomprehensible.

When Stewart was asked about his serious role in the world, he accurately reminded his interviewers that his show was preceded by a puppet show called “Crank Yankers.”  Noah, in contrast, made up an answer that associated two sharp satire shows with ass fucking.

So there you have it.  In one comparison of the comedians in similar situations, Stewart followed in the footsteps of a number of great political satirists; Noah, in contrast, was crude, disrespectful, and –perhaps most importantly—just plain wrong.

We’ve had multiple clues that Noah might lack integrity. From nasty tweets, to joke poaching, to fake Twitter praise, the comedian has come under fire for a number of practices that are cause for concern and that set him apart from his predecessor.

But here’s the real reason why Noah is no Jon Stewart and never will be: their comedy has nothing in common.

Satire geeks divide political comedy into two camps.  One, associated with the Roman satirist Horace, is gentle, mild, mockery that points out our foibles and follies. The other, associated with the Roman satirist Juvenal, has a sharp edge that aims to expose social failures and incite change.  Horatian satire laughs at hypocrisy; Juvenalian uses passionate sarcasm to expose evil. Horatian satire is light. Juvenalian is serious.   They both use irony, puns, and parody to entertain their audience—but only one type of satire has any real social significance.

And that is why if Pew Research did a study today of Noah’s viewers they would not have the same sort of findings they did when Stewart was at the helm and could boast of the most informed viewers.

At best Noah offers his audience the lighter Horatian version of satire.  But it’s worth asking whether he really can claim to do political satire at all.  Sure “The Daily Show” still has offered some sharp political satire since Noah took over—but most of that has come from the correspondents and not Noah himself.

The Guardian describes his style as “a mix of observational comedy and knowing jabs at racial stereotypes,” which has little, if anything, to do with political satire.

But for fans of Stewart-style comedy, it’s even worse.   In Noah’s efforts to add “nuance” to the show he often just parrots the mainstream media and offers pieces that simply reinforce the status quo and support the establishment.

This has been the case with his recent coverage of the Bernie Sanders campaign; where rather than use his comedy to ask some important questions about election fraud, two-party politics, or media bias, Noah has basically regurgitated the media attacks on Sanders as a sore loser who is out of touch with reality.

After Sanders won Indiana and told supporters he was not quitting, Noah suggested that his staying in the race would lead to “mayhem in Philadelphia.” He then went on to attack the Senator for offering an economic plan that had numbers that didn’t add up.  He then threw up his hands asking why the Senator wouldn’t just quit and make the road for Hillary Clinton easier.