There's a new battle raging in California over history textbooks. Here's what you need to know

At issue is the way India is presented, and a struggle between Hindu nationalists and marginalized peoples 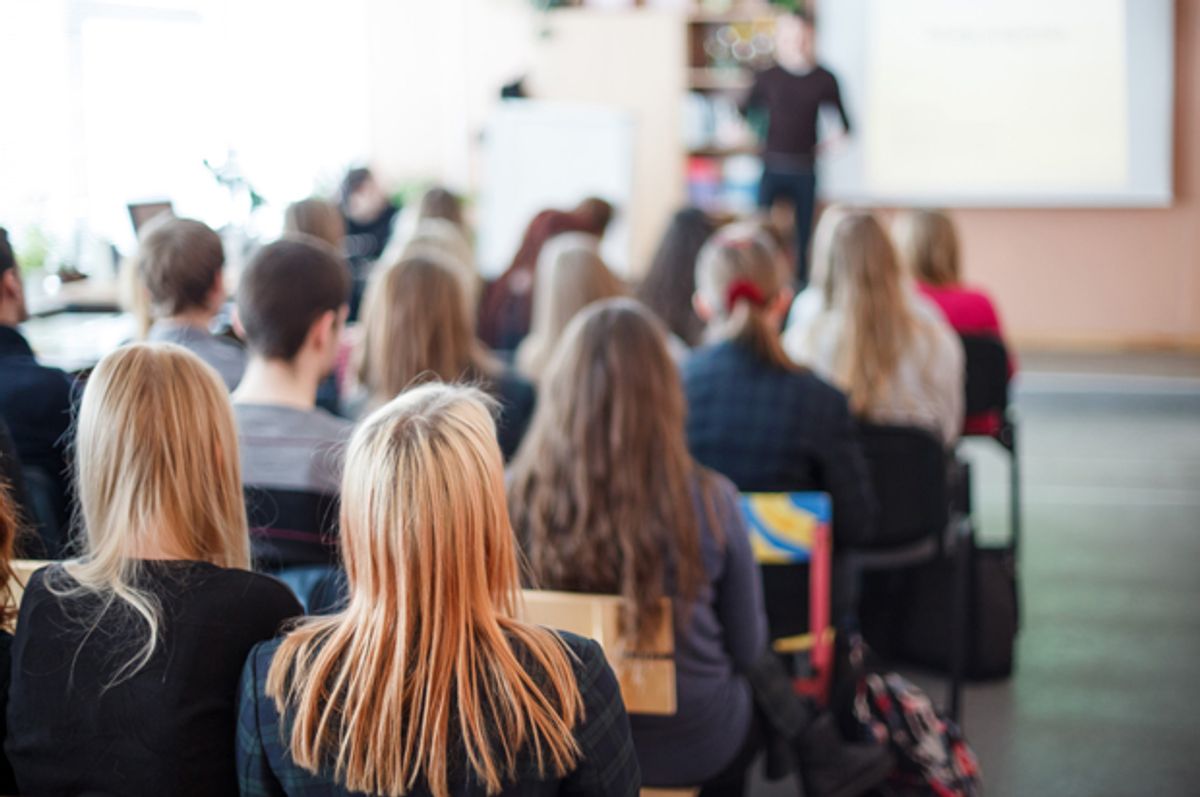 Determining the content of school curricula is amongst the most contentious education issues in the United States. A few years ago, when the U.S. Advanced Placement history requirements were reconfigured, conservatives we in a tizzy over supposedly un-American content, with fallen presidential contender Ben Carson going so far as to suggest that “most people” who complete the course would then be “ready to sign up for ISIS.” After this uproar, the course was amended to include, among other changes, a new focus on American exceptionalism.

History is, indeed, written by the victors.

In California, a debate is currently raging over how to educate 6th and 7th graders in the state about the history of South Asia. At the center of the debate is how California textbooks refer to the area that includes modern-day India, Pakistan, Bangladesh, and Nepal. Should this group of countries be called India, or should they be referred to as South Asia in order to fully to represent the plurality of cultures and nations, several of which were once one nation, but are now divided into multiple distinct nations following the end of colonial control in the region.

The debate also includes the question of how the culture of this region is represented in textbooks -- specifically in regards to the role of the caste system in Indian history and women’s roles in South Asian society.

A host of Indian American organizations have come into the mix to represent the interests of Hindu Americans -- namely the minimization of the impacts of the caste system -- preserving its preferred image of India in these textbooks, and by extension, in American society. This alliance, led by the Hindu American Foundation (HAF), also includes Hindu Education Foundation (HEF), Uberoi Foundation (UF) and the Dharma Civilization Foundation (DCF). The coalition is notable for many reasons, not the least of which is their proximity to Hindutva -- a political movement based on fundamentalist Hindu nationalism.

These conservative Hindu groups are spearheading a campaign across the U.S. to counteract the trend of  replacing the words “Hindu” or “India,” in sixth and seventh grade history textbooks in 30 places around the country with the term “South Asia.” In the process, they are perpetuating the erasure of the longstanding and ongoing horrors wrought by the caste system, patriarchy and religious intolerance in India.

This is an exercise in controlling history. The winners are, in this case, upper-caste Hindus who want a sterling, Hindu-centric depiction of their country. Samir Kalra, senior director of HAF, told The Washington Post that the coalition worried that these changes could diminish the significance of Hindus.

Understanding the contentions in the California textbook debate requires having clarity about Hinduism and it’s history and multiplicity, in particular the contemporary Hindutva, or Hindu nationalist, movement. The Hinduism of Hindutva incorporates a political agenda into it's spiritual analysis: it's proponents try to distance Hinduism from the caste system, establish regressive gender and sexuality constructs, call for an aggressive anti-Muslim nationalist politic, and tie themselves unapologetically to the project of neoliberal development in India.

Understanding this history is what can allow us to approach HAF’s campaign with more nuance. When they claim that including the complicated history of region has an adverse impact of Hindu-American children, rendering them more prone to bullying, they are advocating for the erasure of the painful experiences of Dalit, Bahjujan and Adivasi communities both in India and here in the U.S.

Thenmozhi Soundararajan, a Dalit American activist, told Salon that HAF participates on the religious advisory board for the Department of Homeland Security’s bullying task force, and through such influence, has “mainstreamed their fundamentalism.” Soundararajan’s meticulously documented article in Huffington Post tracks the consistent and willful dismissal of the perspectives of Dalit activists that have fought cast supremacy for generations.

Similarly, Valliammal Kaneeran of the Ambedkar Association of California told the Indian Express that:

“It is outrageous that the teaching of Untouchability does not include the term Dalit. Would we teach the history of slavery and use an epithet to refer black folks? Erasing Dalit erases our dignity and tradition of struggle. It is offensive and the epitome of hypocrisy for a group that is appropriating the language of minority struggles for their majoritarian agenda. Shame on the HAF and their cohorts.”

How can we begin to untangle the larger political goals and objectives of organizations like HAF that are leading this fight? Let’s look at what might be their blueprint.

A cursory look at the rise to power of the Bharatia Janata Party (BJP), the Hindu fundamentalist party currently in power in India, plainly shows that the strategy of focusing on education as a means of systemically rewriting history is not a new one. Hindutva’s political ideology calls for an exclusively Hindu nation with Dalits, Buddhists, Sikhs, Christians, and Muslims either being assimilated or expelled. A key part of this project is the construction of India as a historically Hindu nation, disenfranchising Dalits, making Sikhs and Buddhists invisible, and identifying Christians and Muslims as “foreigners.”

When the BJP first came to power in 1998, one of their first moves was to load the National Council for Education and Research Training (NCERT), the school curriculum development and review body at the national level, with ideologues who supported their vision for India. Since then, NCERT has been the site of relentless changes to the school curricula in alignment with the Hindutva agenda.

The HAF and it’s partners are following a parallel strategy. Since 2004, a web of organizations and leaders affiliated with the BJP have brought charges of anti-Hindu bias in textbooks in Virgina, California, Texas, and Florida. A group of scholars concerned about this trend have documented this history in the article "The Hindutva View of History: Rewriting Textbooks in India and the United States." Another group of scholars who study South Asia — the South Asia Faculty Group, whose members represent Hindu, Buddhist, Sikh, Muslim, Christian, and Jewish faiths —  explain that the notion of of Hinduism as a uniform, single religion with definite structures and texts is a relatively modern one.

According to it’s 214 records, the HAF spent nearly $200,000 on education-related initiatives and $200,000 on policy related initiatives. One of it’s projects has been writing and circulating the report, "Hinduism: Not Cast in Caste." The report distances Hinduism from caste hierarchy and dismisses the work of Dalit rights activists as the work of “Christian Missionaries.” Soundararajan asserts that this report is never cited by Dalit activists, but HAF and it’s allies often use it to gain entry into progressive conversations and political spaces.

Doubling down on the argument that this fight isn’t about religious fundamentalism but about discrimination and bullying, HAF’s Executive Director, Suhag Shukla recently penned a piece,“30 Years Later, Cultural Stereotypes in CA Textbooks Still Hurt,” which focuses on the harm done to Hindu children as a result of bullying and cultural stereotypes.

To counter this falsely reductive debate about erasure on the one hand and HAF’s concern about young Hindu kids being bullied on the other, the South Asian Histories for All Coalition has entered the mix.The group is an interfaith, multi-racial, inter-caste coalition of organizations and individuals from all over California, who recently explained how the HAF's version of history erases some important history. Many of the coalition’s members were involved in the 2006 battle over California’s textbooks.

The false choice between these two positions also undermines the fact that there is multiplicity within Hindu Americans -- there are progressives who vehemently disagree with the project of distancing Hinduism from the indignities and injustices of the caste system and the Islamophobia taking root in Indian politics. Leaders of the HAF like Shukla have resisted the conflation of BJP politics and their own, yet when a political opportunity presents itself, like the one before them now, they are playing from the same playbook as their nationalist counterparts, without manful engagement with the wide range of South Asian American scholars and activists that challenge their beliefs as well as their strategies.

Last month, a group of Hindu students spoke to the California commission tasked with determining what goes in its textbooks, accusing them of “Hinduphobia” and robbing them of selfhood. Surely, it is tough to be a young person of color in the U.S. and the bullying of young South Asian kids is common, as so many of us can personally testify. But to untether that bullying from the history of Islamophobia and racism, and instead attempt to solve the problem by erasing the violent histories of an entire region, is certainly not the answer.

Perhaps, it’s the wrong solution to the wrong problem. As the debate about what is taught in the the AP U.S. History course shows us, if the violent histories of Europe and South America were also treated with similar rigor, there would be less targeting of students of color, and immigrants students as the only ones who come from places with troubling histories. The answer cannot be to bury our heads in the sand of willful ignorance and assert moral superiority. This goes for Indian Americans, and all other Americans as well.