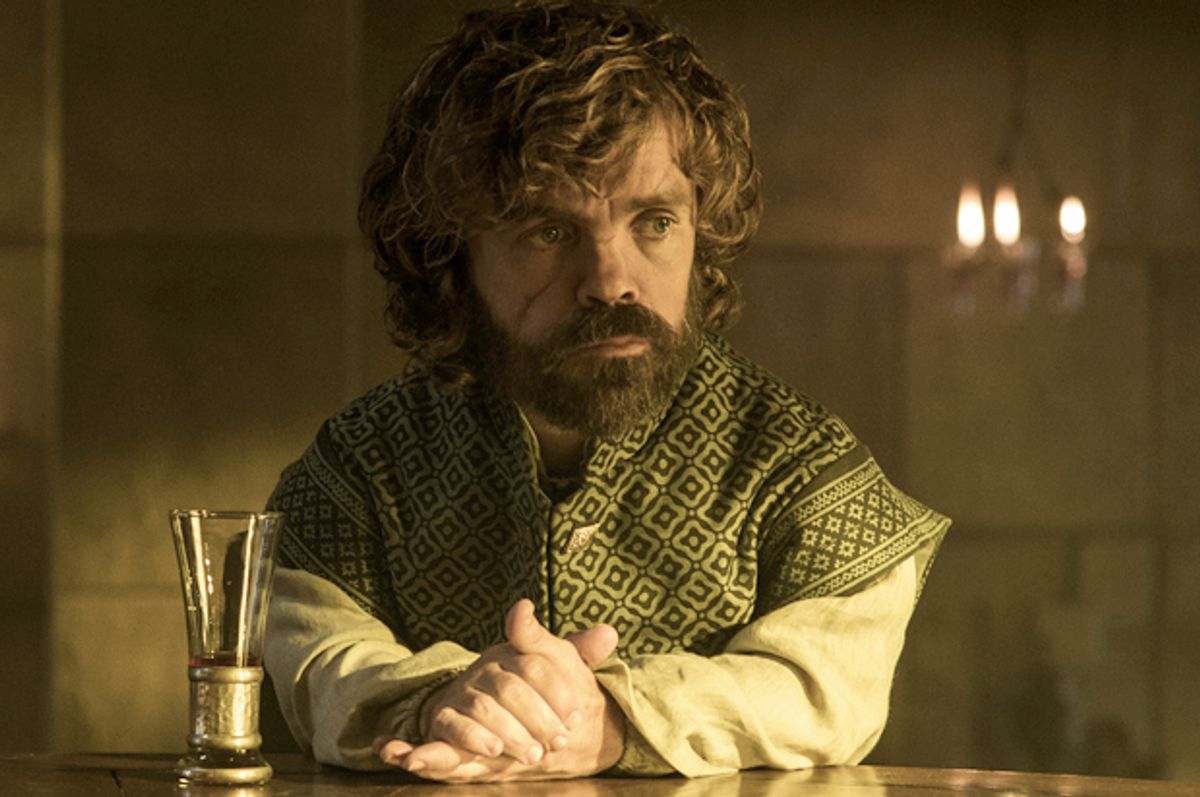 On last night’s “Game Of Thrones,” Tyrion Lannister made a controversial offer to the slavers of Yunkai and Astapor, the pissed-off former despots whose slaves and livelihoods were snatched from them by Daenerys Targaryen. Dany’s liberating forces demanded immediate compliance, but what followed was unrest and conspiracy. Tyrion—in control of Meereen because Dany flew off on her dragon and then got herself kidnapped—is left to try to make peace.

His strategy is to offer the slavers a compromise: Instead of freeing their slaves immediately, he will offer them a seven-year grace period to comply with Dany’s mandate. The buffer, he argues, should give them time to adopt a new economic strategy. And to sweeten the deal, he rings a bell to produce three non-slave female prostitutes, who drape themselves over the slavers with the practiced ease of women who were sold into sex slavery and know what their lecherous masters expect. The women have no names, of course.

The scene leaves a bad taste in one’s mouth, because it’s supposed to; Tyrion is proposing extending unimaginable, violent oppression for the slaves of Astapor and Yunkai for seven more years, and in the meantime, showering the brutal slavers with earthly delights. It is appalling, and the onlookers are appalled. Grey Worm and Missandei, in particular, as former slaves themselves who pledged their loyalty to a now-absent liberating queen, are shaken. It is easy enough, in a boardroom, to decide on seven years as a compromise. It is much harder to endure seven years of slavery. Tyrion tries to assure Missandei that he knows “the horrors of that institution.” She levels a dispassionate, unimpressed gaze at him. “How many days were you a slave?”

Tyrion and Dany have long been presented in opposition to each other in “Game Of Thrones” for embodying two oppositional forms of leadership. Dany is the ruler that inspires people with her dragons and force of personality; Tyrion is the ruler that cuts through politics by being the smartest policymaker in the room, much to everyone else’s irritation. Dany deals exclusively in ideals and absolutes; Tyrion can’t afford to.

In “Book Of The Stranger,” the same dichotomy plays out, as Dany conquers another nation with fire and blood and Tyrion brokers backroom deals for what he believes to be the common good. And smartly, both approaches are depicted with their flaws. As I wrote this morning, Dany’s conquest leaves its own sour aftertaste. To quote some of the relevant points:

Dany already had three saviors in attendance before she pulled out her party trick [… ] and her masses of new subjects—all people of color—seem stunned into submission, more than praising her name. […] The bloodthirsty, casual way that Dany overthrew Vaes Dothrak is actually a rather unsettling harbinger of her particular brand of charismatic tyranny. Instead of being framed as a savior, she could just as easily be seen as a despot. Back in season three, in Slavers’ Bay, Dany was liberating the enslaved, who cried out her name with joy when she broke their chains. In the heart of the Dothraki sea of grass, no one is calling her a savior. They’re afraid. Dany hasn’t liberated them, she’s conquered them. She decided to burn everyone to death mostly because she wanted to; Dany, flush with six seasons of power and entitlement, is now just doing whatever she wants.

Kingmaking and policymaking are not pretty. Dany and Tyrion have known that for a while, in their own ways. For me, the most interesting perspectives in “Book Of The Stranger” weren’t Tyrion’s expressions of rational self-interest or Dany burning down most of Vaes Dothrak; they were instead the perspectives of Missandei and Grey Worm, two people who are both definitively subjects under far more powerful leaders. Both are struggling to maintain their composure as their ideals seem to be constantly unraveling; slavery is a very real concern for both of them, and Dany freeing them from slavery made them both single-issue voters, if you will, on the topic of being treated as human beings. To shift from black-and-white ethics to political shades of gray is a major leap; and unlike Dany and Tyrion, they do not have the safety nets of either three fire-breathing dragons or massive vaults of gold to return to if this Meereen experiment fails. This is their home and their lives, and they cannot so simply dissociate their emotions from what happens to them. Tyrion might know how to handle a backroom so as to save the most lives, but it’s Missandei and Grey Worm whose lives he’s discussing, not his own.

“The Book Of The Stranger” offers a look at privilege, both in terms of rulers and their subjects and—more saliently to our world—that of white powerbrokers with little skin in the game as compared to the people of color who are daily fighting in the trenches. It is no accident that former slaves Missandei and Grey Worm are people of color, while Dany and Tyrion, their well-meaning and oft-blundering white “allies.” Tyrion still doesn’t know how to speak Valyrian, and he has the temerity to assume that his brief experience of slavery, where he was a prized acquisition of known Good Guy Jorah Mormont, is even remotely similar to the terrorization and brutality endured by Missandei and Grey Worm and the rest of the slaves in this part of the world.

Tyrion has always identified with the Stranger, that god of the seven that is depicted as a mysterious, terrifying figure; what he has not realized, perhaps until “Book Of The Stranger,” is how lofty and privileged that role is. For what it’s worth, I’m interested in the complicated interplay between Strangers and our own world’s semiotic Other, too, which might be a subtext the show is consciously playing with. But at the very least, it is fascinating to see “Game Of Thrones” introduce a plotline that addresses and understands white privilege, and digs into the complicated identity politics of both types or rulers, whether that is Dany as savior or Tyrion as fixer. The takeaway from last night’s episode is that pragmatism, no matter how funny or logical it sounds when coming out of Tyrion’s wine-swilling mouth, is itself a privilege; not being emotionally invested in systematic oppression might be the best way to broker peace, but it is a dispassionate role that very few people can claim the right to.