Bubba's toxic economic legacy: When Hillary brags about the first Clinton presidency legacy, she doesn't want you to remember this

Hillary Clinton recently stated that her husband would be a key player on economic policy. That's not good news 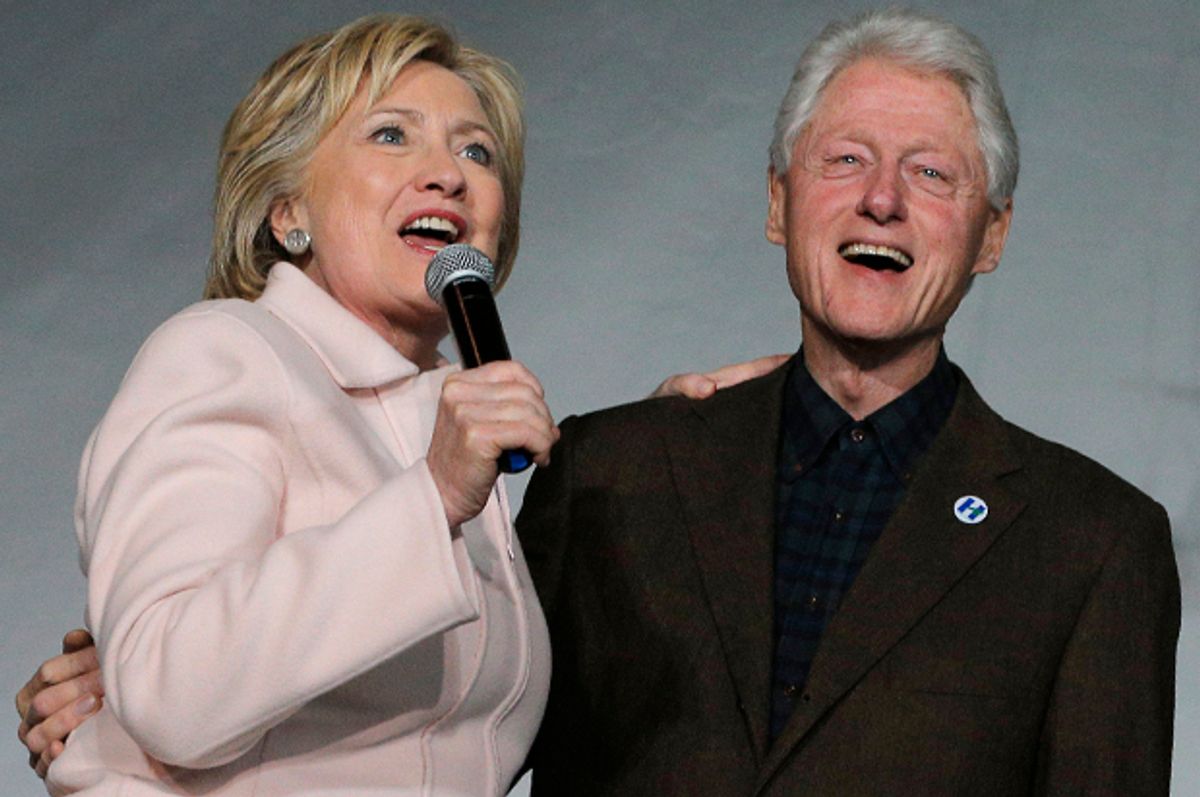 Over the past several months, Hillary Clinton has been somewhat hesitant to bring up her husband’s legacy as president, which, for many progressives, is a vexing reminder of how the Democratic Party embraced neoliberal policies towards the end of the 20th century, under the leadership of the the triangulating Bill Clinton. Faced with the insurgent campaign of Sen. Bernie Sanders, Clinton has tried to hype her progressive bona fides, which has meant avoiding some of Bill’s more despicable policies — from the 1994 crime bill and expansion of the war on drugs, to welfare reform and the Defense of Marriage Act. Almost two decades removed from the Clinton administration, there is a lot to find distasteful, and Hillary clearly wants to avoid discussing the worst of her husband’s presidency (which, like or not, she played a major role in).

There has been one area, however, where Hillary has been quick to conjure up her husbands legacy: the economy. On Sunday, she even said that she would put Bill in charge of “revitalizing the economy” as president.

This isn’t the first time Hillary has bragged about Bill’s booming economy, and her desire to emulate it. Take this statement from January, for example:

“I’m going to have the very best advisers that I can possibly have, and when it comes to the economy and what was accomplished under my husband’s leadership in the ’90s—especially when it came to raising incomes for everybody and lifting more people out of poverty than at any time in recent history— you bet.”

Clinton has also reminded us frequently that “the economy does better when you have a Democrat in the White House,” which is an inconvenient truth for Republicans who like to go on and on about how Democrats are job-killing commies. (The GDP and job-growth have increased faster under Democratic presidents since the post-War era.)

So then, it’s not surprising to see Clinton expressing nostalgia for Bill’s economy. For many Americans, the '90s were indeed a time of economic triumph. Unemployment and inflation were down, the massive deficits that the Reagan-era had left behind were reversed, while the stock market grew rapidly. During this era, many economists and pundits opined that the United States and the world had entered a new epoch, where established economic truths were no longer applicable to the “new economy.” The fall of communism and the invention of the internet and new computer technologies had changed everything, and a decade of what Alan Greenspan would later call “irrational exuberance” commenced. (Some were arrogant enough to even declare “the end of history.”)

The dot-com bubble is the best example of this irrational exuberance. Internet startups that had no source of revenue or any kind of sensible business plan exploded. As in the past, investors collectively lost their minds. At the start of the new millennium, reality crashed the party; and, in the 2001-01 crash, trillions of dollars in investor capital evaporated. Financial innovations also played a major role in the decade’s economic boom, though they would eventually lead to the 2007-08 financial crisis. Modern securitization flourished, and various derivative innovations — mortgage backed securities, credit default swaps, collateralized debt obligations — created an even bigger and more unstable speculative (and fraudulent) bubble than the dot-coms.

So what does Bill Clinton have to do with all of this? First of all, it should be noted that he was lucky to be president during this period (just as Obama was unlucky to inherit the worse economic crisis in 80 years). The economy was inevitably going to boom with novel technologies and the fall of global communism — which had opened up new markets around the world.

But even more importantly, it should be recognized that the economic policies of Clinton not only exacerbated the bubbles (and made the later crashes worse), but undermined the longterm economic interests of the working and middle classes.

It was, after all, the Clinton administration that oversaw widespread financial deregulation, repealing Glass-Steagall, which contributed to the rise of too-big-to-fail financial institutions, and signing the Commodity Futures Modernization Act into law, which ensured that the derivatives market that eventually led to the financial crisis was not regulated. The first financial institutions to benefit from Glass-Steagall’s repeal were Citicorp and Travelers Group, two companies that merged to form Citigroup, where Clinton’s Treasury Secretary, Robert Rubin — who pushed for the legislation — would go on to receive $126 million in compensation (after the bank was bailed out by the federal government). Clinton also signed legislation (Riegle-Neal) that removed restrictions on interstate banking, leading to a rapid decline in local commercial banks.

Beyond financial deregulation, Clinton passed the North American Free Trade Agreement (NAFTA), which undermined manufacturing jobs and unions, while benefiting the biggest corporations who could shift production to Mexico; he signed the aforementioned welfare reform, which led to a system rife with racial bias and left more in deep poverty; and he reappointed Alan Greenspan as the Chairman of the Federal Reserve.

(To understand how awful Greenspan was, I recommend Matt Taibbi’s book "Griftopia.")

To sum it all up, Bill Clinton’s economic legacy should repel all progressives who believe in economic justice and fairness. Bubba did a lot as president to advance the interests of big banks, and precious little to help the working class and poor in the long run. Which begs the question: Who is Hillary trying to appeal to with Bill’s neoliberal economic legacy?