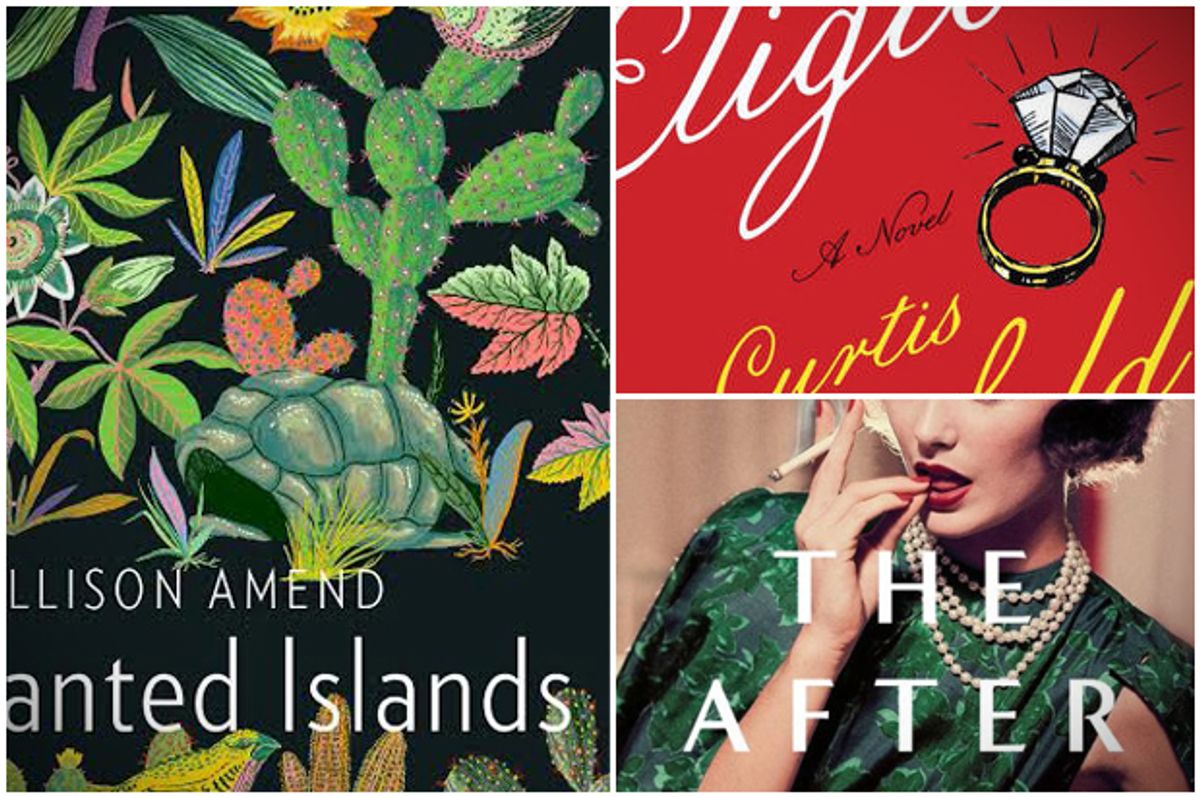 For May, I posed a series of questions — with, as always, a few verbal restrictions — to five authors with new books: Allison Amend ("Enchanted Islands"), Anton DiSclafani ("The After Party"), Geoff Dyer ("White Sands"), Curtis Sittenfeld ("Eligible") and Paula Whyman ("You May See a Stranger").

AMEND: Keeping secrets, the puzzle of identity, the family we make, female friendship and SPYING!

DYER: I guess travel and the search for change. Places and the things in those places that don’t change – which become more apparent in the light of transitory things that do change (aka the people there). In other words the relation of incident –or incidental – to the essential. Sometimes they’re very different, sometimes practically synonymous.

DISCLAFANI: The life of an obsessive friendship. Houston in its 1950s heyday, watered by oil and populated by spectacular characters. A secret.

WHYMAN: It’s about lust and anxiety and elusive contentment, about dealing with sexuality and class and racial tensions as a teen and onward into middle age. It’s about living in D.C. when you’re not in politics. It’s about difficult siblings, difficult marriage and kids; about how we struggle to change and adapt, yet we’re never sure that we’re living the best way we can. It’s a book about how we become ourselves.

AMEND: My frenemy, solitariness (not to be confused with loneliness), searing equatorial heat, aging, my mother’s book club.

DISCLAFANI: Seeing Texas from the backseat of my parents’ rental car, as we visited relatives in both the glamorous parts (Houston) and the less glamorous parts (Hereford). My grandfather, who was a waiter at the Cork Club and stole Glenn McCarthy’s solid-gold lighter after McCarthy didn’t leave a tip. The way my father still tells people he’s from Texas even though he hasn’t lived there in thirty-five years.

WHYMAN: Terrorism, and the way fear has changed everything. A question asked in a psychological study: Can one’s personality change over time? Bad ’80s music. Marion Barry and his Murder Capital. Driving in D.C.’s rush-hour traffic. The awful roommate, and the apartments where I lived in my twenties. ABC After-School Specials. My brother. Every place I’ve ever felt like an outsider. All the birds. The wars in Iraq and Afghanistan. Talking to high school students in Harlem. Talking to strangers on Amtrak. The sweating, shirtless boy mowing the lawn; the smell of gasoline and smashed-cut grass.

DISCLAFANI: Faintly then hugely pregnant. Writing about characters who drank like it was their job when I could not. Thinking lustily about various 1950s cocktails. Revising with infant in next room.

DYER: The usual. Continuing deterioration of tennis game, for example, plus succumbing to and recovering from injuries. Ever-increasing irritability. Plus, unusually, I moved to California – which strangely did nothing to ameliorate the last mentioned category of “the usual.”

AMEND: “I bought this book because there was a dog on the cover, but there’s no dog in the book!” Also, “There’s too much about the characters. They just talk to each other for the whole book.”

DYER: “Formless” or “Unstructured.” Structure’s actually a strong point. So the way some people thought Jeff in Venice, Death in Varanasi was two half books masquerading as one complete one was irritating in the extreme.

WHYMAN: Conservation biologist, maybe with a special interest in lizards. I once wrote a novel chapter from the point-of-view of an anole.

AMEND: Woman of leisure. I think I’d be excellent at it. Also, I’d like to be in charge of rail travel in this country. I have a lot of ideas for Amtrak.

SITTENFELD: I'd be either Kelly Clarkson or a social worker.

DYER: The life of any kind of sportsman.

DISCLAFANI: Medicine. I like the idea of trotting around a hospital, ever-alert. And what you did would automatically mean something.

SITTENFELD: In graduate school, I learned incredibly important lessons about structure from my advisor, Ethan Canin: how to think of the work as a whole, how to consider which scenes go where and what information should be revealed when. I think I'm decent at keeping a novel chugging along, making the reader want to know what happens next, which tends to hinge on structure, even as structure should essentially be invisible. As for what I'd like to be better at, I'm aware that my prose is more often workmanlike than actively lovely. I'm not a huge fan of gratuitously, self-consciously exquisite sentences, but I could no doubt be a bit more elegant overall.

WHYMAN: I think I’m better at dialogue, wry humor, and sex. I wouldn’t mind if the the plot thing came more easily.

DYER: Good at structure and form – coming up with new structures, new forms. Not good at character or plot – don’t care though.

DISCLAFANI: I think voice and setting are my strong suits. I’d like to get better at plot.

AMEND: I find dialogue easy to write. Plawt, not so much. I can’t even spell it. The spying section of Enchanted Islands brought me to tears several times.

DYER: I reject the question because I would never think anyone should give a toss about anything I say about anything. My whole writing life has been built on the assumption that no one was listening. Hello?... Hello…? Is there anybody out there…?

DISCLAFANI: I don’t think about it. I try to approach writing as a job: I write novels. People read them, and are hopefully moved or entertained or both.

SITTENFELD: Ha! I ask myself this very question every day. But in a way, operating on the assumption that you don't matter that much is liberating. I can be criticized or ignored for whatever I write, so I might as well write what I want to.

WHYMAN: I wrote the kind of book that I would enjoy reading, and I’m hoping there might be a few others out there with similar reading proclivities. Also, I have children, so when I talk, I already assume no one is actually listening.

AMEND: I was dipped in a font of Arrogance by my father at birth. Only my heel where he held me is vulnerable to Doubt.