"I hope for Cthulhu or the sweet meteor of death": Chris Hayes examines the fear driving the #NeverTrump search for a third party candidate

A top GOP consultant outlines his desperate mission: "Save the conservative movement from Donald Trump" 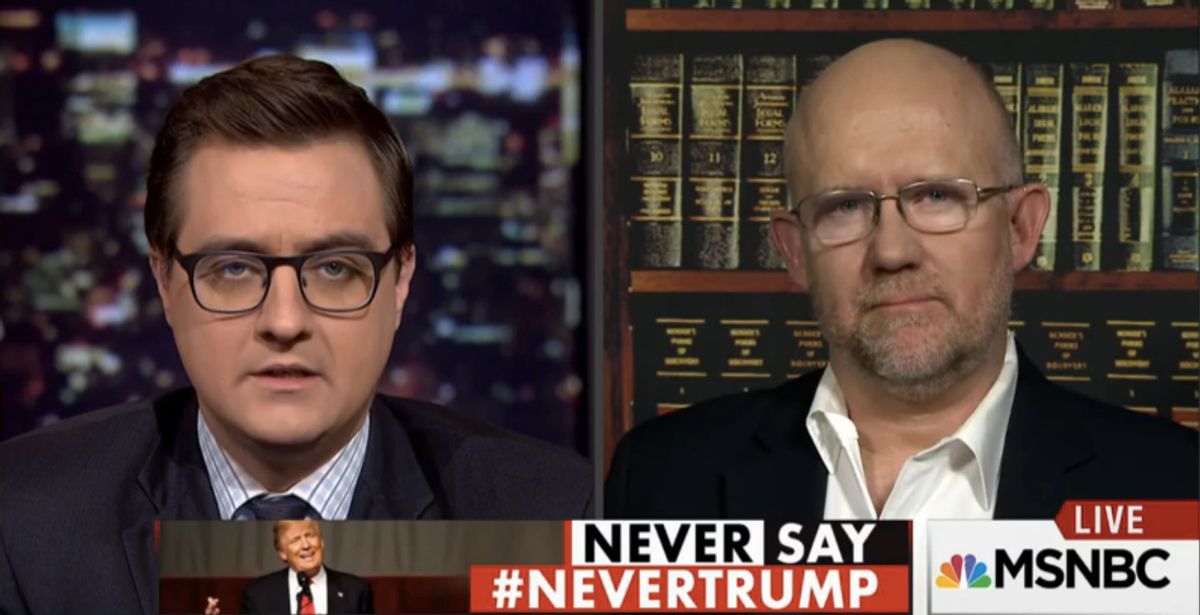 The #NeverTrump faction of the Republican Party has been determined, albeit rather lazy, in their concerted effort to prevent Donald Trump from becoming their presidential nominee, but now that the controversial political novice has all but clinched the nomination, their last-ditch effort to derail his shot at the White House has kicked into overdrive with a frantic and desperate search for any viable third party alternative -- even Mark Cuban.

Prominent #NeverTrump third party candidate proponent Bill Kristol has clearly grown frustrated with reports that any third party effort will essentially be futile, blowing up at CNN's Alysin Camerota on Tuesday morning when she dared question the plausibility of finding an actual alternative to Trump.

"My job is to be a reality check, not a cheerleader for, you know, your effort," Camerota shot back at the Weekly Standard editor after he snappily remarked that the media has improperly covered the potential for a third-party candidate in an effort to gin up ratings for a Trump vs. Clinton general election showdown.

Do I think the country deserves better? Yes. If you just want to say people so far said, no, can’t happen, great, you guys would love a Trump/Clinton race. Fantastic news every day. Two unattractive candidates fighting stupidly about their personal lives, fighting with the “New York Times.”

On his MSNBC show Monday evening, host Chris Hayes attempted to investigate whether a desperate #NeverTrump brigade that has floated such ridiculous third-party candidates as Dallas Mavericks owner Mark Cuban is even attempting to actually win.

"It is an attempt save the Republican Party from itself and an attempt to save the conservative movement from Donald Trump," GOP political consultant Rick Wilson told Hayes on the Monday edition of "All In."

Wilson cited the majorities of Republican primary voters that voted against Trump in a crowded field as evidence that the a third party candidate could "show Republicans they have a place to go other than Donald Trump."

Trump is an existential threat to the conservative movement. "If he wins," Wilson argued, Trump is "the bigger threat, actually, because he is a statist and an authoritarian. And he is a guy who will take all the things you hated about Barack Obama, if you are a conservative, his willfullness, his impulsiveness, his desire to use all the powers of the executive and ignore the judicial and legislative branches, and he'll just do that on the right."