Megyn Kelly, vulnerable and terrifying: Why Donald Trump should be scared of tonight's big interview

The Fox News anchor opens up to Stephen Colbert, showing why she's the perfect media adversary for Trump 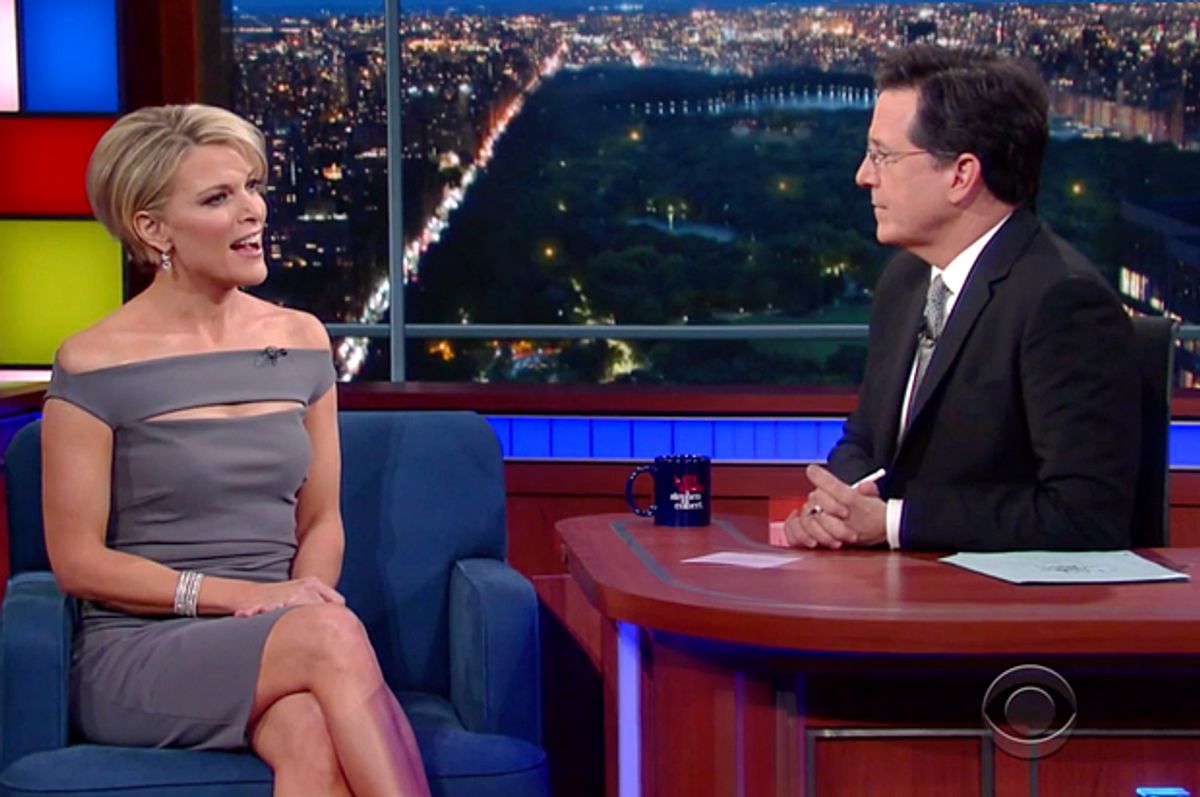 Megyn Kelly on "The Late Show with Stephen Colbert" (CBS)
--

There is a sense, of course, in which watching a Fox News anchor and a former liberal satirist discuss journalistic integrity is a bit of a gas. Restraint? Responsibility? The role of the journalist, or critic, as mediator between those in power and those without? Fox News traffics in lies and outrage, so much so that Stephen Colbert, when he was on Comedy Central, made comedy out of parodying their flag-waving, hand-wringing, Obama-hating rhetoric.

But 2016—the era of Donald Trump’s takeover of the Republican party—makes for strange bedfellows. Stephen Colbert is no longer a liberal warrior; he’s the host in David Letterman’s former spot on CBS. And though Megyn Kelly isn’t a feminist, she’s become, by virtue of her gender and career, the perfect counterweight to Trump’s myriad contempts and contradictions—both his subtle and unsubtle misogyny and his casual relationship with the truth. Trump declared a feud with her after the first GOP debate in August, and over the past nine months it has waxed and waned in the public eye. There was a Vanity Fair cover and a tiff with Fox News; there were phone calls by Kelly’s boss, Roger Ailes, and reconciliatory appearances later in the election cycle.

Tonight, Trump’s people, Fox News’ people, and Kelly herself is hoping that this narrative of discord can be ended; in a primetime special on not Fox News, but broadcast giant Fox itself. It is a major moment for the narrative future of the Republican party—a testing ground to see if “anti-establishment” Trump can play nice with the GOP’s major institutions of influence.

And as Kelly said to Colbert last night, it is also an opportunity for her to end “the year of personal insults” that has characterized Trump supporters’ reactions to her work. “It hasn’t been all bad,” she hastened to add, but sitting opposite Colbert, it was hard not to notice how shaken she seemed by what she has been going through. Kelly is an excellent television personality in part because her conviction and integrity, even when you don’t agree with her, radiate through the screen. And on “The Late Show,” what she was projecting was poised and dignified pain.

She started talking to Colbert with a little anecdote about how paparazzi are now following her and her family around. The point of it was that cameras following her around were not going to find anything, because they just go to boring places like Petco. But Kelly was so obviously furious, underneath the attempt to make light of the situation she is now in, that the audience, and Colbert, struggled to laugh. It wasn’t a bad joke; it was just the type of joke that is so revealing it’s hard to go along with it.

It was an unexpected insight into her experience. Kelly went on after actors Jason Sudeikis and Michael Weatherly, and often, 45 minutes into a talk show, whatever’s happening on-screen is pretty forgettable. But Colbert is especially brilliant at finding common ground with people—witness the cordial tone of his latest meeting with Bill O’Reilly—and Kelly, who is normally on the other side of the host’s desk, opened up about the past year.

The specific problem has been that Trump supporters have gone after her, following their candidate’s lead—and in addition questioning her integrity and talent and marginalizing her for her gender, Trump has gone on to suggest that Kelly is only famous because of his antagonism towards her. It’s this last jab that really struck a nerve. It would be a snide remark directed towards anyone, but for a conservative host so steeped in the bootstraps mythos of Republican patriotism, impugning Kelly’s hard work is a profound attack on her character.

And of course, Kelly has worked very hard—as she told Colbert, her dad died when she was just 15, and she put herself through law school, paying off her debt before turning to journalism. It is absurd to ask her to defend herself for the simple act of being herself and doing her job—absurd, and tautological—but this is the position Trump has put her in, and the rest of us, too.

Kelly has responded to this with the kind of steely resolve that would make Claire Underwood proud. “My goal in this past year has been to conduct myself with dignity and like a professional,” she said to Colbert. The mere existence of this special—just days after the New York Times exposé on Trump’s history of misogyny became the most-read Times story of the year—is an expression of that character. But so is her ability to be present and open opposite a former political adversary. Kelly is a unique package: conservative (and white) enough for the GOP to invest in, beautiful enough for television, smart enough to ask hard questions, and—for a party that loves dismantling women’s rights—unapologetically female. But what really makes her the perfect adversary for Trump is not just that she is the poster child for conservative female success; she’s also emotionally present. One gets the impression that she is listening and processing, even on live television. I wonder if that’s why Trump is so terrified of her.