"Move. Or you will be moved": How "Captain America: Civil War" raised the bar for all superhero movies 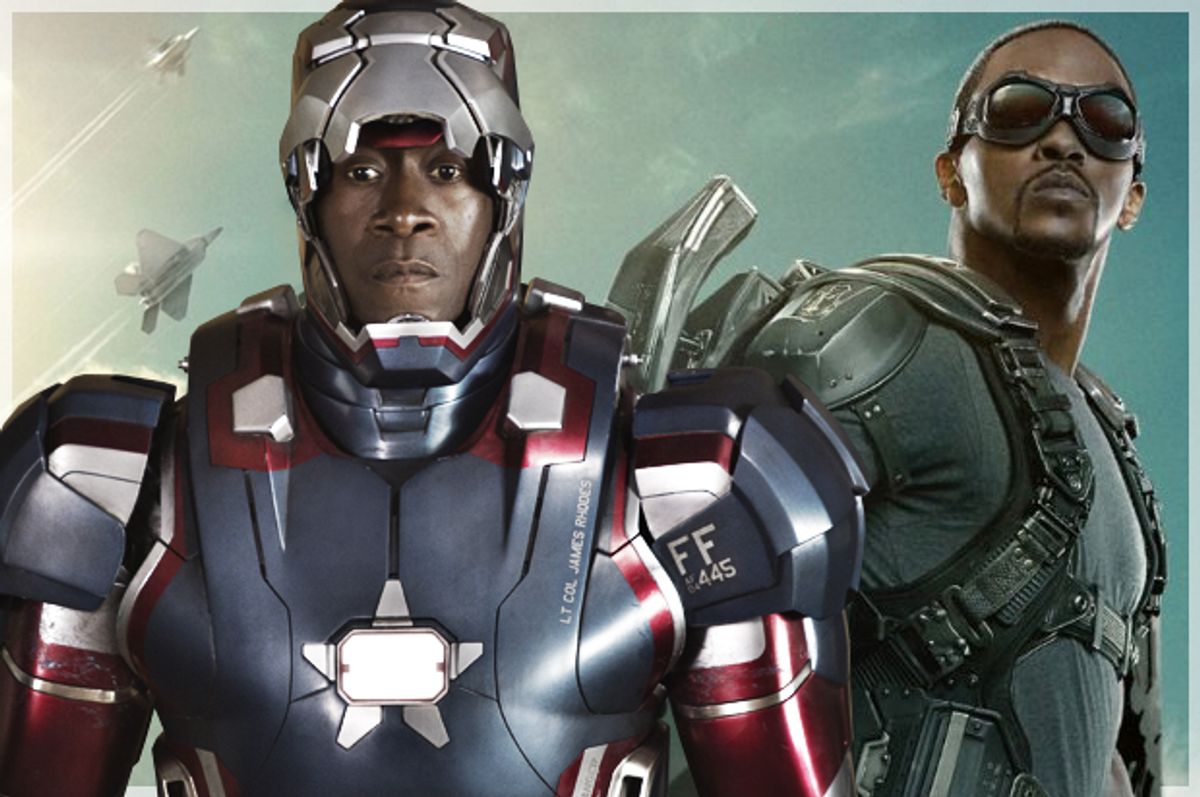 Marvel’s cinematic universe has been taking baby steps toward courting a more diverse audience for years, reaching all the way back to “Iron Man,” when Samuel L. Jackson appeared as Nick Fury, a character who is white in the main Marvel comic continuity. His appearance also announced the birth of The Marvel Cinematic Universe (MCU). But the newest MCU film, “Captain America: Civil War,” hits a high-water mark in big screen superhero diversity, and represents a big step forward for Marvel’s attempts to reach black movie audiences, in several ways.

The biggest is “Civil War”’s introduction of the Black Panther, played by Chadwick Boseman. His appearance is arguably the first black Marvel character whose role pass the DuVernay Test, a metric named for acclaimed “Selma” director Ava DuVernay and first proposed by New York Times critic Manohla Dargis, which states that African American and other minority characters need to “have fully realized lives rather than serve as scenery in white stories.”

The movie also nearly passes the Shukla Test, which calls for two minority characters to talk to each other about something other than race for more than five minutes. These "tests," like the Bechdel test for women before them, exist because the conditions for which they test are not a given in films, which often present the white male perspective as the default.

There are several moments in the film that read specifically as shout-outs to black fans, with political overtones, too. All of these elements combined illustrate a seminal moment in Marvel’s real and ongoing attempt to reach out to diverse audiences.

Fans have been calling for the Black Panther pretty much since we realized that a Marvel Cinematic Universe was going to work. It took six years of Marvel movies for Marvel to make up their minds and announce his film, and audiences are still going to have to wait another year and a half to see it. But anticipation is growing, as every announcement about the film seems to please fans immensely; from the choice of “Creed” director Ryan Coogler to helm to its star-power casting, including “Creed” and “Fantastic Four” star Michael B. Jordan and Academy Award-winning actress Lupita N’yongo. (Marvel has recently claimed that as much as 90 percent of the cast will be people of color.)

Black Panther’s onscreen introduction in “Civil War” is fuel to that fire. Marvel films often introduce new characters—or at least tease their arrivals—but Black Panther is arguably the strongest intro that the MCU has ever given a character, and fans, especially those of color, are loving it. Joelle Monique of Blackgirlnerds.com calls “Civil War” “Your new favorite Marvel Movie,” and while listing its qualities, writes, “The greatest gift is undoubtedly seeing Black Panther played  by Chadwick Boseman.” Dennis R.Upkins of the Nerds of Color was a little harder on the film, but no less wowed by T’Challa, giving the film a “B for Black Panther, the film’s saving grace.”

The Black Panther is a presence throughout “Civil War,” appearing in all but one of the action sequences. Even more is exciting is the fact T’Challa, aka the Black Panther, has an entire character arc in the film. At the beginning of the film, he enjoys an idyllic moment with his father, King T’Chaka, just before T’Chaka addresses the United Nations at historic peace accords. When T’Chaka dies in a terrorist bombing, T’Challa swears revenge on Cap’s old friend Bucky Barnes, who is supposedly responsible for the bombing. (Spoiler: Bucky isn’t the actual terrorist; he’s been framed.) T’Challa realizes the truth, and in the process sees how revenge turns Iron Man and Captain America against each other. He catches the real culprit, but decides not to kill him, showing his growth beyond vengeance. He’s by no means the star of the film—that honor goes to Iron Man and Captain America—but the character has a fully realized arc.

The creative team also gets Black Panther right. He’s a king, a warrior, and an intellectual. And he also has to be cool and tough, because that’s a chief concern for superheroes. Did I mention that he never loses a fight? His country has never bowed to colonial powers. And in addition to being a strong presence in and of himself, Boseman’s T’Challa is surrounded by dynamic characters from Wakanda. He could have been a black face in a sea of ScarJo’s and Chris’s, but instead he rolls with his own diplomatic crew. This includes his security chief (Florence Kasumba), who oozes coolness—when she finds The Black Widow (Scarlett Johansson) standing in her way, she firmly states, “Move. Or you will be moved.”

It’s a cool moment in and of itself, but it’s also another example of density that has been lacking in previous MCU films. Most of the Marvel movies have worked hard to feature black characters, including James Rhodes/War Machine, Sam Wilson/the Falcon, Nick Fury and Heimdall, but they seldom share screentime. Heimdall hangs out on the Rainbow bridge and only talks to Loki and Thor. War Machine and the Falcon have both been in films with Fury, but as the head of S.H.I.E.L.D., Fury doesn’t have time to talk to sidekicks, which is a simplistic but essentially correct view of Rhodes’ and Wilson's respective places in the “Iron Man” and “Captain America” franchises.

But at times in “Civil War,” there are three black superheroes on screen, each different in characterization, each with their own motivations. As my friend and fellow comic book fan Phillip pointed out to me after seeing the film, that’s a pretty rare phenomenon in Hollywood, let alone in superhero movies. “What ‘Civil War’ did was give you a glimpse of black characters' diversity of thought that rarely gets explored within MCU, or the country for that matter. You have Black Panther, king with his own nation, alongside two war vets with very different interpretations of [superhero] registration,” he said.

Those two vets, Sam Wilson and James Rhodes, share a moment in Avengers Tower as the heroes argue over registration, aka the Sokovia Accords, a United Nations treaty which seeks to limit and control the actions of The Avengers. Rhodes and Wilson are on different sides of the widening split, and argue about the use of force, the state’s role in using force, and personal responsibility.

This conversation isn’t five minutes long, so it doesn’t quite pass the Shukla test, but long conversations in this film are sparse in general — the characters’ arcs are made instead of brief moments crammed between punches, explosions, and exposition.

And those brief moments can matter. In the back half of the film, Wilson/The Falcon has been imprisoned, and is being pumped for information, when he quips this great line: “Are you the good cop? Well, you better get the bad cop, because you’re going to have to go Mark Fuhrman on my ass.”

It’s a funny throwaway line, showing Wilson acting cool and tough. But beyond the quick laugh, there is so much more going on here.

If you aren’t a nerd, maybe you don’t spend hours talking about what is and isn’t “canon.” Comic stories are filled with do-overs, and often a story is written out of existence because of time travel, or alternate universes. Writers create stand-alone stories like the Frank Miller classic “The Dark Knight Returns,” which exist outside of the story’s continuity and therefore aren’t part of the canon.

Multiple media and platforms confuse the issue further. A video game with certain fictional characters probably isn’t canon — unless the company that owns the franchise says it is.

And it turns out that fans care deeply about which stories are canon — about what is “real” within the confines of our fictional universe. But certainly anything that happens on screen in a Marvel movie is the primary source of that canon. So that moment with Wilson counts. It’s real.

Cross that concept with a basic understanding of the effects of institutional racism and micro-aggression. Studies of micro aggressions suggest that part of what makes them so hurtful is the fact that people of color don’t always know if a micro-aggression is “real.” Now, throw in an understanding of who Mark Furhman is. Put it together, and you get the fact that racist police brutality is now canon in the MCU. Racist police brutality exists and a superhero recognizes it and calls it out. By extension, Marvel is saying it sees one of the major problems black Americans face.

Maybe this moment wouldn’t have stood out so much without an even stronger moment early in the film, when a grieving African American mother confronts Tony Stark. Her son was in Sokovia (the scene of the climactic battle in “Avengers: Age of Ultron,” and the namesake of the abovementioned Sokovia Accords), and was killed in the crossfire. The woman throws a small tech gadget at Stark; he opens it and it’s a picture of her dead son. It’s messier semiotically than the moment with Wilson, but the strength of the image speaks for itself; it’s huge, filling the entire screen, and the message is clear: The white system of power kills black children.

She asks Stark, with tears in her eyes, “Who’s going to avenge my son?”

It’s important to note that the numbers around movies like the box office juggernaut “Star Wars: The Force Awakens” suggest that in the new Hollywood, it pays to bring women and minorities to the action franchise. Maybe this overture to black audiences is just a numbers game. It’s certainly a big advertisement for the upcoming “Black Panther” film.

But whatever the studio’s motivation, it’s exciting to see one of the biggest franchises on the planet committing to its black characters so fully. As a big kid at heart who loves comic book movies and social justice movements, it’s amazing to feel like the superheroes are siding with me and with black audiences, who are still so drastically underrepresented in Hollywood.