Angry Video Game Nerds, calm down about "Ghostbusters": It's still a comedy about ghosts and those who bust them

Sony dropped the second trailer for Paul Feig's reboot today, on the heels of one critic's boycott declaration 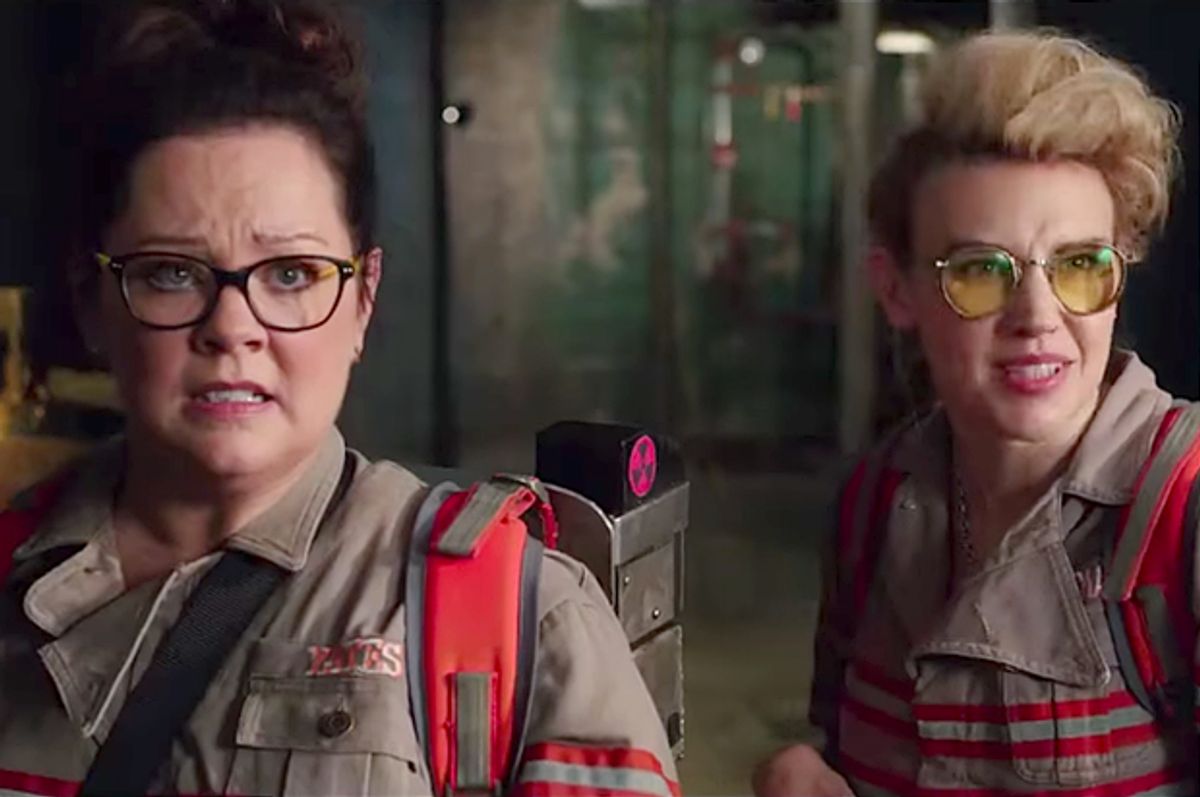 How’s this for a strange blend of irony, defiance, and cognitive dissonance? The new trailer for a much-awaited film by a very smart director drops just after an odd announcement by a reviewer that he would not review the film. And while the reviewed – James Rolfe, known as Angry Video Game Nerd – seems to be trying to deflect the attention away from a movie he doesn’t approve of, the storm is sets off seems likely to bring even more eyeballs to the trailer and eventual film. Got that?

Rolfe, on Cinemassacre, announced that his disappointment with the trailer and the whole idea of a “Ghostbusters” remake, would lead to his refusal to watch it. Here he is:

So instead of doing what everybody else is gonna do -- go see the movie, and then talk about how bad it is -- I’m gonna do something different, something unheard of – I’m not gonna see it! Wow – what a novel concept, right! If you already know you’re going to hate it, why give them your money?

Then this morning, Sony released the second trailer. And while a lot of us will miss Bill Murray’s deadpan cool of the original, this looks quite funny. “It will haunt you every night. Whatever it is, no one should have to encounter that kind of evil,” Michael McDonald intones darkly. “Except you girls. I think you can handle it.” That quick switch from foreboding to humor works nicely, and given that director Paul Feig made “Freaks and Geeks,” there’s a lot of reason to think this could be hilarious.

Chris Hemsworth – who plays the assistant to the four female ghostbusters – is funny, and Kristen Wiig is coolly winning as always. A little Melissa McCarthy goes a long way for me, and there is too much CGI. But this looks like a tense, clever film, one with a lot of physical comedy and a pretty broad appeal. So what’s not to like?

Well, the first trailer has become YouTube’s most-hated, and the new one may be headed there soon. For some people on the left, Leslie Jones’s character – who is not a scientist, like the three white ghostbusters – plays a black stereotype. To some bros, the whole idea of an all-female “Ghostbusters” is too politically correct.

Which brings us to refusal by Cinemassacre’s Rolfe. He doesn’t get into the gender issue as much as some other factors – that bringing back the original cast would have been better, that the fact that it’s just called “Ghostbusters” will lead to confusion with the original, and that it’s a shame that a third “Ghostbusters” never happened.

The thing is, he’s probably right about most of this. And despite some over-the-top fulminating – “This isn’t just any movie, this is Ghostbusters!”, and insisting that Harold Ramis was lucky “he didn’t live to see this shit” – a lot of what Rolfe says is intelligent. (His argument that the new film has no reference to the original is a bit off, though, since Slimer and the Stay Puft Marshmallow Man are back, the music is based on the original, the costumes clearly riff on the 1984 movie, and so on.) Rolfe never goes on the anti-woman rant that a number of commentators are likely to unleash.

But his refusal to see the eventual film is pretty strange, especially since thousands of people respect his obsessive and informed reviews. If he doesn’t like it, why not watch the movie and tell everyone? The fact is, only a few minutes of the film has shown up publicly – to dismiss it based on that is as foolish as insisting it will be great because it has four women in the lead.