In one spectacular fiasco of a sit-down, Kelly squanders all of the journalistic goodwill she had built up 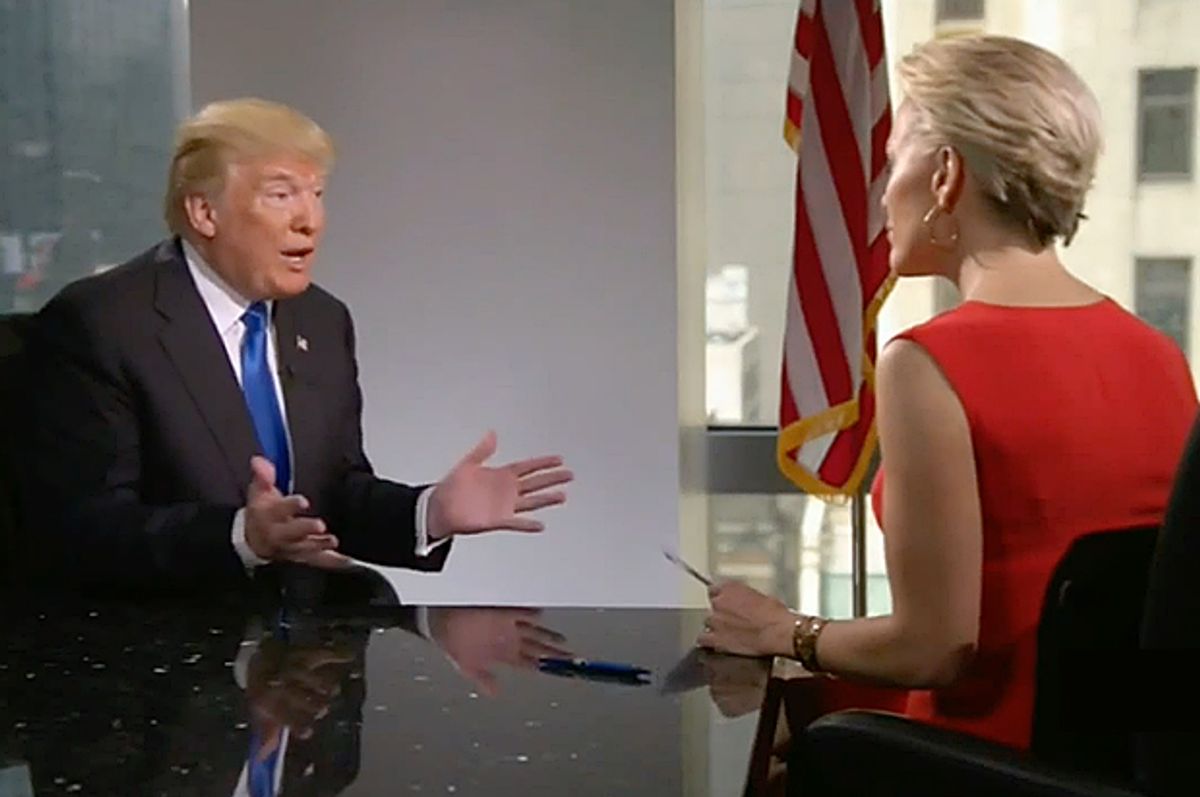 “Megyn Kelly Presents” was a colossal disappointment. I had high hopes for the primetime special, in which Fox News anchor Megyn Kelly sat down with GOP frontrunner Donald Trump in a kind of truce after a nine-month long “feud.” To be exact, the “problem” was that Kelly asked Trump a question about misogyny during the first debate, and Trump responded by pouting that she’d been mean. Over the following months, Trump’s attacks escalated and waned, according to his mood. Last month, Kelly apparently decided she’d had enough, and personally reached out to Trump for a one-on-one interview to clear the air.

As I wrote yesterday, when Kelly was on “The Late Show With Stephen Colbert” on Monday night, she expressed a lot of pent-up rage and frustration about how Trump’s targeting of her had mangled her life. I thought the interview might be a signal that Kelly was tired of letting Trump bully her; by facing him, she was forcing him to direct his anger at her, instead of just insinuating things about her character on social media and in other interviews.

I was rather mistaken. “Megyn Kelly Presents” was not a journalistic effort; it was a public-relations stunt. Kelly's line of questioning minimized Trump’s serious ethical shortfalls into personality quirks. She radiates sunny, positive enthusiasm, a carefully modulated kindergarten-teacher demeanor that only occasionally cracked. The questions sounded workshopped to death—as if two teams of publicists had boiled them down to their most bland and inoffensive versions. Trump appeared to have been coached, or at least prepped, on what the questions would be. There were no sudden pivots to sensitive territory, there were just leading questions about his brother's death and his emotional landscape (if, God forbid, such a thing exists). Kelly asked Trump about how he feels about his campaign, what he's learned from his many marriages, and if he was harboring some inner anger or hurt, or had been bullied as a child. Towards the end, Kelly even asked about Trump’s favorite books and movies. ("All Quiet On The Western Front" and "Citizen Kane." I call bullshit on both.)

These are squishy magazine profile questions for an actor promoting an Oscar contender. These are not questions you ask one of the most controversial candidates in American history. The Trump segment on "Megyn Kelly Presents" felt like a 20 minute long campaign video for the candidate. And from where I'm sitting, it read like a desperate attempt to get back into Trump's good graces, from both the network and Kelly herself. The candidate—historically temperamental and typically petty—was practically gloating with his triumph, while being just as evasive and simpering as ever. Kelly was on tenterhooks, and he seemed like he'd just woken up that day. Fittingly, ThinkProgress observes that he lied almost immediately.

To be sure, there was something a bit knowing in the questions about Trump's character. They were the primetime news anchor’s way of asking “so, why are you this awful?” But it made the interview one about Trump the man, not Trump the politician, and it’s the latter that is salient here. A great deal about Trump was left unsaid. Fusion’s Katie McDonough (formerly of Salon) made a list of questions Kelly could have asked instead, such as:

Donald Trump has a record of lying about things, like how Ted Cruz’s father maybe conspired to assassinate John F. Kennedy or how he is winning “every poll” with Latino voters. Will he stop lying quite so much if he wins the presidency?

Donald Trump has said—and then said he didn’t say—that he would “take out” the families of suspected terrorists and that the military would follow his orders even if they are illegal. Does he still plan to commit war crimes as part of his foreign policy platform?

Without asking these questions, both Kelly and Fox look complicit in these contradictions. And Kelly, in particular, forfeits almost all of the journalistic goodwill and liberal-to-moderate credibility she had just hours earlier. The audience watching at home may not see it that way right now, but I imagine that every time Kelly speaks on Trump in the future, this interview will be dredged up and examined once more.

For what it’s worth, in a world where fawning profiles sometimes are the only way to get access to a cranky interviewee, “Megyn Kelly Presents” isn’t even a very good fawning profile. Kelly was trying very hard to be charming—but it came off strained. One of Kelly’s strengths, she’s said herself, is her inability to be anything but “hard-charging” when she’s talking to someone in a position of power. Because this special was quite the opposite of that, Kelly’s whole demeanor felt about two degrees off-center, from making mild, bad jokes about interviewee’s marriages to her weirdly alien demeanor while speaking directly to the audience. In between contrived small talk and her obvious discomfort at speaking to the camera while standing on a white stage, Kelly came off distractingly graceless. (Her elephantine posture shifts on stage would have made Tyra Banks, host of “America’s Next Top Model,” cry hot tears of rage.) Given how much promotion this special has gotten, it is bizarre that “Megyn Kelly Presents” came off cheap and poorly directed—starting with the low-budget montages, muddling through the basic interviews, and ending, cringingly, with Kelly announcing her new book: “Settle For More,” now available, obviously, for pre-order.

It is disappointing that Kelly seems to think that this compromise of integrity is worth a book deal and her job at Fox News. There may well be more to the story we’re not hearing—Kelly seemed very concerned about how this publicity was affecting her children, and people have done dumber things for their kids. But this interview was a mockery of her oft-cited critical thinking and personal beliefs. Up until last night, Megyn Kelly was one of the few women who nearly every concerned party would take seriously when she started criticizing Trump’s values. Now that she has chosen to kowtow to his bullying, that rather important position is empty. This is a state of affairs that makes the title of her book rather too poignant: Kelly might have gotten more money and more job security out of this decision, but it is difficult to argue that she did anything other than settle for the mediocrity of aggrandizing yet another rich white guy with something awful to prove.