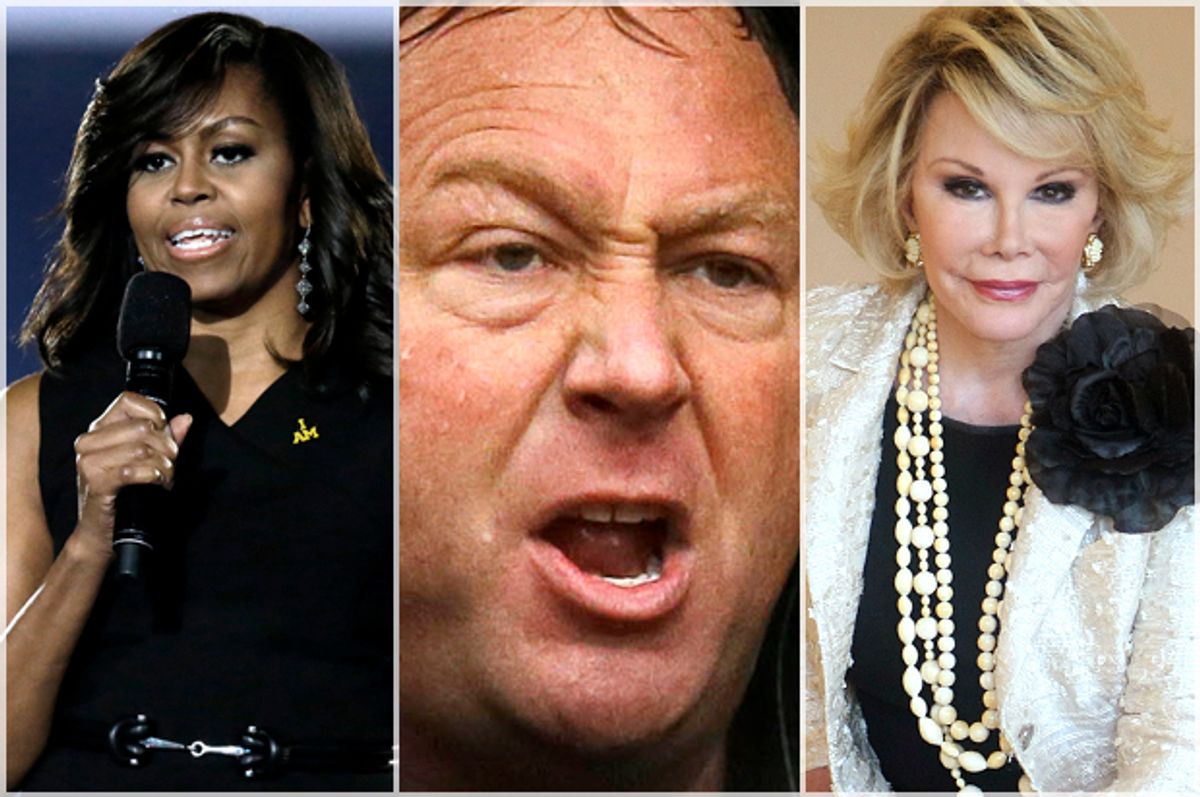 Normally, when we think of conspiracy marketeer and exploiter of paranoiacs, Alex Jones, we think of ludicrous theories about chemtrails and shapeshifting lizard people from outer space. It's mostly gibberish delivered with a sense of urgency and drama, allowing those of us who are somewhat well-adjusted to rest assured knowing that Jones is almost always wrong, lying or both. Mostly, it's brainless fun to occasionally check in with Jones, if for no other reason that to watch him lapse into a Peter Finch outrage coma because, for example, President Obama allegedly used “tiny planes and helicopters” to deliberately move a super-tornado toward an Oklahoma town. (Yes, Jones really said this.)

Every once in a while, however, Jones burrows deeper into his necrotic gray-matter and yanks out an idea that goes beyond the ridiculous and perfectly illustrates just how much of a spasmodic prick he can be. For instance, whenever Jones discusses how 9/11, the Boston Marathon bombing or, worse, the Sandy Hook massacres were so-called "false flag" operations and the victims were actors, Jones' crazy train careens off the rails, beyond X-Files territory and into the realm of inchoate nastiness. He ceases to be a somewhat harmless sideshow chicken geeker and, for the purposes of building his personal wealth, he tastelessly chooses to besmirch innocent, defenseless victims of terrorism and America's gun fetish -- many of them being children.

This brings us to today's ugliness.

You might've seen the cartoon floating around Twitter and Facebook. It's a single-frame editorial cartoon by an artist named Ben Garrison, in which First Lady Michelle Obama is visually compared to Melania Trump. The First Lady is -- get ready to laugh out loud — drawn as a man in drag, complete with masculine arms and a strategically placed crotch bulge. Trump is drawn like a pageant winner, with a long formal gown, white elbow-length gloves and a Miss America pose. The caption: "Make the First Lady great again."

We're not breaking any news by describing Garrison's hackish strip as an unequivocally misogynistic and racist cartoon presented without satire or irony. It's a horrendously unfair jab at the First Lady, who, by all reasonable and objective accounts, is stunningly attractive -- especially for a 52-year-old mother of two under tremendous career pressure. In addition to being racist and misogynistic, the cartoon is also transphobic, suggesting that a transgender woman can't be a "great" First Lady. (Michelle Obama isn't trans, obviously, but the cartoonist thinks she is, and, in his mind, this somehow disqualifies her from being a great FLOTUS.)

For many years now, Alex Jones has been theorizing how the First Lady is transgender or, in some rants, simply a man who's clandestinely disguised as a woman because President Obama, Jones says, is a closeted gay man.

Not surprisingly, Jones is one of the most notorious homophobes-slash-transphobes on the radio, and routinely attacks LGBT citizens for engaging in a war against straight people. In fact, one of his better-known theories is that the U.S. government is actively tainting the packaging of juice boxes in order to reduce the testosterone levels of young boys, thus turning them into gay men. It has something to do with the apparent existence of "endocrine disruptors" in the lining of the boxes. Jones erroneously believes there's a correlation between low testosterone and homosexuality, even though studies have proved that testosterone levels in gay men are the same or in some cases higher than straight men. The point being that gay men aren't genetically gay and can therefore become straight with the appropriate therapeutic or pharmacological therapies.

— Jones introduced the cartoon by singing Aerosmith's "Dude Looks Like A Lady." Again, on top of being misogynist and transphobic, Jones should never ever sing. Ever. It sounded like a weedwhacker chewing into a mound of hyena cadavers. It's also the least clever and most out-dated reference in the history of pop culture references, just below "Where's the Beef?"

— Jones continues by describing how he's had "doctors" on his show who've analysed the First Lady's physique and determined that it's nearly impossible for women to have broad shoulders and arms like Obama's, even though it's really not impossible at all. Jones, who's only 42-years-old but who looks twice that age, might be jealous that a woman is fitter than he is, given how he's slowly transforming into a shelled avocado.

— He said, "She's always got this pooch -- like she's wearing either a codpiece or has genitalia." Interesting that an alleged straight man like Jones has spent so much time obsessing about the crotch area of a person who he thinks is a man, complete with a "pooch." Also, yes, it's safe to assume the First Lady has genitalia. Female genitalia. And if she were trying to disguise the fact that she's a man, according to Jones and all of the self-identified "doctors" who've appeared on his show, why the hell would she wear a codpiece to emphasize her crotch? Perhaps it's the video game controller the president uses to control the tiny helicopters and airplanes.

— Jones' best evidence proving his theory is the existence of a "giant viral video phenomenon for, like, eight years that's she's a man." Warning: don't show Jones any Vines by Zach King. He'll probably attribute King's seamless visual effects stunts to Satanic super-powers. By the way, there are also viral videos proving that Alex Jones is, 1) the late Bill Hicks, 2) a CIA operative, or 3) a "zionist shill." If theories presented in viral videos are true, then Alex Jones has some explaining to do.

“Don’t forget,” Jones said, “the famous comedienne Joan Rivers said, ‘Of course everyone knows she’s a tranny.’ She’s dead serious, ‘She’s a man.’ Deader than a doornail in a routine operation where basically she had fire poured down her throat and was a fire-breathing goblin. Dead on arrival. Shoot your mouth off, honey, you will die.”

Yes, the First Lady turned Joan Rivers into a "fire-breathing goblin." So, not only does Jones believe the Obamas are pulling off a sensationalistic hoax, but they're also murderers who whack anyone, including comedians, who reveal their secrets. Of course, Jones doesn't explain how the hell Joan Rivers would know for sure, but who cares about things like evidence or details when there are unbalanced listeners to exploit?

“I really think — her daughters don’t look like her — I really think this is some weird hoax they did again,” he said, “just like he didn’t get sworn in on the Bible, it was the Quran. All this weirdness, I mean, I used to laugh at this stuff, but man, it’s all about rubbing our noses in it. I think it’s all an arranged marriage, it’s all completely fake and it’s this big sick joke because he’s obsessed with transgender, just like some weird cult or something. I think Michelle Obama is a man. I really do. I really do. I believe it.”

Jones has spent countless hours on his show digging into this alleged plot, and yet President Obama is the one who's "obsessed with transgender?" That's rich.

While Jones' anti-trans rants aren't the only ones to appear on the AM radio dial lately, they're arguably more dangerous given how his audience is predisposed to believing utter bullshit and, in some cases, acting upon it. We already know that one of Jones' lackeys, a former wrestler named Dan Bidondi, has advised his YouTube viewers to bomb abortion clinics. It's not a stretch to consider how his listeners could easily be inspired to take action against LGBT citizens who they believe are perpetrating similar Obama-style scams.

The anti-trans mania being stirred by Republicans has already motivated at least two attacks on women who were falsely believed to be men posing as women. Meanwhile, exactly zero cases have been reported of men disguising themselves as women in order to molest girls in women's bathrooms. Zero cases in 17 states and 225 cities where non-discrimination laws exist. But the next time another innocent person is physically accosted for not appearing sufficiently feminine, we have no choice but to turn our blame in the direction of professional flimflam artists like Jones for helping to incite it.