We don't know how to talk productively about disability and mental health, and in times like this it really shows 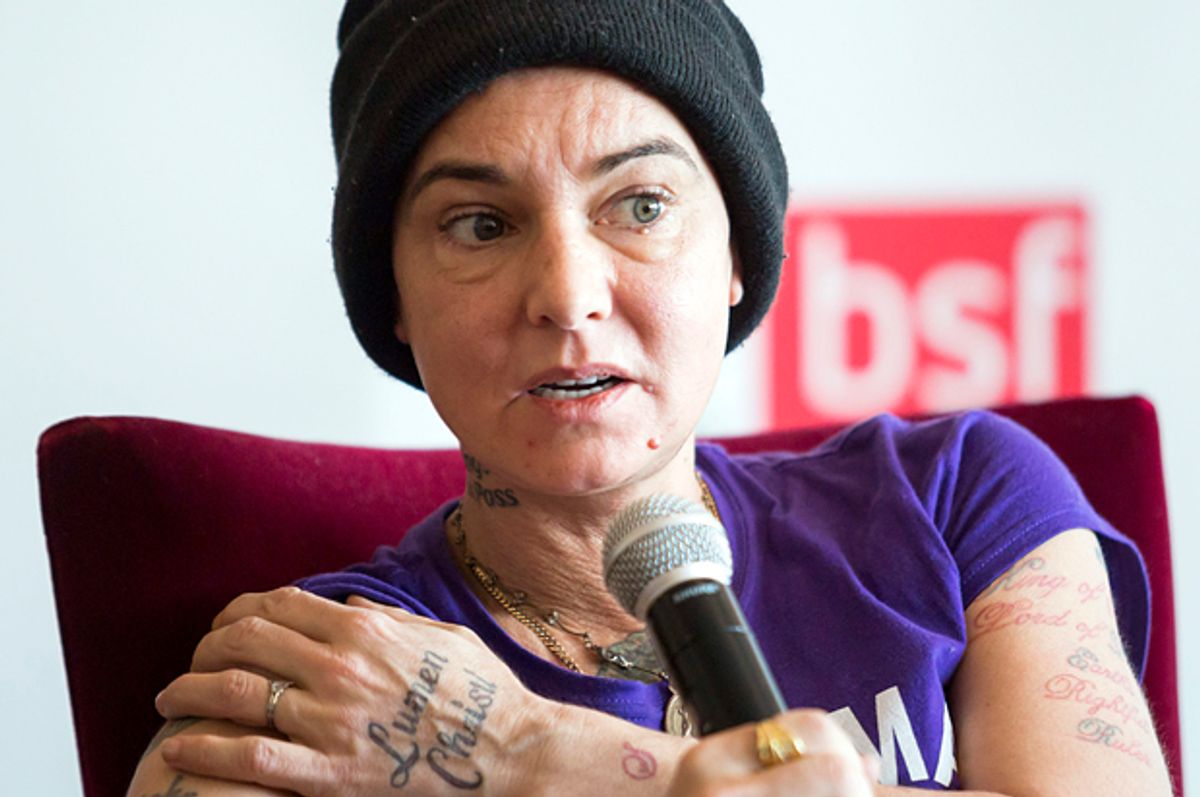 On Monday, Sinead O'Connor was reported missing after never returning from a Sunday morning bike ride. In a statement to Billboard, Wilmette, Illinois, police noted they were "seeking to check the well-being" of the Irish singer. "A caller has expressed concern for her well-being and no other information is available at this time." O'Connor was found safe later that day, reportedly at a nearby hotel, but later that night took to Facebook and posted an open letter to ex-husband John Reynolds.

The lengthy note started with a pointed message meant for her son, Jake. Here's an excerpt: "You tell that evil son of ours that a person who suffers from two fucking medical conditions of which the symptoms include suicidal compulsion isn't being manipulative if while he is being a fucking chauvinist bully like his grandfather they say they're going to or feel like killing themselves. You all abandoned me FOR BEING SUICIDAL.”

Although many of the responses to her letter were kind and sympathetic, some were far harsher. O'Connor was called a "trainwreck" and "crazy," told to "stop blaming everyone else for your problems" and characterized as someone looking for attention. One commenter insinuated she should've just killed herself, while another bluntly said, "Can someone get this bitch on some meds??!!"

As outside observers, it's not our place to diagnose O’Connor with an illness or disorder. But it's sobering to see the stunning lack of compassion for someone who freely admits she's struggling right now—especially since it's coming from an artist who's been rather open about living with a mental health condition. In 2014, she revealed she had been misdiagnosed with bipolar disorder, when in fact she has post-traumatic stress disorder (PTSD). (This isn't necessarily well-known, since she did a prominent interview with Oprah in 2004 in which she discussed living with bipolar disorder.)

However, it's not uncommon for celebrities in the midst of public crises to be minimized or treated with derision. When Britney Spears shaved her head and started acting erratically back in early 2007, a psychoanalyst speaking to ABC News theorized she was "acting out" and characterized her allegedly leaving rehab as an act of rebellion. In other cases, tabloids exacerbate the sense that celebrities are just looking for attention: Amanda Bynes' arrests, driving issues, bizarre wigs and Twitter rants were breathlessly chronicled by news organizations and the paparazzi.

How the media frames crises after the fact doesn't help, either: Lists chronicling "epic," "funny" or "spectacular" celebrity meltdowns abound—such as this one lamenting "celebrity nutjob" Charlie Sheen's newfound calmness by asking, "Where has all the crazy gone?" This flippancy further entrenches the stigma associated with mental health—something that lingers despite ongoing (and growing) efforts to recognize and combat negative stereotypes and associations in the media.

Characterizations of people with physical or other obvious disabilities can often be just as ignorant. Back in March, in a story referencing Phil Collins demurring about launching a world tour, the Broward Palm Beach New Times wrote, "How can a guy travel the world when he needs a cane for every step he takes?" (Full disclosure: The paper removed this sentence after I pointed this out to them.) Rapper 50 Cent recently was forced to apologize after filming an airport worker and joking on social media that he was "high" and "crazy"—when in reality the worker has autism and social anxiety.

And Kylie Jenner and Interview magazine were slammed for being ableist after a cover shoot in which the model was photographed in a wheelchair, used as a fashion prop. "The wheelchair may have drawn attention to Kylie and her lifestyle, as they intended," wrote Marie Claire, "but it did so by trivialising the lifestyles of disabled people in the process."

When celebrities come across as fallible, it tends to make people especially uncomfortable: It underscores that neither fame nor money insulates people from potentially having a disability or living with a mental illness. These cracks in the façade can be tough to reconcile, since often the whole premise of celebrity is unattainable perfection. But because celebrities have an elevated (and, at times, glamorous) stature, it's sometimes difficult to remember that they're not superhumans.

In fact, the common thread linking these examples—from sensationalistic coverage of celebrity meltdowns to ableist media tropes—is dehumanization. Jenner's photo shoot uses a wheelchair like a couture fashion accessory, a slap in the face to (and ignorant of) the many women whose chairs are anything but a prop. Inspiration porn, meanwhile, reduces those with disabilities to one-dimensional objects with few complexities. Having this dehumanization play out on social media adds to the unreality of the situation. It's much easier to forget there's a real person behind the crisis when a celebrity is memed (e.g., Britney's shaved head) or referred to via catchphrases ("Winning!"). And it's also far too easy to let this dehumanization seep into real life, and color our encounters with the people around us. (That's not idle conjecture, either: A sobering 2010 study found that college students' empathy had declined in the last 30 years, even as narcissism increased sharply.)

In light of this, it's no surprise that the polarizing reactions to O'Connor's Facebook posts perhaps had to do with weariness, or the perception that she's crying wolf. In 2011, a series of tweets perceived to be suicidal drew the police to her home in Ireland, while O'Connor has habitually used her Facebook artist page as a sounding-off board for matters ranging from a custody battle to politics to her own situation. "I have been unable to work," she wrote in her open letter. "I have lost last year's income and this year's. I have had enormous medical expenses, and enormous trauma because of your torturing of me."

These posts have had real-world consequences, of course: In late 2015, a string of worrisome posts hinting at a potential suicide attempt was the catalyst for medical attention, while recent allegations that Arsenio Hall gave Prince drugs spurred the host to sue her for defamation. Still, O'Connor deserves empathy rather than mockery, support and understanding rather than dismissiveness or scorn. As Salon's Mary Elizabeth Williams observed last year, "While she’s desperately pleading for love on a Facebook page, perhaps she’s gaining some measure of comfort from what her fans can offer instead — just their support."