Neoliberalism is a pestilence: Thank the gig economy for Donald Trump, Marine le Penn and Alternative for Germany 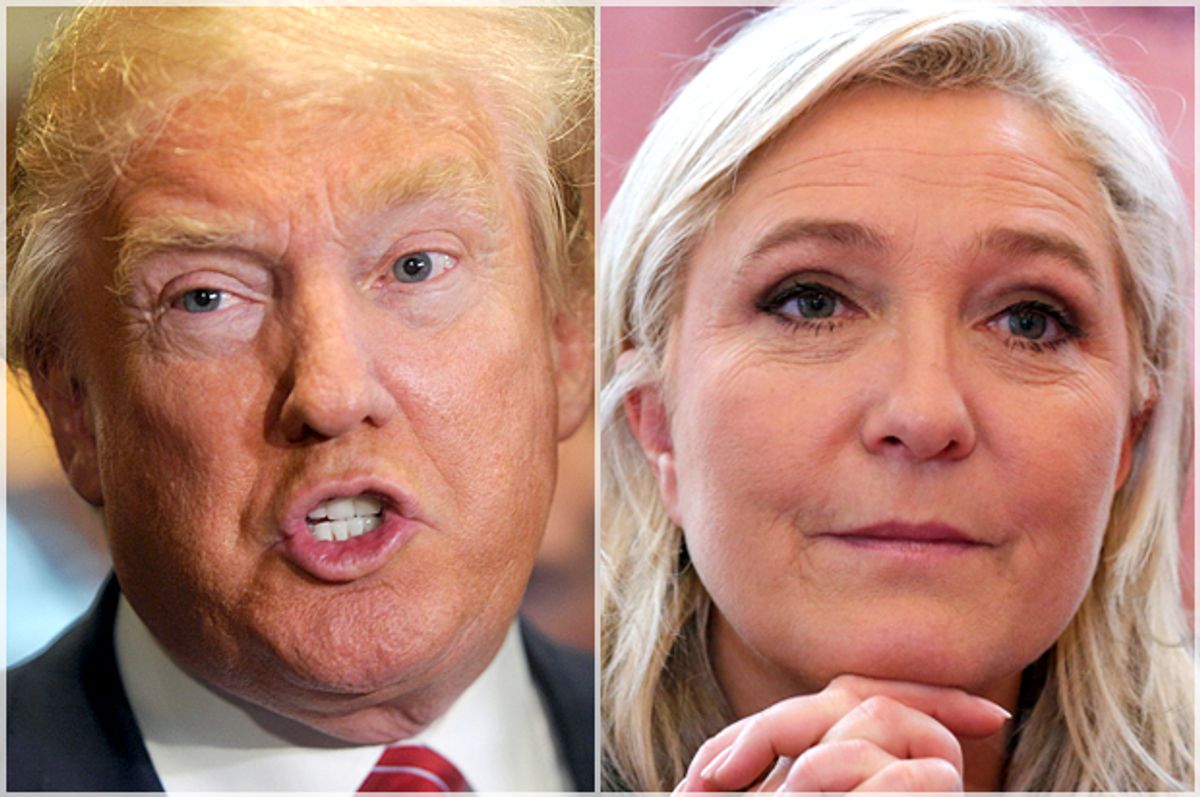 Politicians and pundits in America wonder where the rip-roaring popularity of protest candidates Donald Trump and Bernie Sanders originated. The answer may lie in Europe.

Trump and Sanders, in defying conventional political expectations, follow a long list of European populist leaders. Over the last two decades, the continent has seen the rise of Marine le Pen in France; Geert Wilders in Holland; Silvio Berlusconi and his successors in Italy; the People’s Party in Switzerland; the Freedom Party in Austria; the Progress Party in Norway; the Alternative for Germany. The list goes on.

Regarding the rise of Trump and Sanders as extraordinary events risks mystifying them. It also fails to acknowledge the powerful forces these politicians thrive on. Looking more closely at the rise of populism in Europe over the past two decades gives us a better understanding of today’s American politics and the forces driving protest politics' success.

Europe lights the path the US has embarked on

In recent research with Michèle Lamont at Harvard University and Elyas Bakhtiari at Boston University, my coauthors and I link the success of Trump’s kind of politics to the worldwide adoption of neoliberal economic policies.

Neoliberal policies are government measures that shift control from the state to the market. Examples are the privatization of health care, the gig economy and the deregulation of the energy market. Our research describes how like the U.S., European countries rolled out many such neoliberal policies in the 1990s and 2000s.

The figure below describes this trend for Eastern and Western Europe from 1990 to 2010. Values on the vertical axis are scores on the Chinn-Ito index of capital account openness, which are a commonly used measure of neoliberalism. The chart shows the growth of neoliberal market reforms across Europe. The trend started in the West, but Eastern Europe is catching up.

Pushing education, health care, transportation and security into the market has introduced global economic forces into everyday life. People today work for companies owned by foreign investors. They drive on roads that are in foreign hands. They compete with workers from abroad or face unemployment because their jobs have been outsourced to a low-wage country. These changes force citizens to realign politically and reconsider their solidarity with others as traditional values and expectations fall apart.

Citizens’ diminishing solidarity with the poor, the rise of anti-immigrant sentiments and the growing populist vote are different aspects of social exclusion. We link these to the adoption of neoliberal policies across Europe.

Our research reveals the intricate relationship between those policies and the ways in which citizens define who belongs, who is deserving and who is worthy. Although exactly how neoliberalism impacts social and political life in different societies depends on a country’s political history and its traditions of solidarity and citizenship.

Citizens in those countries most affected by neoliberalist policy reform have come to draw strong exclusionary lines between themselves and people at society’s margins, specifically Muslim immigrants and the poor. They express animosity toward unemployed “freeriders” and concern about how (Muslim) immigrants are changing their country. Citizens most resistant to change make scapegoats of newcomers or of traditionally marginalized groups in society.

The following two graphs plot the growth of neoliberalism across Europe against the change in popular animosity toward Muslims and the poor. In both charts, the horizontal axis indicates change in a country’s rating on the Heritage Foundation Index of market openness and private sector autonomy over 20 years. All data are publicly available from the European Values Study and Quality of Government Institute.

In the following chart, the vertical axis indicates change in popular animosity toward poor people. This is measured by the proportion of citizens who blame poverty on laziness or lack of will.

In the figure below, the vertical axis indicates change in animosity toward Muslims, measured as the proportion of citizens who say they do not want a Muslim as their neighbor. The straight lines have been drawn to show the trend that best fit the observations for countries in the West and East of Europe, respectively.

In Central and Eastern Europe, the adoption of neoliberalism goes together with more acceptance of ethnic and religious others, but with stronger animosity toward the poor. These countries’ citizens increasingly perceive the poor as lazy and undeserving of government help.

Conversely, in Western Europe, we find less exclusion of the poor, but more animosity toward ethnic and religious others. Citizens increasingly do not want Muslims as their neighbors.

Neoliberalism privatizes risk and emphasizes personal responsibility, which leads to more narrow views on what it means to be a valuable member of society. People unable to work or unsuccessful in finding employment are not considered equal citizens.

Neoliberal policies provide political fuel for populist leaders on the left and on the right. These leaders feed off of similar sentiments felt in different countries by comparable groups of people, exposed to common currents across the Western world. Neoliberalist policies favor increased competition, which increases tensions between groups, undermines solidarity and triggers resentment projected at perceived newcomers: the Muslim immigrant today is the Jew of yesterday.

Trump’s populism, in particular, is fueled by a fear of Islam and other perceived threats to liberty and security. The rise of left-wing populism of the kind that Sanders represents can, in turn, be seen as a response to the economic fears of poor and working-class citizens feeling marginalized by international market forces.

Trump and Sanders are the embodiment of a populist sentiment that has been sweeping through the West since the 1990s. After communism and fascism left the continent, populism stood up to take their place.

The U.S. shows a trend similar to European societies: increased xenophobia and far-right politics reinforce animosity, especially in the context of a growing fear of Islamic radicalism worldwide. Our survey of Europe suggests that these sentiments can be mobilized in either political direction. Which way will America go?