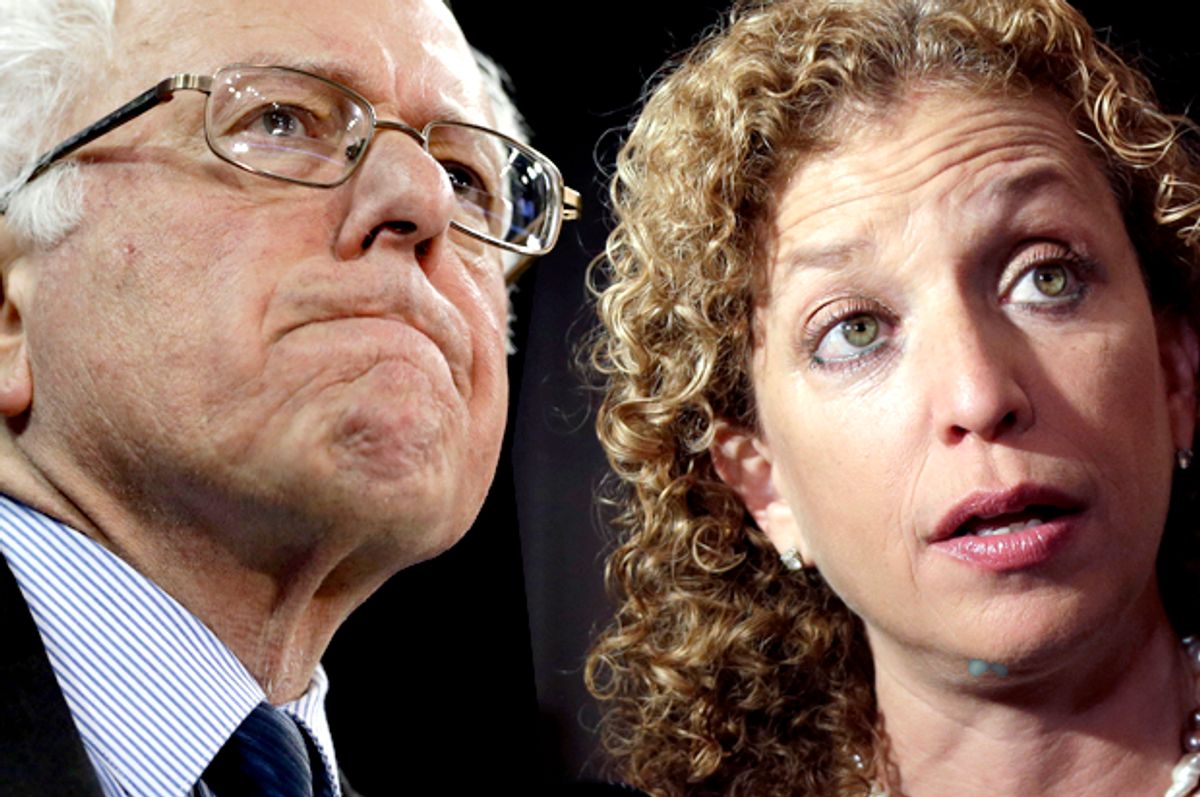 The Bernie Sanders campaign has singled out the head of the Democratic Party for attempting to undermine the Vermont senator's bid for president.

Democratic Party leaders exploited the chaos at the Nevada convention this week, which Sanders and his backers say was thoroughly undemocratic, in order to attack his campaign.

Democratic National Committee Chairwoman Debbie Wasserman Schultz, the former co-chair of Hillary Clinton's presidential campaign, asked Sanders to condemn his supporters, who protested what they said was blatantly unfair party behavior at the Nevada convention on May 14.

Sanders responded with a statement on Tuesday condemning violence, but also blasting Democratic Party leadership for falsely claiming that the Sanders campaign has a "penchant for violence."

He accused the Nevada Democratic Party of using "its power to prevent a fair and transparent process from taking place," listing a series of incredibly undemocratic measures that party leaders carried out, which helped Hillary Clinton win by just 30 delegates, even when Sanders had 64 more who were suddenly deemed ineligible.

Sanders added that, "during the Nevada campaign, shots were fired into my campaign office in Nevada and apartment housing complex my campaign staff lived in was broken into and ransacked."

Asked about the incident, which was grossly exaggerated by many media outlets and pro-Clinton pundits, in a CNN interview on Wednesday, Sanders campaign manager Jeff Weaver subsequently criticized the DNC head, accusing her of “shade-throwing.”

“He categorically condemns any kind of threats that went on — absolutely unacceptable,” Weaver prefaced. But he singled out DNC chair and former Clinton operative Wasserman Schultz of “throwing shade on the Sanders campaign since the very beginning.”

Weaver noted that the DNC has drastically limited the number of presidential debates to just six (the 2008 presidential campaign had 26 debates, which helped the then little-known Barack Obama get more attention). He added that these few debates have been scheduled at some of the worst possible times, such as late on weekend nights.

The Sanders campaign manager also recalled how the DNC revoked access to Sanders' voter data, and stressed that the DNC and Clinton have a biased joint fundraising agreement. Weaver said this agreement siphons money from state parties into the DNC, helping Clinton's campaign.

He added that this joint agreement, which has helped the Clinton campaign suck up hundreds of thousands of dollars, possibly violates campaign finance laws.

In his CNN interview on Wednesday, the Sanders campaign manager singled out Wasserman Schultz. “Look, I gotta say it’s not the DNC,” Weaver clarified. “You know, by and large, people at the DNC have been very good to us. Debbie Wasserman Schultz really is the exception.”

Wasserman Schultz rejected Weaver’s remarks in another CNN segment with an internet acronym.

“My response to that is hashtag SMH,” she said, completely writing off the Sanders campaign's many criticisms. “We need to focus on one thing: get through this primary and work to prepare for the general election.”

Debbie Wasserman Schultz has long been a staunch supporter of Hillary Clinton. In 2008, she served as the co-chair to Clinton's presidential campaign.

She remains proud of her role in the Clinton machine to this day. In April, she told the Florida media, “Secretary Clinton, I think is arguably one of the most qualified people — assuming she announces her candidacy — who have ever run for president. I was proud to support her in 2008."

"Of course as DNC chair, I will neutrally manage our primary nomination contest, assuming we have one," she said in April.

"But Secretary Clinton’s a very special, a special leader and a special woman," Wasserman Schultz added

"But I say that neutrally, because I will be neutral during the primary," she once again qualified.

The Observer's Michael Sainato has argued that "Wasserman Schultz is depending on Hillary Clinton winning the Democratic nomination to further her own political career."

Politico has made similar observations. "Throughout her time as chair, Wasserman Schultz has turned off colleagues, other top Democrats and current and former staff for a management style that strikes many as self-centered — even for a politician — and often at the expense of the DNC or individual candidates or campaigns," it reported in February.

"Many top Democrats, including some she counts as supporters and friends, privately complain about her trying to use the DNC as a vehicle for her own personal promotion, and letting her own ambition get in the way of larger goals," Politico added.

Wasserman Schultz was handpicked by Obama to lead the party in 2011, but soon fell out of favor. "When she sensed Obama was considering replacing her as chair in 2013," Politico noted, "she began to line up supporters to suggest the move was both anti-woman and anti-Semitic."