Unhappy endings: You're not alone if you feel sad after sex

No one really knows what causes postcoital dysphoria, but it's more common than it seems. 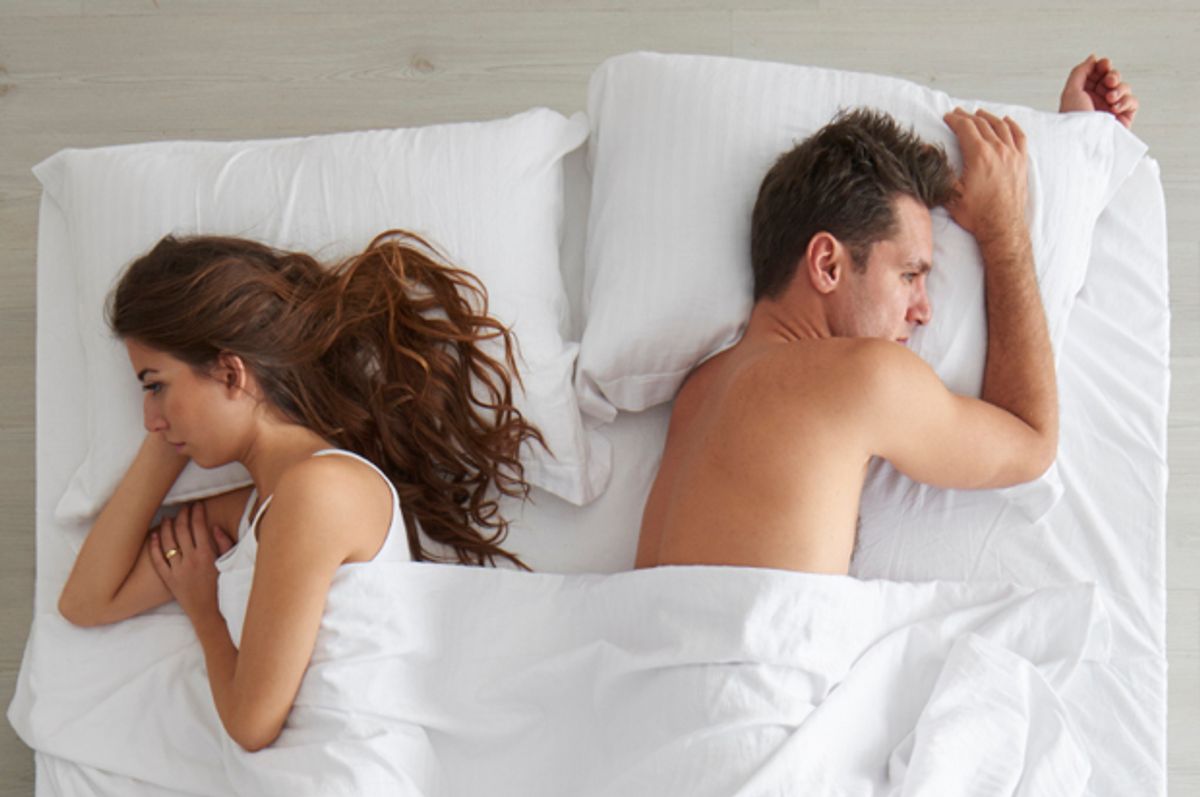 Conventional wisdom tells us that sex feels good, and sadness does not. Experience tells us that, sometimes, the two experiences collide.

Of course, we can rationalize our way around that in a number of ways. Maybe what gets us down is the realization that, like all things in life, sex is fleeting. Maybe it’s knowing that after losing yourself in another body, after spending time in a space where time doesn’t matter, you will inevitably fall back inside your own head, where time and other ugly things are very much alive. Maybe it’s that tragic juxtaposition between sex and separation that does us in. Or maybe these are just the rantings of a person prone to depression.

The depression link was what New York-based psychiatrist Richard A. Friedman ran with when he started prescribing antidepressants to patients complaining of the post-sex blues. “Prozac and its cousins, selective serotonin reuptake inhibitors, commonly interfere with sexual functioning to some degree,” he wrote for the Times.

“I thought that if I could somehow modulate my patients’ sexual response, make it less intense, it might blunt the negative emotional state afterward,” he wrote, concluding, “Sex may be the most physical of acts, but depression can be physical, too.”

Post-sex feelings of sadness, clinically known as postcoital dysphoria, is a largely unexplained phenomenon, and the lack of research into the subject hasn’t helped bring us any closer to understanding why it happens. While an overall tendency toward depression may provide one answer, it’s probably not the only one out there.

In a 2015 study, researchers found that out of 230 college-aged participants, nearly half had experienced postcoital dysphoria at least once in their lifetimes. Lead researcher Robert Schweitzer told Cosmopolitan that about 1 percent of the exclusively female subject pool experienced some degree of post-sex sadness every time they had sex. Just over 5 percent had experienced melancholy, depression, anxiety, agitation, tearfulness, or aggression after sex in the four weeks prior to taking the survey. Schweitzer explained, "We don't know terribly much because it's so counterintuitive to the dominant thinking about what sex should be like." He added, "But it is more common than anyone expects." Perhaps it is worth noting that the study focused only on consensual sex between happy partners.

While Schweitzer’s study looked into a number of factors, including arousal, lubrication and orgasm, he found the most important predictor of postcoital dysphoria to be a history of childhood sexual abuse. Still, that connection wasn’t found to be terribly significant. Other theories suggest hormones are to blame, namely the fact that the body creates prolactin in order to counteract the release of dopamine, the hormone responsible for sexual arousal. Some even claim that the condition serves an evolutionary purpose, though what that is, is unclear. Sure, depression may be an effective deterrent to having lots of sex, but let’s hope that’s not what nature intended.

An explanation that makes some intuitive sense is that sex is a release of more than just physical tension. "Sex can certainly be an experience of letting go and losing oneself; it might be that it's the point of orgasm," Megan Fleming, a New York-based psychologist, said. "It's like all that stuff that's been bubbling up under the surface is released. Everything you've been holding back, there's this huge exhale."

Another theory revolves around the idea of “sexpectations,” or what happens when the realms of fantasy and reality fail to sync up.  When sorting through her experiences with postcoital dysphoria, one participant in Schweitzer’s survey said, 'Maybe it's to do with sexual expectations, like sex is meant to be one thing — beautiful and loving — and maybe for me, it's not."

That bit might speak to her choice of partners.

Still, it might also be beneficial to realign our expectations of what we should feel after sex. Sadness tends to get a bad rap, and that doesn’t make it any easier when it pops up for an unexpected visit. It might not be everyone’s preferred emotion, but feeling sad about feeling sad probably won’t get us any farther. Until some kind of science gets to the bottom of the phenomenon, the best medicine might just come in a heaping spoonful of self-reflection.