The pointless and anti-Constitutional law is now in the hands of the governor, who's in a no-win situation 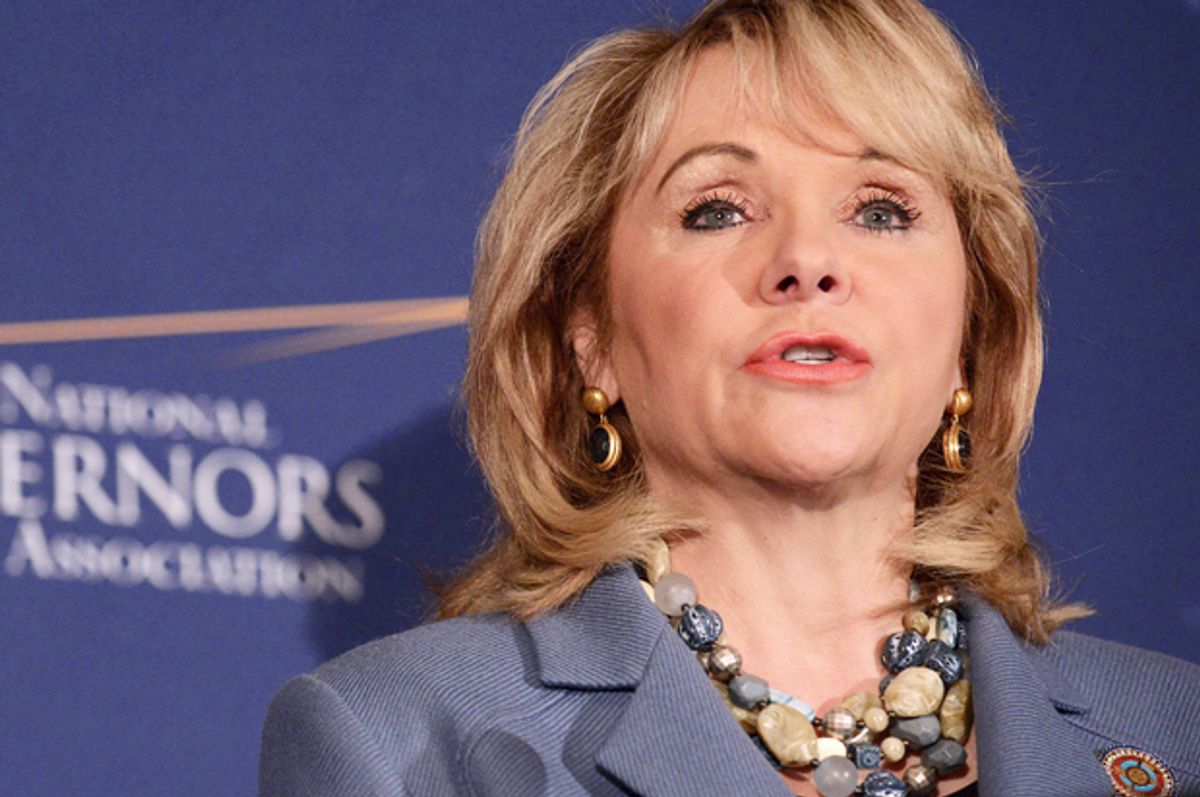 Thursday, the Oklahoma state senate, without any debate, passed a bill banning abortion outright, by making it a felony and stripping the license of any doctor that performs one. The state house had passed the same bill.

Now it goes to Gov. Mary Fallin's desk to be signed, putting the governor in an untenable situation of having to either sign a bill that the Supreme Court deemed unconstitutional over 40 years ago or offending the hardcore religious right of her state, which refuses to accept secular government. Signing the bill to placate the Bible-thumpers and letting the courts deal with it is not a good option for Fallin, either, as Oklahoma is in budget crisis and doesn't have the funds to defend a law they know has no chance of being upheld.

The move is a surprising one, not just because it's such a political poison pill for the Republican governor, putting her in a no-win situation that you'd think her Republican colleagues that dominate the state legislature wouldn't want to put her in.

The timing of the decision simply doesn't make sense. In less than a month, the Supreme Court is expected to release its decision on Texas's HB2 abortion omnibus bill. HB2 is the crown jewel of the anti-choice movement, which, under the leadership of behemoths like Americans United for Life and the SBA List, has pursued an incrementalist strategy of using medically unnecessary state regulations on abortion clinics to shut them down. For instance, the Texas law under consideration right now requires hospital admitting privileges for abortion providers, which is a problem, since abortion almost never requires hospitalization and most hospitals refuse to credential doctors, like abortion doctors, who never refer patients to them.

If the Supreme Court upholds HB2, it will shut down nearly all abortion clinics in the state, both demonstrating the success of the incrementalist strategy and paving the way for other states, like Oklahoma, to come up with medically unnecessary, unmeetable regulations on abortion clinics to shut them down, all without having to ban abortion outright. Pass a law that says doctors have to keep a live alligator in their office. Require all clinics to be no taller than 2 feet. If the Supreme Court issues a broad decision allowing this sort of regulation, there could be a lot of opportunity for creative regulation to shut down clinics.

Now it's also possible that the Supreme Court overturns HB2, which would mean that the anti-choice movement has to go back to the drawing board. But one would think that the Oklahoma legislature could wait to find out before running off, half-cocked, passing laws that they know full well the court has to overturn, because they clearly and inarguably violate Roe v Wade.

Considering that the court hasn't even issued its ruling yet, this move might even backfire on anti-choicers. Because the court is bound by precedent to reject efforts to eliminate legal access to abortion, anti-choice activists and legislators have spent the past few years pretending that these regulations are about "women's health" and not stopping abortion access. Yes, that means batting their eyelashes and pretending to think, for instance, that a clinic needs a million dollar surgical suite in order to give a woman a pill she takes at home, a hilariously transparent ruse.

But passing this law, which bans abortion outright, removes any pretense that the movement is about protecting women. The Supreme Court decision on Texas is probably written already, but you'd think anti-choicers would be wary of ripping the woman's-health mask off to reveal the true face of misogyny underneath until after they had a decision in hand. Why risk it, when doing this could anger the court and have them turn against the movement?

It's hard to really say why. The bill was passed with very little debate, and most public statements from supporters are boilerplate self-righteous preening about "life" from people whose hypocrisy would be comical if it weren't so rooted in hate.

Still, it's hard not to read this as an outright rejection of the incrementalist strategy. Which is nuts, because while it's slow-moving and expensive, the incrementalist strategy works. Chipping away at abortion access, bit by bit, has been incredibly effective at closing clinics down, which has been happening across the country at a record pace. Even state regulations that are overturned in court can sometimes be effective. After all, the clinics often have to shut their doors while the litigation is hashed out, which often costs them so much money they can never reopen. And all this is going on without banning abortion outright, which draws negative press and has to be immediately dismissed in court as a flagrant violation of Roe v. Wade.

It's hard, under the circumstances, not to notice the gender dynamic in play. In the past decade or so, in an effort to deflect accusations that the war on women is motivated by misogyny, the anti-choice movement has focused on putting women in charge. Americans United for Life, which is the architect of the incrementalist strategy and has written the model legislation that HB2 and other regulatory schemes are based on, has been operating under the leadership of Charmaine Yoest. SBA List's president is Marjorie Dannenfelser and most of their leadership is female.

These female leaders have been outspoken enthusiasts for the incrementalist strategy, and they have been more effective than the decades of male leaders of the anti-choice movement before them. But they are still women, so it isn't hard to imagine that the still male-dominated Republican party isn't too interested in hearing their advice and expertise. Sure, these women who keep cautioning patience know from hard experience what they're talking about, but screw it, these Republican men in the Oklahoma legislature — and nearly all of them are men — are just going to go do what they want, consequences be damned. And leave a woman — Gov. Fallin — holding the bag.

Not that one should feel sorry for anti-choice women, of course. They are nasty people who want to chip away at the rights of other women because they think other women are a bunch of sluts. If anything, it's mostly funny watching all these women carefully concoct a thoroughly considered legislative strategy, only to watch a bunch of men who don't know what they're doing throw it out without a moment's thought. You throw in with misogynists, you can't be too surprised when they don't take you seriously, ladies.