When did we decide it's OK to pay profs peanuts and graduate students in debt, but splurge on big names for 1 event 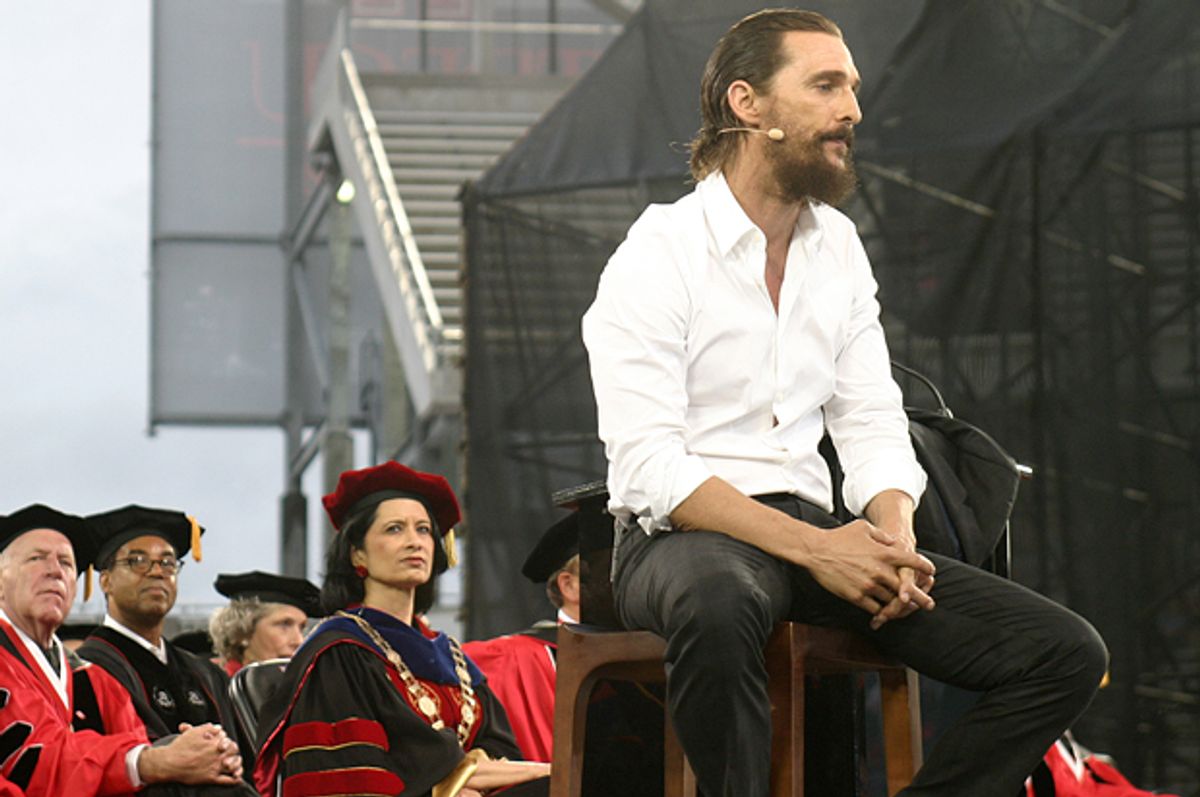 HOUSTON, TX - MAY 15: Actor Matthew McConaughey speaks at Commencement at the University of Houston at TDECU Stadium on May 15, 2015 in Houston, Texas. Credit: Louis Dollagaray/MediaPunch/IPX (Louis Dollagaray/mediapunch/ipx)
--

If you’re one of the thousands of people about to graduate college over the next few weeks – or one of the thousands heading to a campus to watch the procession -- you probably want a lively, intelligent, even inspiring commencement speech. Everybody wins if this is fun, if new graduates head into the world with a sense of purpose, with a jolt of energy, with good memories about an important day.

But lately, the costs of commencement speakers have started to ramp up. The Associated Press had made a series of record requests and reports them today.

As many colleges struggle with tight budgets, some have drawn sharp criticism for paying hefty speaking fees. The University of Houston, which increased tuition this year, paid $166,000 to bring Matthew McConaughey to speak last spring, including $9,500 for his airfare. The University of Oklahoma paid $110,000 to book journalist Katie Couric in 2006. Both speakers donated their fees to charity, but their costs sparked a debate about whether colleges pay too much for pageantry.

Now, I’d like to see a lot of these people speak. And what’s the harm in it? Well, all of these schools are public universities, meaning that most of these fees come from the public. But you don’t have to be an anti-tax zealot to get frustrated by this.

The point of universities, especially public universities, is to educate a wide range of students. And while some of them do a great job, many of them have been jacking their fees up, making their education increasingly inaccessible. And nearly all of them have been paying the people who do a lot of the teaching – adjunct faculty members -- very little. As The Atlantic reports:

Adjunct professors earned a median of $2,700 per semester-long class during the 2012-13 academic year, according to an AAUP survey of thousands of part-time faculty members. While varying classloads make it difficult to calculate the typical adjunct’s annual earnings, NPR reported in 2013 that the average yearly pay for adjuncts was between $20,000 and $25,000, and a March 2015 survey conducted by Pacific Standard among nearly 500 adjuncts found that a majority earn less than $20,000 a year from teaching.

So universities are paying some of these speakers several times more for a 45-minute speech than they pay the people who actually teach their classes in an entire year.

This all said, giving an accomplished person whose accomplishments fit the mission of the school bother me a lot less: For Rutgers to pay Toni Morrison – a novelist who has won a Nobel Prize, after all -- $30,000 begins, at least, to make sense. And McConaughey is a great actor – throwing a few grand his way so he can address acting students, or graduates of a film and television program, is fine. Similarly, alumni of a university are appropriate speakers: They can give graduates a sense of the transition from school to life.

But when schools hire speakers for their celebrity status, when they have no connection to the institution and little relationship to its course of study, when public funds go to people who are overexposed and already wealthy for the sake of ginning up publicity for the school… Maybe it’s time for these institutions – which get all kinds of advantages as non-profits – to rethink their priorities. Commencement is not “Entertainment Tonight.”