I watched Hillary Clinton's forces swipe Nevada: This is what the media's not telling you 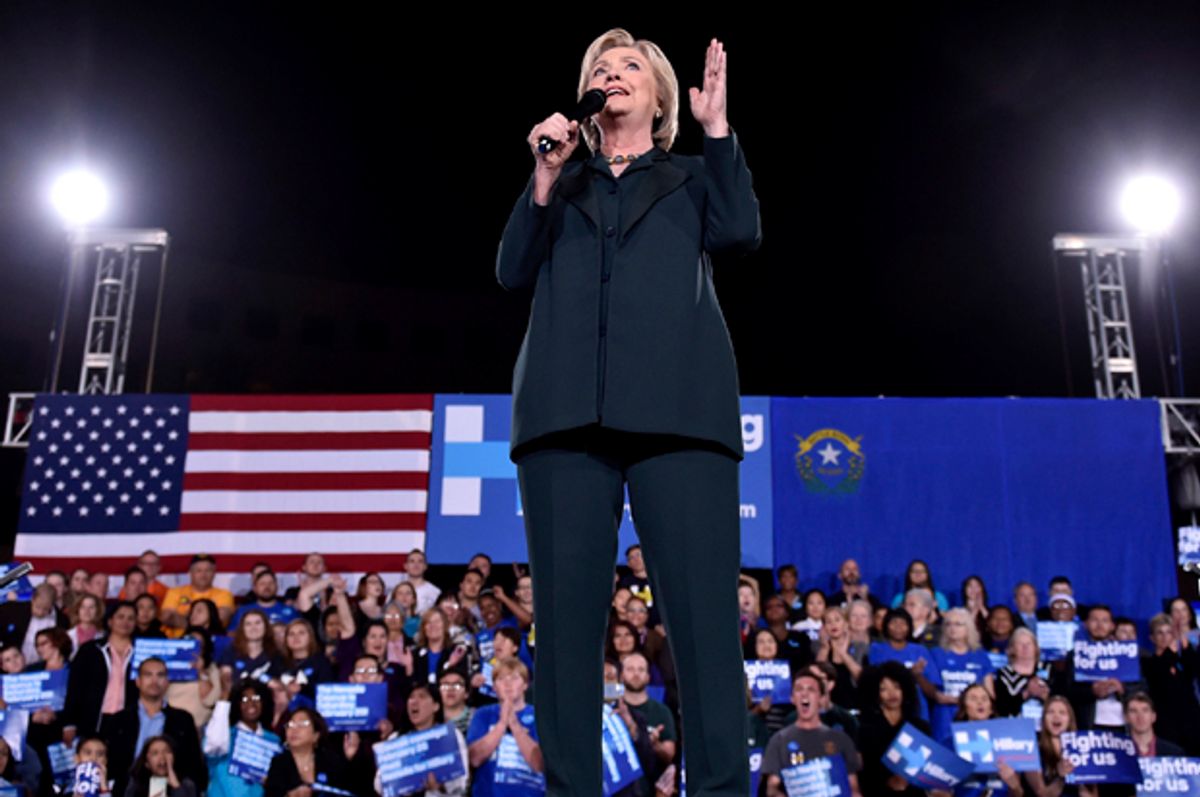 It probably wasn’t the best time for me to go to Vegas. My beloved father had just died the week before, and I was feeling hazy and vulnerable, prone to weeping at the slightest provocation. Grief made me feel like I had no skin and no brain; grief had turned me into a cloud, and I was in that floaty state when I got on the plane with my husband—a state delegate headed to the Nevada Democratic Convention—and our 6-year-old son. I wasn’t sure what would happen once we got to Vegas, whether all the lights and bells would hammer me back into my body, or whether I would drift even further away from myself, hover like the cigarette smoke over the casino floor.

I had wanted to be a delegate, myself, but knew I was going to be out of town during the county convention in April, so I didn’t put my hat in the ring at the February caucus, where I had served as a precinct captain for Bernie. It was my first election season in Nevada, my first caucus, and the whole process seemed wild to me, taking what was normally such a private experience—voting quietly in an individual booth—and turning it into a political game of Red Rover, people taking sides in a room, trying to sway folks to come over to their side, their candidate; it was a civil game in our precinct, but I could see how easily things could turn nasty. I was grateful my husband had volunteered himself to be a county delegate, and was excited when he got the email that he was chosen to be a state delegate, as well. Nevada has a strange three-tier system—Hillary had won a majority at the February caucus, but more Bernie delegates showed up at the county caucus, negating Hillary’s win, so the race for delegates at the state convention promised to be a tight one. I looked forward to seeing the process in action; I never expected that process would become so chaotic and surreal, although I had become used to surreal of late.

We arrived late Friday night and all around me, women were dressed to the nines and looking miserable. My heart broke for them. I wanted to know their stories; why were they so unhappy? The weight of crumbling expectations seemed to fill the smoky air. I found myself sending little silent affirmations to all these sad, fancy women—You are beautiful, I beamed to them. It will be okay. Perhaps I was channeling my dad, who always did whatever he could to make people feel better about themselves.

The convention started out well the next morning. Everyone seemed excited to be there—people were decked out in their Bernie and Hillary gear, smiling, passing out buttons, bustling about. I signed a petition to bring solar energy incentives back to Nevada, feeling happy that my son could witness this whole process, witness democracy in action. He and I found a place to sit on the floor on the side of the room as my husband took his seat in the Washoe County Bernie section near the front of the hall. The chairwoman, Roberta Lange, gave a rousing welcome, reminding all of us that we were there to defeat Trump and his misogyny, his xenophobia, his hate, his lies. The room felt unified, energized, cheering as a group; I felt inspired, felt yes, we can do this together.

It wasn’t long before things took a turn. At 9:30, a full half hour before registration closed, Lange read the results of ballots that had been passed out to early arriving conventioneers regarding temporary rules for the convention, rules which would discount the results of the county convention (the second tier of the caucus process, where Bernie had won more delegates), rules which would require that all votes at the convention be decided by voice alone, and which ruled that the decision of the chairperson would be final. These temporary rules had passed with flying colors, which did not sit well with the Bernie delegates, many of whom had not been given ballots. Suddenly half the people of the room were on their feet, shouting “No!!!!” My son and I jumped to our feet as well, added our voices to the chorus. It felt good, all those voices of resistance vibrating through my body. I started to feel less like a cloud. I felt myself drop back into my body, surrounded by all these bodies yelling “No!”, feeling alive inside my skin.

Then people began to chant “Recount” and my son and I joined this call, too, throats aching, adrenaline coursing. Lange took the temporary rules to a voice vote. A hearty round of “Aye”s rose up from the Hillary side of the room, but when it was time for the “Nay” vote, the response was so loud, I felt it shake my every cell, felt it alter my heartbeat. The room was explosive with “Nay”s, roaring with it, and yet Lange decided in favor of the “Aye”s, which only set off more yelling. I thought about my dad, how once when I was a kid, I wanted to do something and my sister didn’t, and he said “If someone says no, you need to listen.” Lange definitely didn’t listen to all the “no”s in the room.

At some point, my son was overwhelmed by the noise, so we went back to our hotel room, where he wanted to play “ship take over,” a game that involved jumping from one bed to the other. I was grateful for the relative quiet and peace, but really wanted to be back in the convention hall, where it felt like a different kind of takeover was taking place. There is no excuse whatsoever for the vile and violent threats Lange has received following the convention—I hate that she is receiving these threats, and condemn them with every fiber of my being—but it is clear that she ignored true democratic process throughout the day and should be taken to task in a civil, political, way.

From reports from my husband and other conventioneers, and from my own firsthand experience as my son and I wandered in and out of the hall as the day progressed, it appeared that Lange didn’t listen to much of anything the Bernie delegates had to say; she appeared not to count the votes from that side of the room; she ejected dozens of Bernie delegates who didn’t have a chance to defend their eligibility, and who, if they were allowed to stay, would have given Bernie more delegates than Hillary; she didn’t allow for a “minority report”; she cut off microphones when people challenged her.

When I read news stories about what happened that day, I don’t recognize much of what is being reported—while there was plenty of chaos, I witnessed no violence (nor did my husband or anyone else I knew at the convention). Bernie supporters were not trying to change the rules, as some journalists reported: they were justifiably outraged when the chairperson changed the rules without a majority vote, and then more outraged when, later, after a motion for a delegate recount, she shut the whole convention down with a pound of the gavel and threatened arrest to anyone who stayed in the room. So many of the news reports of the convention feel like gaslighting in that regard—stories trying to make it sound as if the Bernie delegates were a bunch of crazy nutjobs, when all they wanted was to be heard and counted.

I am not a Bernie or Bust-er—I will vote for whoever gets the Democratic nomination—but I know many Bernie supporters who would have voted for Hillary changed their minds after what they experienced that day, and my husband said that even though he’ll vote for Hillary if she becomes the nominee, it will be hard for him to do so after what happened at the convention. At a time when Democrats should be banding together to defeat the most dangerous candidate I can imagine, we are imploding, ourselves, which is terrifying. I only hope we can pull ourselves together as a party before November.

The day after the convention, my family wandered around Vegas in a bit of a daze, both from grief and from disbelief about what had happened the day before. I saw more sad, dolled up, women; I sent them more love. We let ourselves have some fun; we won stuffed animals at Circus Circus (including a purple octopus I wore on my shoulder the rest of the day—might as well keep the surreality going), we ate lots of good food, we watched fountains dance, we went to the aquarium and gaped at sharks and glowing blue moon jellies. After the death of a loved one, at least for me, every little detail seems desperately important and at the same time, somehow nothing seems to matter. I stood before those jellyfish for a long time and felt myself drift back into a cloud-like state, but it was okay. Peaceful, especially after a day witnessing so much disunity. The jellies were there with me, and for a moment, we were all blue and we were all floating together.