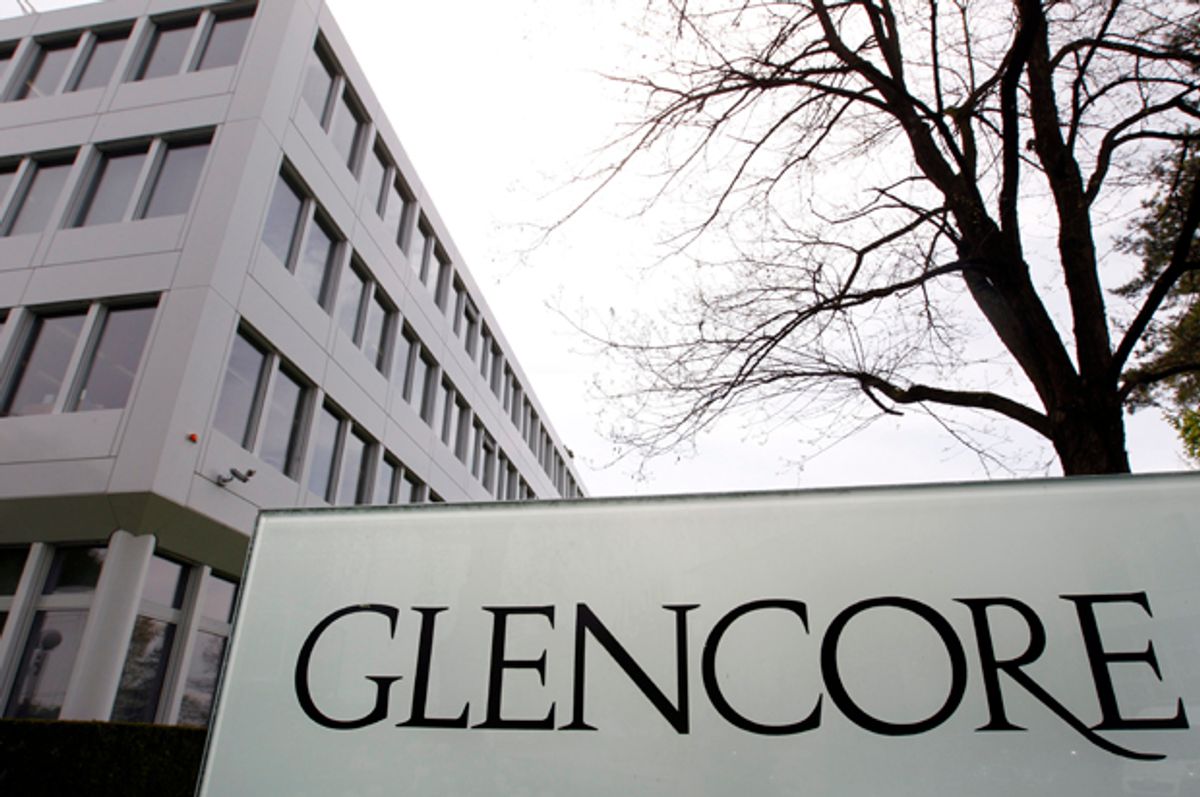 Giant corporate entities have become so far-flung and impersonal that "human relations" departments have been created within the soulless structures to cloak the fact that there's really nothing human about them. HR is mostly known for sending the corporate rank and file peppy motivational memos that boil down to: "The beatings will continue until morale improves."

The beatings of American workers (wage slashing, axed benefits, union busting, mass firings, offshored factories, and brutish abuse of worker rights) have been increasing in frequency, intensity, and scope — mostly ordered by CEOs in the posh, faraway headquarters of multi-tentacled global empires. These detached autocrats are wrecking the lives of hardworking people for no reasons but institutional greed, calculated self-interest ... and because our corporate-coddling government lets them get away with it. Let's meet one of the most powerful of these lords of rapacious global capitalism — Glencore.

Never heard of Glencore? Neither had I until February, when I visited some members of the United Steelworkers Union outside a Glencore-owned aluminum plant (Sherwin Alumina) on the Texas Gulf Coast. In 2014, after months of negotiating a new contract, Glencore suddenly tossed these workers a take-it-or-leave-it offer that would drastically cut wages, increase healthcare costs, and eliminate pensions for new hires. (Glencore's profit that year was $4.6 billion). Fed up, 98 percent of the union's members voted against the contract. Glencore's reaction was to lock them out and replace them with contract workers.

Some 5,500 miles away from these proud, principled workers, you'll find Glencore's sleek global headquarters (dubbed by Reuters as "the biggest company you never heard of") in Baar, Switzerland.

Not merely big, it's colossal — the tenth largest corporation in the world — with 160,000 employees in more than 50 countries on six continents. It produces and trades coal, oil, gas, metals, minerals, foodstuffs, and other commodities. Indeed, its nondescript name is an acronym for GLobal ENergy COmmodity REsources, and it owns a huge chunk of the world market for many internationally traded resources, including zinc, copper, nickel, aluminum, grain, and oil. Uniquely, Glencore combines the production and shipping of more than 90 different commodities with the entirely different, corporate culture of high-speed computer trading of commodities.

Now, let's hail the chief, the uber-competitive and ravenous corporate dealmaker, CEO Ivan Glasenberg, whose $2.3 billion in personal wealth ranked him No. 301 last year on the Forbes list of the world's 500 richest people. Since joining Glencore in 1984 as a base-level coal marketer, Glasenberg moved swiftly up the executive ladder to become "the savviest trader on the planet." He dines with prime ministers and hobnobs with oligarchs, relentlessly pushing acquisitions, devising opaque partnerships, and gaining government favors that have made the conglomerate a dominating behemoth. But attaining, using, and holding such power in so many parts of the world can be, well, "untidy:"

Exactly. Which is why the workers in Texas are fighting this David-Goliath battle. To learn more, visit the United Steelworkers website at www.usw.org.