The conservative crackup: How progressives can exploit the GOP's implosion and attain an "earthquake election" 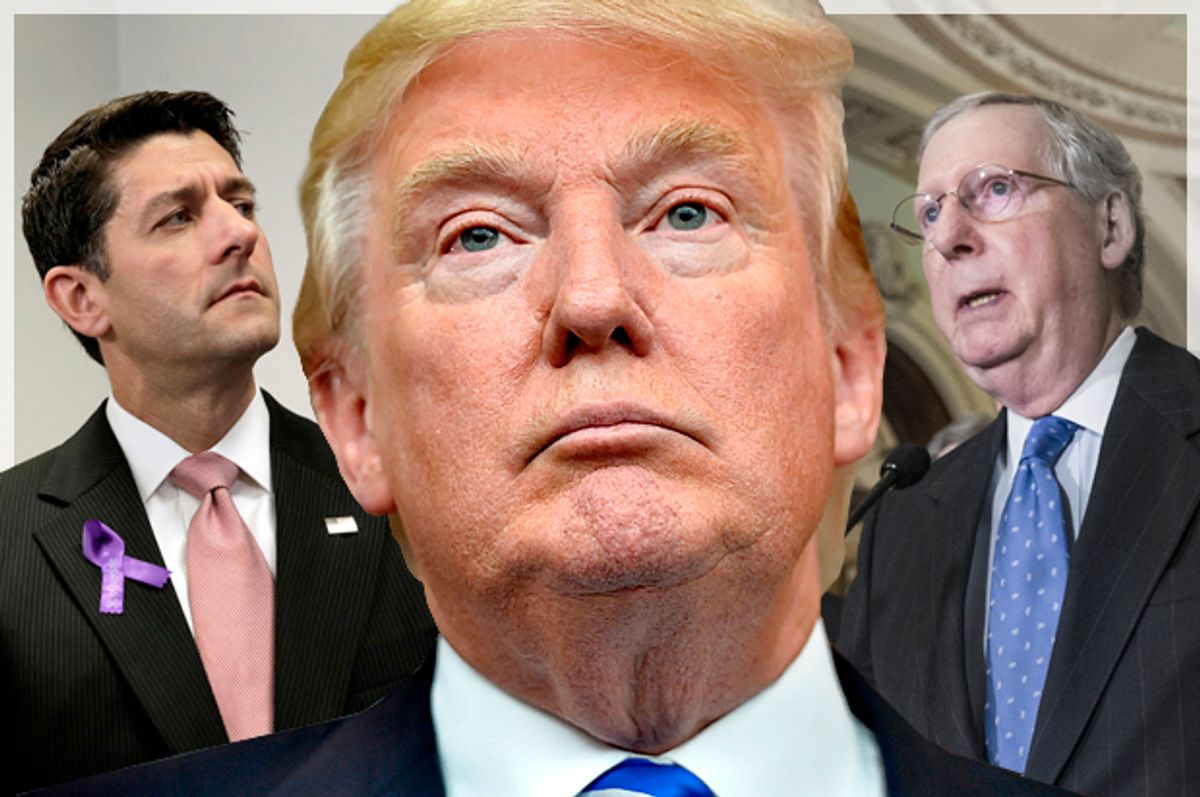 It's fair to say that most Democrats and a good many Republicans are still in a state of shock over the fact that a narcissistic, know-nothing,  billionaire demagogue is actually going to be on the ballot this November as the GOP nominee for president. Democrats are nervous that this outrageous character is going to be normalized over the next few months and there are signs that the media is on board with that project.  Many Republicans worry that he spells the end of their party altogether. And everyone aside from his fanatical following is desperately worried about what could happen if he actually manages to win the most powerful office on earth.

Take, for example, the comments by GOP strategist Mike Murphy on MSNBC earlier this week:

I think he is a stunning ignoramus on foreign policy issues and national security, which are the issues I care most about. And he’s said one stupid, reckless thing after another, and he’s shown absolutely no temperament to try to learn the things that he doesn’t know, and he doesn’t know just about everything. …The guy has a chimpanzee-level understanding of national security policy.

When he's right he's right. And it's not just foreign policy where Trump shows a pan troglodyte level of understanding. Just Thursday night Trump appeared at a Chris Christie fundraiser and said to the audience of big donors, “Look, a lot of you don’t know the world of economics and you shouldn’t even bother. Just do me a favor, leave it to me.” He talked up his proposal for a 35 percent tariff on imports if an American company moves its manufacturing out of the country without clearing it with him first:

"At least the United States is going to make a hell of a lot of money. And these dummies say, 'Oh well that's a trade war.'"

"Trade war? We're losing $500 billion in trade with China. Who the hell cares if there's a trade war?"

Apparently the Donald is unaware that trade wars have been known to lead to shooting wars. Or, at the very least, they tend to result in some very unpleasant economic fallout.  But then, knowing his history, these would be features, not bugs. Is it any wonder there's a growing sense of panic among sane members of both parties?

Right now polls are showing that Republicans are consolidating around him and it looks like a cage match in the works with Trump and the likely Democratic nominee Hillary Clinton in a close fought cage match. However, Trump is probably getting a post clinch bump while the two Democrats are still involved in an intense contest with their partisans still in their corners so these numbers aren't actually all that meaningful.

In fact, Democratic pollster Stan Greenberg is optimistic that Trump is actually going to be a Godsend for progressives if they play their cards right. He's looked beyond that superficial snapshot to the underlying structure of the electorate in the wake of Trump. In a memo he titles "The GOP Crash and the Historic Moment for Progressives" Greenberg writes:

We are witnessing the crash of the Republican Party as we know it, and progressives should dramatically change their strategy to maximize conservative losses and move the stalled progressive reform agenda in the election’s aftermath.

Rightfully shaken by off-year losses, low base turnout and Trump’s appeal to some union members, progressive strategy has been cramped by worst-case assumptions and by the goal of stopping the GOP from expanding their Electoral College map. That caution risks missing the opportunity to magnify GOP losses, expand the Democratic map and targets, shift control of states and legislatures, break the gridlock and create momentum for reform.

Greenberg narrows the Conservative Crackup down to what he calls a three-front civil war. The first front is between Trump and his Tea party followers against the Republican establishment. He characterizes their agenda as a "nationalist economic appeal" that attacks immigrants, trade deals and "disloyal" American corporations. Trump's basically appealing to a large faction that is upset with diversity and "political correctness". (I would just add that Trump's status as the King of the birthers made him a true hero to this crowd.)

The second front in the civil war is between the religious conservatives who are angry that the establishment failed to stop social progress under the Obama administration.  Their sense of betrayal over the failure to stop marriage equality is profound. This group is the reason why Ted Cruz came in second.

Both of those fronts in the GOP civil war are well-known by now. Plenty of pundits and analysts have looked at these splits to determine if they are fatal to the GOP's hope for any kind of national electoral success going forward. They do portend some major problems for the party but it's hard to see how it benefits the Democrats unless these folks just stay home or run third party candidates. It's the third front where Greenberg sees that opportunity and it's one to which nobody is paying much attention:

Third and just as important, moderate Republicans are deeply alienated from a GOP establishment that views them as illegitimate. This third front in the civil war has not been covered by the media, in part because no GOP candidate has been willing to seek their votes on the issues that matter to them.

None of the pundits have speculated that the silence on their agenda has anything to do with the primary or what will happen in the election ahead. The moderates are a stunning 31 percent of the party base, and they are heavily college-educated and socially liberal. They are conservatives on immigration, regulation, taxes and national security, but as a college educated majority, they accept the science and urgency of addressing climate change. And most importantly, they are the one bloc that accepts the sexual revolution. That changes everything.

I find that number of 31% very surprising. From what we see and hear in the media, the moderate Republican is as extinct as the dodo. I know a few who live in California, people I think of as "Disco-Republicans", who are essentially ideologically center-left but can't stand being associated with liberals for social/tribal reasons.  They refused to vote for Jeb and Rubio because they felt they were pandering too much to the conservatives! Greenberg thinks these people are getable for the Democrats; his polling shows that 10% are willing to vote for Clinton over Trump.

The question is what it will take to get them to vote for Democrats in this election, and perhaps, more importantly, to demonstrate to the Republicans that it's in their best interest to cooperate after the election on certain issues. They are already socially liberal so there no need to try to appease anyone on those important issues. Where Greenberg sees an opening is in national investment, bank regulation and corporate governance which dovetails nicely with the populist agenda coming from the left wing of the party as well.

But Greenberg believes that to maximize progressive gains, the party also needs to intensely focus on turning out certain voters "who now know the stakes." That would be the "Rising American Electorate" we've all heard so much about:

Our new poll on behalf of WVWVAF shows a 10-point surge in the highest measure of voter interest among Democrats, key parts of the Rising American Electorate (specifically, the unmarried women and minorities), and college-educated women, a key part of the Democratic coalition. Our focus groups for the Roosevelt Institute and WVWVAF showed us that millennials and unmarried women are closely following the GOP primary battles, the GOP’s hatred of Obama and Donald Trump’s xenophobia and sexism. They now understand the stakes like no time before.

He says that African Americans and Hispanics see their communities as being under attack and despite their suspicion of Clinton, millennials understand their values are at stake as well.

Trump’s chauvinism and hostility to America’s diversity has cost him electorally and led to the early consolidation of the Rising American Electorate. But the primaries also show we have a new opportunity to achieve an earthquake election and win strongly among both the RAE, and the working class (where Democrats have lagged) if they strategize to win the big economic argument.

It's hard to see a bizarre election such as this one as an opportunity to do anything but survive it. Trump is a wild card and the Republicans are like cornered animals right now, unpredictable and dangerous. But these situations do present opportunities as well and if Greenberg is right and the Democrats pay attention and all the stars align, we could come out of this with a big progressive win, setting the stage for a fertile time of renewal and progress. Maybe Trump's crazy campaign will end up having been a positive influence on America after all.