Your wedding season anxiety antidote: The weird, wild, unlikely romance of "The Lobster" 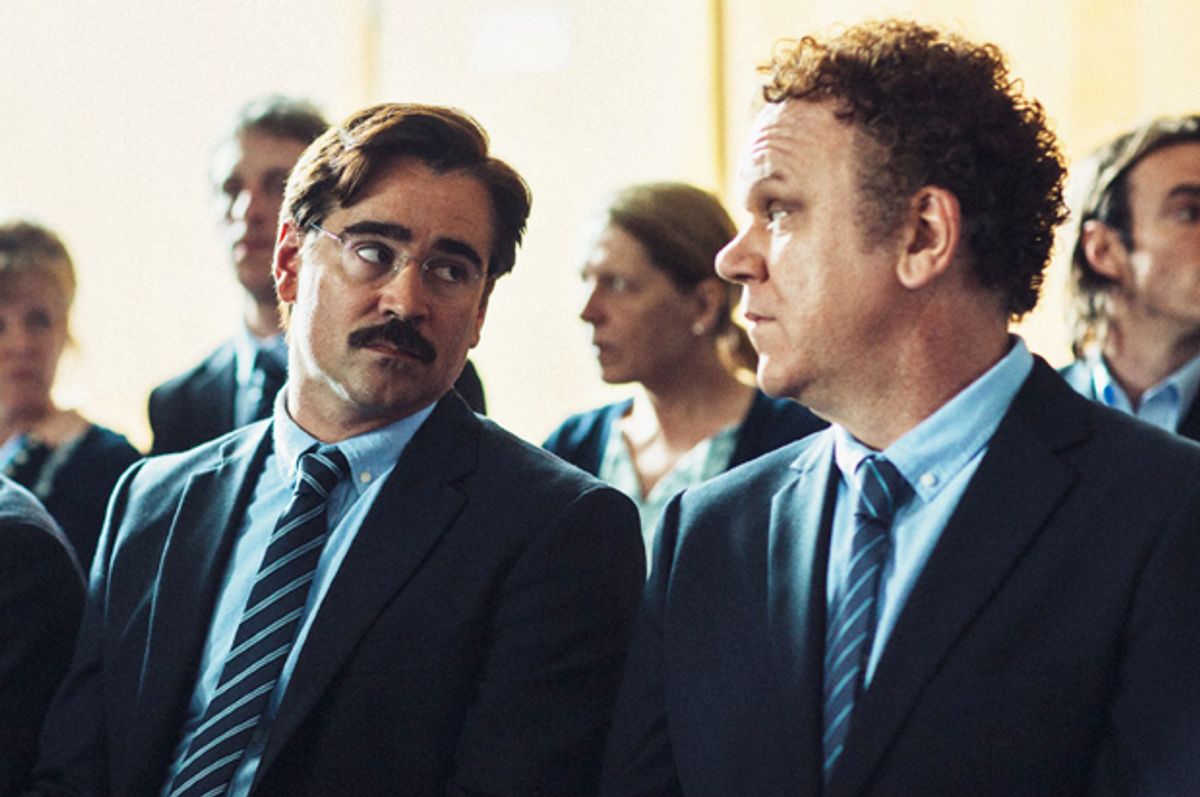 "It's no coincidence that the targets are shaped like single people and not couples," says a bow-tied trainer to a schlubby Colin Farrell, during a shooting drill that could only come from the sunless reaches of Yorgos Lanthimos's imagination (think "Dogtooth," in English, with fewer smashed molars). In his dystopian feature "The Lobster," such casual barbarism is set against a prim, archaic backdrop: an old-school resort for hapless singles to find a mate—and fast.

But below all the maiming, skinning and electrocution-via-toaster en route to conjugal bliss, the film reflects with startling accuracy a very current anxiety over what makes one count as a citizen. Nearly one year after the matrimaniacal fourth paragraph of "Obergefell v. Hodges," Lanthimos's unsettling tour de force reminds us of how chained to coupledom dignity remains at both the private and public level. In a scene early in the movie, the recently cuckolded and hence newly single David (Farrell) is partially handcuffed his first night at the hotel, "to show…how easy life is...when there are two of something rather than just one." Sound familiar? According to the Supreme Court ruling, sans recourse to state-sanctioned marriage, one is inherently "condemned to live in loneliness." As Michael Cobb put it in a searing New York Times op-ed, "Once again, being single is the dreary, awful, mournful alternative to marriage. A condition to be pitied, and quickly corrected by a sprint to City Hall."

What "The Lobster" does—and brilliantly—is simply reset the stopwatch for that sprint—if "loners," or single people, can't find a romantic partner within a 45-day period, they are transformed into an animal of their choosing. In other words, instead of becoming a dog lady, you get to become...a dog.

(Or a parrot. Or a pony. Or, in David's case, the eponymous "blue-blooded" lobster, which the hotel manager immediately deems "an excellent choice.")

Much of the film's humor, and brutality, relies on this premise, but just how absurd it seems depends on how attuned audiences are to the pressures experienced—by both men and women—to "settle down" by a certain date or go scuttling alone across the shore, destined to be boiled alive and die a slow, painful death with no one to hold their hand/claw.

"Lanthimos has constructed a world at once fantastical and mundane," says Christopher Orr of The Atlantic, "in which ideas such as love and sex are drained of their conventional meanings and imbued with new ones." And yet onscreen so many of these conventions persist in jagged relief, prompting laughter sharp from below the ribs. Loners of all races, shapes and sizes are paraded in and out of coercive meet-cutes; courtship follows a series of rote steps, often staged in what resembles a tacky '90s wedding hall (curtains drawn during the day to feign evening ambiance). At a dance intended to set the mood, a hired band plays stoically beneath a rainbow of balloons, while women in floral halter gowns make conversation with men they don't know. After a brief spin with David, Nosebleed Woman (played by a winsome Jessica Barden; like all characters besides David, she remains unnamed) stains his shirt, then officiously lists the methods for removing blood from fabric. "Just never use warm water," she warns, as though sullied cotton is all that's on the line.

In the case that loners successfully couple up, they are marched onstage and formally feted before the rest of the hotel guests. "Tomorrow, they'll be transferred to a double room, with a larger wardrobe and a larger bathroom," announces the hotel manager (a delightfully dry Olivia Colman). "They will remain in the double room for two weeks, then they'll be transferred to the yachts for a further two weeks." All that's missing is a Target registry, Egyptian cotton towels and a Honey Fund, and you have the trappings of a typical wedding.

"I'm very happy," reports the Limping Man (Ben Whishaw) to his (former?) friends, hand in hand with Nosebleed Woman, who brightly chirps, "Me too." To anyone who's ever suffered through a hackneyed wedding reception, such scripted valediction proves eerily on point.

As does the next scene, when Nosebleed Woman bids farewell to her Breck-Girl bestie who, sadly, has failed to partner in time and has one last day as a human. "You were, are, and always will be my best friend," she reads earnestly from a handwritten screed, "I'll think of you often, and I'll always wear those silver earrings you gave me for my birthday. I'll miss you…" When her friend suddenly slaps her on the face, it's a wake-up call for anyone who's ever spit platitudes at a single pal without fully considering the circumstances.

In such desperate circumstances as those onscreen (and they are—Lanthimos's gorgeous shots of such disturbing emotional topography remind one of Pier Paolo Pasolini's 1975 "Salo"), the singles' extreme measures in their quest makes fibbing on OKCupid seem more than forgivable. But the end result is often the same: a system that privileges pat compatibility is bound to churn out ersatz amour. As Cambridge professor Priyamvada Gopal puts it, "[W]e tend to flinch at the mention of 'arranged marriages,' that process whereby family and friends hunt out a compatible mate for you based on social, religious, lifestyle and economic indicators…[y]et we are riveted by…versions of this controlled mate-choosing accompanied by the amped-up rhetoric of romance, sexual attraction, and individual choice." Add the looming threat of a deadline, and this "choice" seems something less than one.

But for all its blank-faced cynicism, "The Lobster" isn't really against romantic love, or even romantic monogamous love, but rather the bedrock weight that society has placed on such a union, and the inevitable failure of faux unions forged out of fear of stigmatization. The connection developed between Colin Farrell and Rachel Weisz about halfway through the film is among the most tender affairs rendered onscreen in some time, in part because it is not prescribed but forbidden. Escaping the hotel to join a ragtag army of loners in the woods—for whom romance is punishable by a "bloody kiss" or other gruesome acts—David encounters the Short Sighted Woman (Weisz) while hiding behind a tree; they lock eyes, woo (via captured rabbits instead of roses), and gradually invent their own secret language to dodge suspicions of others. Honoring the comfort that companionship can offer, especially as one's body ages, the film even acknowledges that sometimes two are better than one. "He didn't know what it's like to get older," says the Short Sighted Woman of David. "He didn't know how much it hurts to be alone—how much it hurts when you cannot reach to rub pain ointment on your back and you are constantly in pain." Indeed, her offer to rub that ointment on his back—cutting the palpable tension between them like the daggers they all carry—is what cements their relationship, leaving them both in danger of being exposed.

NPR's Bob Mondello dubs the film a "rom-com," but to do so does injustice to both Lanthimos's lurid dreamscape and the staples of the genre. If "The Lobster" is a rom-com, then so is everything from "Gattaca" to "Blade Runner." But Mondello's right insofar that the film's heart—and ounce of humanity (quarter-ounce?)—beats most audibly in the dynamic between Farrell and Weisz, so touching (and sexy) are their creative flirtations, so convincing are they as clandestine paramours.

And while Bustle's Olivia Truffaut-Wong has claimed that women are "overwhelmingly seen as love-hungry, crazed and jealous, while the men stay sane," I found the opposite true: Lanthimos exposes the insanity bred in both males and females when they are pressured to partner. The Limping Man violently punctures his nostrils to effectively woo the Nosebleed Woman; David is so jealous at the idea that the Short Sighted Woman might be the recipient of another man's bloody rabbits that he physically accosts a fellow loner. If anything, the most rational—if savagely independent—character of the film is the Loner Leader, played by Léa Seydoux (in a much cooler turn than her "Blue Is the Warmest Color" rebel artist). Short Sighted Woman, moreover, voices the film's narration, an omniscient authority rare in general for females to assume. By comparison, many men of the film seem poor saps, and if anything such egalitarianism toward gender was refreshing, especially in a film so dark.

And dark it is, however romantic. In the film's final shot, a long take that somewhat mirrors its first, the Short Sighted Woman waits alone at a diner table for David to return. He has offered to do the unthinkable to prove his loyalty, and as each unnerving—and riveting—second ticks by, we wonder with her if he's coming back, if the two will make it out together. True love, in "The Lobster," does conquer all, but—as in so many great love stories—what must be sacrificed to achieve it is necessarily devastating.