Hillary must pick Bernie for VP: She may even need him more than he needs her

Yes, it's time for Democrats to unite, but also for Hillary to recognize she needs help with the progressive base 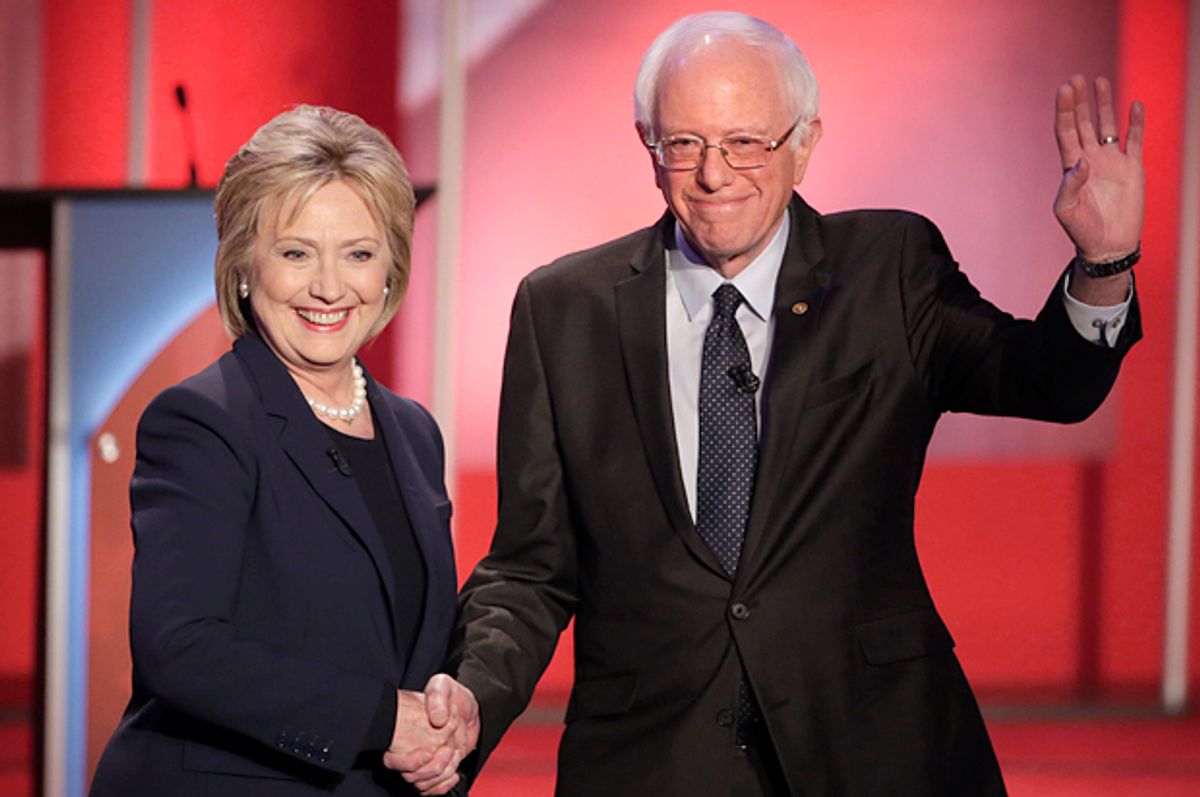 It’s time to bury the hatchet, Democrats. Supporters of Sen. Bernie Sanders need to accept that Hillary Clinton has the nomination all but sewn up, and Clinton’s supporters need to stop counting delegates long enough to face the fact that Sanders won the policy debate, hands down. With the end of the primary season just weeks away, the two candidates need to brush themselves off, shake hands, and begin quietly preparing to take on Republican nominee Donald Trump together – with Clinton at the top of the ticket and Sanders as her running mate.

After the primary contests in Kentucky and Oregon, Clinton holds a nearly insurmountable lead in the delegate count, but perhaps not enough of one to win the nomination outright without the help of the unpledged superdelegates at the convention. Since Sanders has shown no willingness to suspend his campaign, and since the superdelegates Clinton will need to secure the nomination can change their votes at any time, Clinton has an incentive to work with Sanders to ensure he doesn’t attempt a last-minute coup on the convention floor, just as Sanders has an incentive to work with Clinton to ensure he doesn’t get left out of the general election campaign altogether.

The opening move will have to come from Sanders. As it stands, if the latest kerfuffle over the party’s handling of the delegate count in Nevada is any indication, Sanders appears prepared to go to the mattresses in an all-out war for the top spot on the ticket. This is foolish. He has come too far, and achieved too much, to throw it all away on yet another principled defeat. There is an obvious compromise that gives everyone most of what they want: Sanders, the runner-up, agrees to throw in the towel in exchange for the vice presidential nod. That way, Clinton gets the nomination without another bruising and potentially embarrassing fight, while Sanders gets to inject his policy agenda into the general election campaign, not merely as a few carefully vetted planks in the party platform, but directly from the hustings as a member of the ticket.

Interestingly, voters are already ahead of the candidates on this one. A recent Rasmussen poll found that 36 percent of likely Democratic voters want Clinton to name Sanders as her running mate – almost double the 19 percent of voters supporting the next most popular vice presidential contender, Massachusetts Sen. Elizabeth Warren. This comes as a bit of a shock given that Sanders has barely registered in the early lists of potential vice presidential picks put forward by pundits and Democratic Party insiders.

But that’s hardly a surprise. If this election cycle has taught us anything, it’s that the pundits and party insiders wouldn’t know the mind of the American electorate if it bit them on the ass. In fact, putting Sanders on the ticket isn’t thinking outside the box at all. It’s basic political common sense. Between now and November, Clinton needs, first, to rally the Democratic base to boost lagging turnout, and second, win back wavering white middle-class independents attracted to Trump’s populist message. No other national figure in the Democratic Party is as well placed to do both these things as Bernie Sanders.

Joining the Clinton campaign is in Sanders’ interest, too. He has spent the last 25 years leading a valiant, but losing campaign against income inequality. Now, at age 74, he has at last caught a political wave and has a shot at effecting genuine political change. He can’t be president. He simply doesn’t have the votes. But if he plays his cards right, he could be one heartbeat away from the presidency.

The last year has taught us that Americans of all stripes, but especially young people and white middle- and working-class independents, are clamoring for the kind of substantive reform Sanders has been calling for. These are voters Clinton could lose, either because they hold their noses and vote for Trump, or because they don’t vote at all. But with Sanders as her vice president, Clinton could neutralize attacks to her left while unleashing a popular attack dog to persuade all those wavering working-class white men to vote their true economic interest.

Of course, this isn’t how the political class sees it. Much of the early chatter inside the Beltway on the vice presidential pick has focused on either winning voters in a crucial battleground state or throwing a bone to a loyal constituency like Latinos or women. The top two vice presidential picks “getting the most buzz in Clintonworld,” according to a May 14 piece in The Hill, are Ohio Sen. Sherrod Brown and Virginia Sen. Tim Kaine, two party stalwarts with the potential to turn their respective delegate-rich purple states blue. Other lists feature prominent Latinos like Labor Secretary Thomas Perez and Julian Castro, the current Secretary of Health and Urban Development. Elizabeth Warren’s name also gets tossed out as the bottom half a potential first-ever all-female presidential ticket.

But this is your granddad’s presidential election strategy. In a contest against Trump, who has labeled Mexicans as rapists and murderers and ogled his own daughter, if Clinton can’t win over women and minority voters, she won’t be president, no matter who she chooses as her running mate. And while it would be nice to take Ohio or Virginia off the electoral map for Republicans, with a highly mobile population that gets its news from cable TV and the Web rather than local newspapers, once-powerful factors like home-state favoritism hold less sway than they once did.

More damningly, to make a cautious, poll-tested vice-presidential calculation would be to miss the whole point of this election cycle, which is that Americans are sick and tired of politicians making cautious, poll-tested political calculations. In contest after contest this spring, the brand of conventional wisdom that high-priced consultants can buy you proved meaningless. On the Republican side, voters elected a twice-divorced, crypto-racist reality TV star who had never run for office over 16 other candidates, one of whom was related to two former presidents and had amassed a $130 million campaign war chest. On the Democratic side, voters very nearly chose an avowed socialist who was not even an official member of the party until 2015.

The message of the 2016 primary season is loud and clear: Americans want change, which means they want what Bernie Sanders and Donald Trump are selling, even if they have deep reservations about the temperament and rhetoric of the men themselves. Hillary Clinton needs to hear that. The Democratic Party needs to hear that. And the best way for Clinton to let voters know she’s listening would be for her to set aside her differences with Sanders and put him on the ticket as vice president.

This would not be as big a lift as it might seem. As bruising as the Democratic primary contest has been, the disputes between the two candidates have more to do with tactics and scope than with actual differences on policy goals. Both Clinton and Sanders want to raise the minimum wage and force the wealthy to shoulder more of the tax burden. Both want to make health care and college more affordable. Both support campaign finance reform and a path to citizenship for immigrants. On all these issues, Sanders’ positions are more ambitious and his rhetoric is more incendiary, but if you filter out the nasty sound bites, they agree more than they disagree.

More than that, as political figures, they complement each other. Sanders has the feisty populist vision and aura of incorruptibility that Clinton so sorely lacks, while Clinton has the experience and gimlet-eyed policy chops that have eluded Sanders in his many years of howling in the political wilderness. Together, with Clinton suiting up to take that 3 a.m. phone call in the Oval Office while Sanders roams the country rallying the troops and shaming the Republicans, they could make a pretty good team.