The men I met on Christian Mingle: I dated the married, lonely and confused

I tried to convince myself I didn't want to have sex with him. I did. But was he who he said he was? 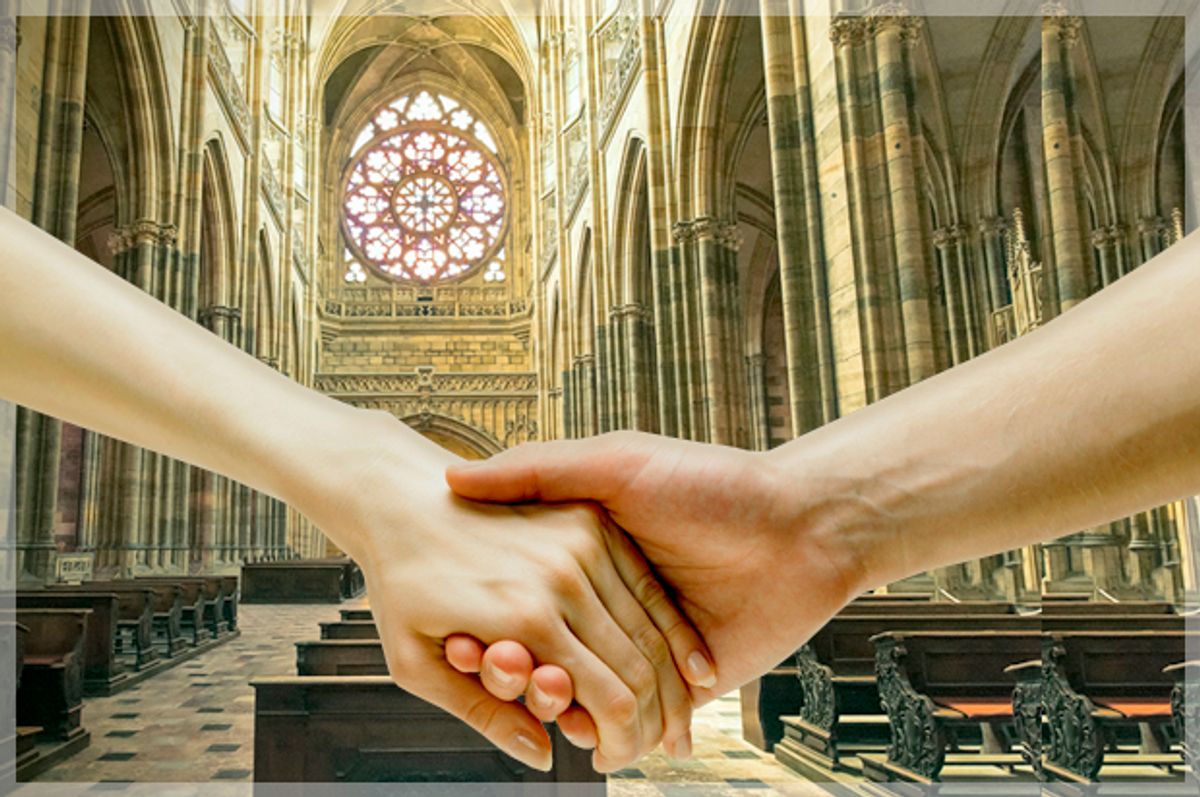 “Meet me at McDonalds. I have something to tell you.” When Patrick suddenly sent me this text, I knew it couldn’t be a good thing. Just three weeks before, I found his profile on the punchline of all religious dating sites, Christian Mingle. He was a divorced, non-smoking Catholic and Spanish-to-French translator in the textbook industry. Just over six feet tall, his credentials included photographs that were not blurry and taken by someone other than himself. He was handsome, wore glasses, was going slightly gray, and edged a little on the nerdy side: perfect.

I was a 33-year-old Lutheran deacon-in-training trying to convince myself I didn’t want to have sex with him, even though I did. A pastor’s daughter, my upbringing included the strict moral code of “no sex before marriage.” This code was promptly discarded in my teenage years, when I learned, all too painfully, why my parents had tried to protect me from being prematurely thrust into the turmoil of physical intimacy. In my late twenties, my live-in boyfriend dumped me and kicked me out of his apartment. I was convinced that God was keeping a tally of my sexual indiscretions and punishing me for them. Though I knew it would be hard, I vowed to live more chastely, determined to curb any libidinous activity until I was at least in a solid relationship with a decent Christian man.

On our first date, Patrick suggested we take a Sunday afternoon walk on the Highline after our respective church services. As I climbed the last of the steps to the top of the old train platform, I recognized him right away. He looked exactly like his photos and he hadn’t lied about his height; he was at least three inches taller than me, making him truly 6’1”. For a tall girl like me, heaven. Our walk along the Highline took on the flavor of a stroll on the Champs-Élysées. He taught me some French phrases and I tried to impress him with the few words I already knew. I sounded as if I were reading off the menu from Le Pain Quotidian, but he humored me with applause. “You’re accent is superb,” he said.

“Thank you,” I said, flattered. As we walked, he opened up, admitting that he occasionally still worked with his ex-wife, whom he met while studying in Mexico City. I imagined a sun-bronzed goddess in an off-the-shoulder peasant blouse. I pictured them sitting together at a desk, poring over social science proofs and speaking secret words to each other.

“When was your divorce finalized?” I asked him suddenly.

“It’s been a year,” he said, and steered me with his hand to a bench, brushing away dead leaves. That’s when I noticed a small, plastic ring he was wearing on his pinky finger, on an otherwise ringless left hand.

“Oh, that.” He played with the ring, turning it on his finger. “That’s a little promise I made between me and God. After the divorce I bought this ring in a junk shop, and told God that I wouldn’t take it off until I found the right woman.” I wanted to reach out, hug him, and tell him I understood. I knew how hard it was to be outside of a pair, especially in our faith. The people who wrote the Bible never expected modern Christians to stay single so long, or get divorced, for that matter.

We agreed to meet again a few nights later, and took a walk around his neighborhood in Washington Heights. The sun was just dipping below the horizon when we arrived at his church, Mother Cabrini on Fort Washington Avenue. We made out on the lawn in front of the building that held Mother Cabrini’s relics, and I couldn’t help but think that she might be able to see us – she is a saint after all – and it felt dirty and thrilling all at once.

“Hmm, you smell like cigarettes,” I said between smooches.

“Sorry,” he said, wiping his lips. “I have one occasionally. A habit I picked up in Paris.” I shrugged it off, but he had claimed to be a non-smoker, and the lie bothered me.

“Let me make you dinner,” I said. “At your place.” I was falling for him, and I could tell he knew it. He hesitated.

“What, have dinner?” I asked. But I knew he would expect more. And so would I, in spite of myself. I had been alone for a long time and I was looking to intertwine limbs with someone soon. He brushed his hair back, and I noticed the ring on his pinky was missing. “What happened to your ring?” I asked.

“Oh, right,” he said. “I was typing this morning and it flew off my hand and landed in the radiator. Can you believe that?” he laughed. I couldn’t.

It wasn’t long before the dreaded text message came. I asked myself, “What blouse do you wear to an awkward conversation?” I picked a powder blue shade the color of the Virgin Mary’s robes. Standing at the McDonald’s counter, Patrick looked like a sad puppy in a windbreaker. He bought me a McFrappe to soften the blow I knew was coming. We sat at a booth face to face.

He admitted that he was still legally married. Insert all of the usual excuses here: he didn’t love her, she didn’t understand him. Who knew what was true? All I did know was that this wasn’t the first time I’d been a nice Christian guy’s side-piece. And I was furious. But before going all Jodi Arias on him, I swung out of the booth and walked out with some of my pride intact.

Then I thought about my own fraudulent Christian Mingle profile, and how it was less true than I would like it to be. I hardly lived up to my claims of virtue, never admitting to cheating on my college boyfriend, or having an affair with a married man in my early twenties, or frequently refusing to give people change in the subway. If my profile had been anywhere near honest, it would have read, “I’m an emotional eater with self-righteous tendencies who has never even owned a proper pair of running shoes and has frequent sex dreams about my eighth grade math teacher.”

Patrick texted me the next day, begging me to allow him to explain why he did what he did. I thought about ignoring him, but decided to meet him in spite of the advice of my therapist, who told me to stay away. I figured this was the most authentic act of faith: to listen and forgive.

We met at a nicer restaurant across the street from the McDonald’s. He told me a long and perilous story about his bad marriage, his parents’ neglect. I didn’t know what was true and what wasn’t, but I listened. Patrick’s profile might have read “Married lonely guy looking for someone to talk to.” I doubt I would have liked him as much if I’d never gotten the opportunity to listen to him open up and tell the truth.

We hugged before we parted, and I didn’t hear anything from him again until the following Easter, almost a year later. “Just wanted to tell you I hope all is well with you. Happy Easter. God bless.” This time I didn’t reply to his text message. But I did say a brief prayer of thanks that my pride, and my faith in men, had once again been resurrected.