Behind the search stats, the hypocrisy, repression, secrecy and isolation in states with harsh anti-LGBT laws 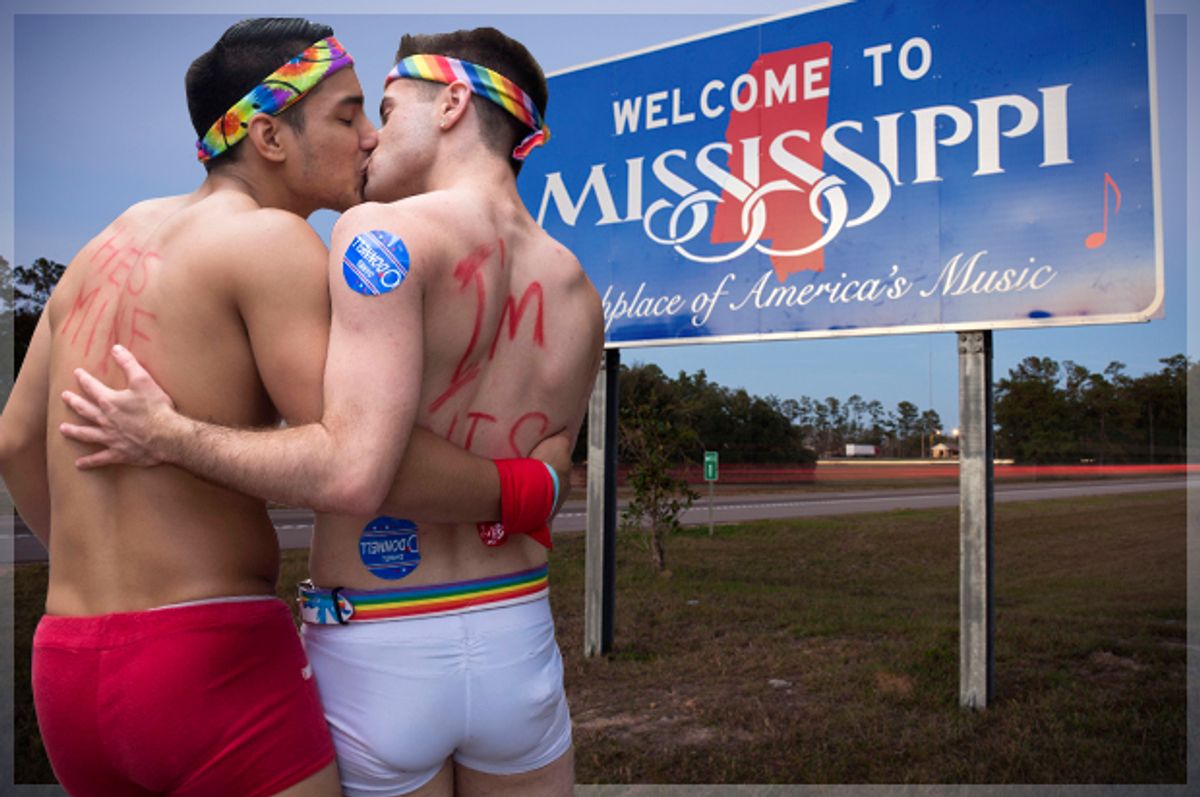 In March, North Carolina made national headlines when its state government called an “emergency session” of congress to push through a law that struck down local nondiscrimination laws across the state. In so doing, that legislation, known as House Bill 2, forced transgender people to use the public restroom that corresponds with the sex they were assigned at birth, rather than their gender identity. Mississippi followed suit a few weeks later by passing an even harsher “religious liberty” bill, HB 1523, that allows employers to fire LGBT people and businesses to deny them service based on “sincerely held religious beliefs.” North Carolina recently filed a lawsuit against the federal government to ensure its bill remains in place, after the Obama administration stated that HB 2 violates civil rights law.

Queerness has found ways to survive in some of the most repressive areas of the country for decades, often by living a kind of double life. In the seminal 1970s book “Tearoom Trade,” sociologist Laud Humphreys discusses the culture of underground sex that takes place in public restrooms and rest stops, often referred to as “tearoom sex.” In interviewing men looking for casual hookups in the relative privacy of public places, he found something surprising: A majority (54 percent) were married, and many were religious. Two men were even members of the John Birch Society, the extremist right-wing organization founded during the Red Scare of the 1950s. Humphrey writes that he had ‘‘the impression that ‘the Bible on the table and the flag upon the wall’ may be signs of secret deviance more than of ‘right thinking.’’’

In the decades since, the link between ideological conservatism and cloaking one’s innermost desires has abated little, but today most of that action takes place behind a computer, not in a bathhouse. A 2009 study from the Harvard Business School’s Benjamin Edelman found that “eight of the top 10 pornography-consuming states gave their electoral votes to John McCain in last year’s presidential election.” Research also showed that the 27 states that passed a wave of resolutions adding marriage bans to their constitutions in the mid-2000s consumed 11 percent more pornography than those that didn’t. Utah, the Mormon stronghold and fourth-most conservative state in America, placed at the top of the porn subscription heap.

The evidence on this subject is fairly overwhelming. Yet another study, this time from Cara MacInnis and Gordon Hodson in Archives of Sexual Behavior, in 2014 found that “red light states,” as Edelman called them, have higher rates of Google searches for “sex.” This isn’t just true of gay sex; those surveyed by MacInnis and Hodson were interested in all kinds of intercourse, which led the researchers to conclude that these searches had an educational component. “At minimum, these internet-search data clearly demonstrate,” the pair argued, “that those living in states with greater proportions of very religious or conservative citizenry nonetheless seek out and experience the forbidden fruit of sexuality in private settings.”

It’s easy to understand why: Those with a culturally conservative background may have no other means to explore their preferences. According to the Guttmacher Institute, 37 states currently mandate that their public school curricula teach abstinence-only sex education, meaning that youth are given few very resources when it comes to navigating intimacy. By the first time they have sex, just over a third of young people will have been shown how to use a condom in health class. Lacking appropriate, detailed information on the subject of intercourse, middle- and high-school students (and even adults) might have few other options than to turn to the Internet—which, for the record, is a very shoddy substitute for the classroom.

For others, porn may simply be a way of satisfying the most human of curiosities that can’t be met in communities where there might not be many other people like you. Cities like Birmingham, Memphis and Raleigh have some of the smallest gay populations of any state in the country, while North Dakota—where just 1.7 percent of the population identifies as LGBT—doesn’t have a single gay bar in the whole state. There was one in Fargo, but it closed several years ago. Men in North Dakota looking to hang out with and meet men like themselves have to go all the way to South Dakota. Club David, located in Sioux Falls, is six hours away. Otherwise, there’s Fame Nightclub and Club 200 in Winnipeg (yes, the one in Canada).

Gay bars and a thriving LGBT community aren’t just outlets to interact with people. They’re also possibility models. These establishments give queer people the ability to imagine that they can exist in environments where they might otherwise be invisible, but in many locations, such space remains an impossibility. In 2013, Pat “PJ” Newton tried to open a gay bar in Shannon, Mississippi, but the town blocked her from doing so. Residents organized a petition, which they presented at a local town council meeting. One protester told Newton, “I don’t want my son playing soccer anywhere near the bar.” The opposition to a gay establishment in town was so widespread than even Shannon’s mayor helped collect signatures to oppose it.

It’s no wonder that Mississippi, which an earlier study from 2014 found led the nation in gay porn searches, is flooding PornHub’s servers. In a state that remains overtly hostile to the very presence of queer people, what other resources do people feel like they have? After all, this is the same state that—in 2009—blocked a lesbian student from appearing in her high school’s yearbook because she posed in a tuxedo. The following year, Itawamba Agricultural High School, located in Fulton, went as far as to nix its prom altogether when a same-sex couple tried to attend the dance. Today Mississippi remains one of the most conservative states in the U.S., as well as one of the hardest to be out and proud in.

Chauntelle Tibbals, a sociologist and sex researcher, told The Daily Beast that “red light” states are “painting themselves into a corner” by further encouraging a culture of secrecy and fear around human nature. “[W]hen people are touting these very hard lines about what others should and shouldn’t be doing and then in their private lives they’re not doing what they say, that doesn’t surprise me,” she said. “because they themselves are putting boundaries around their own sexuality.” It’s no wonder that Edelman found that states with a high percentage of people who agreed with statements like “I have old-fashioned values about family and marriage” and “AIDS might be God’s punishment for immoral sexual behavior" had the highest number of Internet searches for sex-related subjects. When it comes to porn, shame and persecution are the ultimate clickbait.

If Humphreys once wrote that the men who proudly displayed their crosses on the walls used them as a “breastplate of righteousness,” it appears that armor is full of holes.