"A huge middle finger in the face of modern-day geopolitics" 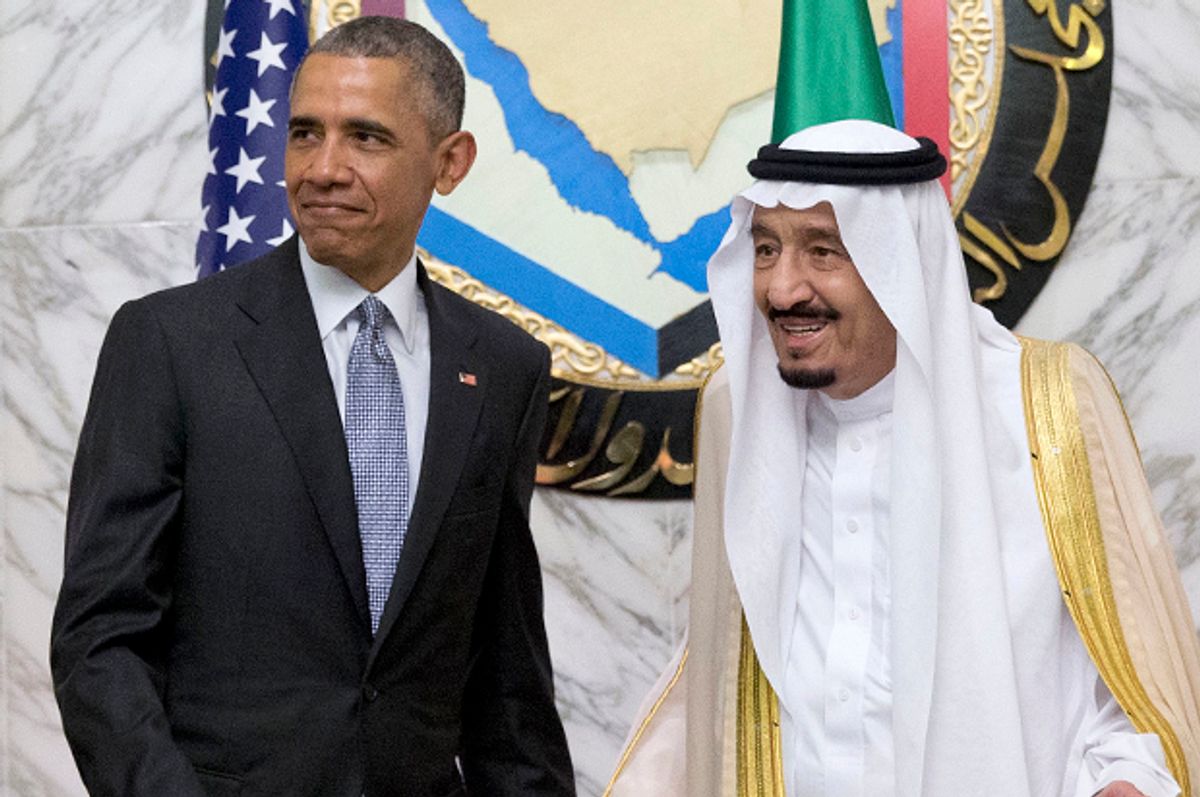 Restorative justice is an ambitious concept. It requires a perfect world in which all stakeholders to a tragedy are able to come together and resolve things in the aftermath of an egregious offense. In the utopia of restorative justice, the victim, her offender, and the community at large are able to, together, search for ways to repair and reconcile.

But real life is dystopian. And for the victims of 9/11 and their families, justice remains as elusive and out-of-reach as the perpetrators itself.

Since 9/11, there has been much conjecture and theorizing by conspiracists. One of the few constants in the murky world that is the post-9/11 era has been the identity of the hijackers themselves:  of the 19 terrorists, 15 were of Saudi nationality.

A recent series of memos seems to imply that these terrorists were not psychotic lone wolves emerging from distant desert caves to carry out a highly complex, deranged mission. For many, it is pretty much a well-documented fact at this point that, surely, the perpetrators of 9/11 had received at least some form of support from the Saudis.

This conjecture, treated by most as a fact, has led to an increased demand for the declassification of the notorious 28 pages of an 838-page congressional report (which allegedly highlights funds and connections between the terrorists and Saudi Arabia).

It has also bolstered longstanding attempts of 9/11 victims and their families to seek legal remedy against their offenders.

The Justice Against Sponsors of Terrorism Act (JASTA), which received Senate approval this week, is being pushed through the system in order to do just that.

According to co-sponsor senator John Cornyn, the bill’s purpose is to send the unequivocally loud and clear message: the U.S. “will combat terrorism with every tool we have available, and that the victims of terrorist attacks in our country should have every means at their disposal to seek justice.”

JASTA will accomplish this by granting the right for private plaintiffs -- victims of 9/11 and their families -- to sue the foreign government of Saudi Arabia for any possible role it had in the September 11 attacks.

A Middle Finger to Geopolitics

State sovereignty is an absolute. It is taught in law schools as the most basic of principles: a foreign sovereign cannot be sought in a domestic judicial proceeding (with the exception of commercial matters). Yet, this is exactly what Senate is allowing to happen by voting in to make JASTA the law.

The complexities of what JASTA would do for the diplomatic relations of the U.S. and Saudis -- two longtime allies -- along with the economic ramifications (Saudi Arabia has threatened to sell up to $750 billion of its assets in the U.S.) is well beyond both the scope of this article and the ambit of my knowledge base.

But, as an international human rights lawyer, my knowledge base permits me to make the following statement. A law like JASTA is a huge middle finger in the face of modern-day geopolitics.

Proponents of the bill are quick to point out that JASTA is restricted in its application to cases “arising from terrorist attacks that kill an American on American soil.” Not only does such a restriction smack of American entitlement and elitism because it’s basically circumventing the sovereignty of all the planet that is not America but we are also possibly setting up for a hammer to fall flat on our own foot. Hard.

Opening up a local court to air international grievances sets a dangerous, uncontrollable, and previously untested precedent. We would be obtuse to assume that by allowing victims of 9/11 to pursue a civil remedy against Saudi Arabia, other countries - and there are many that would characterize their grievances against the U.S. as acts of terror - would not enact similar legislation and initiate civil lawsuits for acts perpetrated against them by the American government.

JASTA: Not the First of Its Kind

JASTA is not the first of its kind. A quick scroll through the annals of recent U.S. history and we see that the American government has, or has attempted to, on more than one occasion, deliberately sidestep international law and treaties to further its own domestic agenda.

The post-9/11 era provides a most recent example.
Prior to the May 2011 raid on Osama bin Laden’s compound in Pakistan, four White House lawyers were given a top-secret task to prepare arguments to ‘shape and justify Mr. Obama’s high-stakes decision’.

The White House knew that the daunting task of putting ground forces on Pakistani soil without Pakistan’s consent, authorizing a lethal mission, then immediately disposing the body of a wartime enemy at sea - all the while not telling Congress beforehand about any of it - would be a recipe for major legal backlash rooted in principles of international law.

Generally, when two countries are not at war (for example, the U.S. and Pakistan, which are, in fact, longtime allies), international law forbids one from using force on the other’s soil without consent.

But the U.S., which suspected Pakistani intelligence services were sanctioning Bin Laden’s presence in Pakistan, was not about to bother asking the Pakistanis if it could swing by in the dead of a night on a lethal kill mission.

Instead, the lawyers created ways for the unilateral military incursion to be lawful. After all, what is the task of a lawyer if not to tailor the law to her client’s benefit?

It was a legal stretch, to say the least. But America made it work. And now -- pending a decision from the current (but nearing-its-sunset) administration -- it seems America just so might make it work a second time with the enactment of JASTA.

Maria Kari is a Canadian lawyer and freelance writer currently based in Florida. She writes often about Asian and Middle Eastern politics and Islamophobia in the West. Her work frequently appears in The Nation, NPR, Rabble Magazine and Pakistan's Dawn News and Express Tribune.