Farewell, once-favorite organ: I am officially breaking up with my penis

How did this happen? I hate my penis. We were inseparable for years. Now it just brings sad, awkward frustration 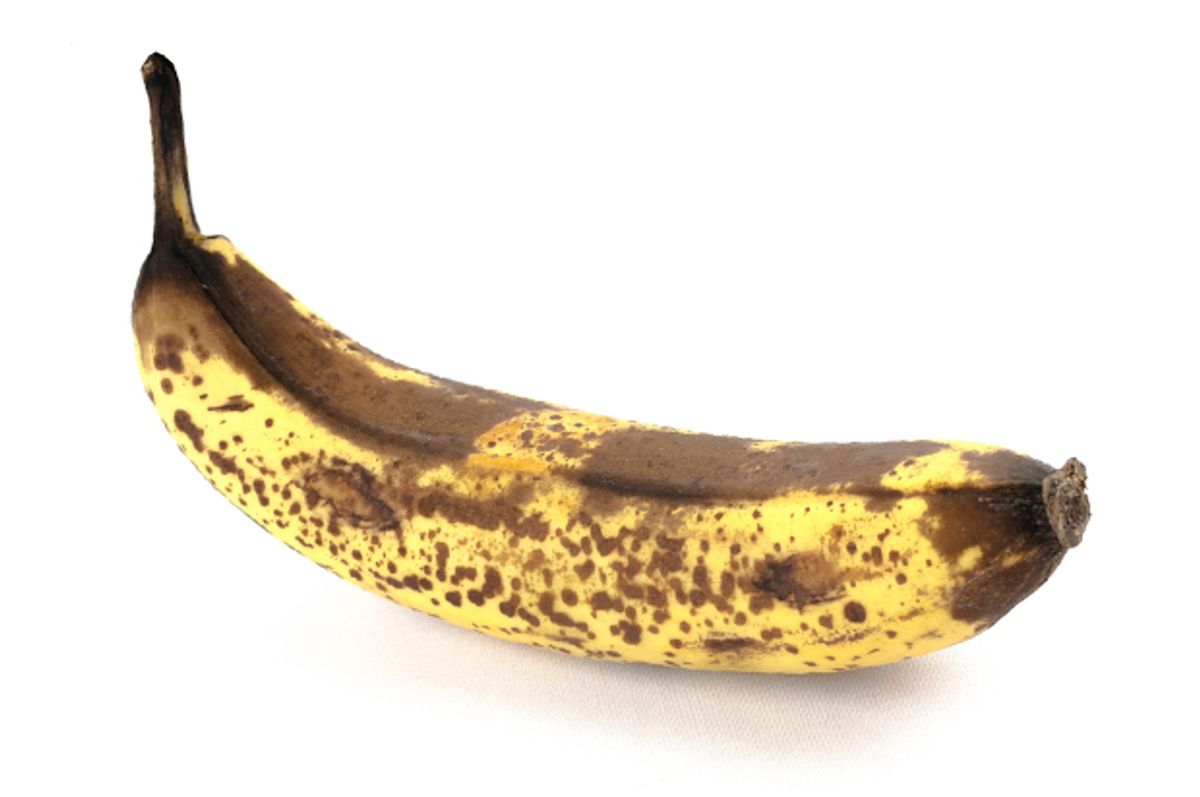 Like virtually every member of the male species, from Neanderthal Man to whatever Glenn Beck is, I grew up absolutely in love with my penis. This couldn’t be helped. It’s an occupational hazard. You start out as a boy, merely curious about that funny little circus peanut between your legs. If you don’t yet delight in its form, you’re certainly pleased by its function. Which is awfully important, whether you’re whizzing in the school bathroom or snuffing out a campfire in the woods.

The affection continues as you hit adolescence. Maybe because you and your penis are inseparable. You go everywhere together. And as you hit manhood, it starts to have a sensational side benefit. When sex is new and your partner compliments this organ, your pride of ownership goes off the charts. You feel, by simply having this sensitive, shapely appendage, that you’ve won the genetic lottery. I mean, who but the most jaded jerk, could ever tire of having an orgasm? However, there’s a huge spoiler alert that people rarely mention. Nobody warns you about becoming middle-aged, as I currently am. Which is when you start to incur serious problems with your once beloved penis. Problems so plentiful and painful, they probably even piss off the Dalai Lama.

That’s what it’s come down to for me. I now officially hate my penis. I’m sick of my dick. It is no longer a magical joystick. It’s more like that banana you lost months ago and just discovered behind the toaster. It’s dark, mushy and of no use to anyone. It’s prey to disease, infection, dysfunction. In other words, the middle-aged schlong works about well as our current Congress.

“There’s no doubt it’s a complicated piece of equipment,” my urologist told me after a recent scare I had with my former BFF. “From your teens to your middle 30s, it’s usually trouble-free. But if you make it to 40, things can get bumpy. Your penis is vulnerable to a host of malfunctions that make you miserable. After years of treating them, I’ve decided that men’s dicks might be an accident of evolution. They’re too complicated and full of design flaws. You can get cancer of the testicles, prostatitis, balanitis, Peyronie’s disease, Phimosis, Paraphimosis. And that’s just for starters.”

I couldn’t help but sadly shake my head. That simple, enjoyable organ between my thighs, which was once as beautifully-functioning as a German automobile, was now more akin to a goddamned DeLorean. Sure, my dick was comely and could go a lap or two around the track. But after too much use, it proved to have serious transmission problems and (as in an automobile article I read) had “a random tendency for the shaft nuts to unscrew themselves...dumping gear oil all over the road.” Okay, that’s metaphorical. But not by much.

“Remember how much fun your dick was when you were young?” my friend Nick asked over coffee. “You could get en erection just by channel surfing and catching a glimpse of Judy Jetson. Sex used to go on for hours! Hell, I don’t even remember peeing back then. But I must have. Otherwise, I would’ve swelled up and exploded over Morristown. These days, if I need a hard-on to have sex with my wife, she has to time me with a freakin’ calendar. I swear, I have more tenderness and intimacy with my urologist. I should just have the damn thing taken off and put in a penis museum!”

I offered no argument. It took every ounce of restraint I had not to blurt out, Hey, I’ve got my own troubles!

Sometime after 40, I started taking so long to pee, I was probably the only guy you ever saw at a urinal, holding his junk in one hand and a volume of Proust in the other. I’d awake several times in the night to go, usually so sleepy and blind, that I’m probably the first fella whose urinary problems resulted in several broken toes. Plus, my discussions about the the damn thing became a terrible game of Choose The Right Acronym. I had to remember that BPH was infinitely better than BPA. I had to to get used to the fact that PSA now stood for Prostate-Specific Antigen, not Public Service Announcement. And I peed so frequently, it seemed I also had OAB. In other words I felt absolutely FUCKED! I began watching those 2:00 AM commercials for quack cures that would shrink my prostate. Which sounded promising. Except the side effects might include kidney malfunction, internal bleeding, abnormal heartbeat, and blindness. Still, I considered taking those supplements. And hiring a seeing eye dog to lead me to the toilet every day.

Then, disaster struck. Which nearly killed me. But ultimately resulted in my being a bit more philosophical about that hopeless hot dog dangling between my legs.

One weekend, not long ago, I went from peeing poorly to not being able to pee at all. Apparently, I had the perfect storm of an enlarged prostate, a bladder infection and, because they’re part of the same union, my kidneys decided to go on a sympathy strike. The pain was insurmountable. And through the night I went from being terrified that I would die to terrified that I wouldn’t. I’d like to take the opportunity now to tell God and Jesus I’m really sorry for the things I screamed at you that night. I was just so sick. And you’re both a couple of swell fellas.

I crawled into the urologist’s office the next morning, walking like Quasimodo, cursing like Joe Pesci. First he catheterized me. Which is like someone taking your temperature by shoving a thermometer where thermometers were never meant to go. I was then put on medication for a swollen prostate and an infection of my urethra. Still, the doc had to warn me about a certain procedure that would have to be performed if the medicine work.

“If this doesn’t do it, Peter,” my urologist said, “We’ll have to perform something called ‘PVP’ (another acronym!), which stands for photoselective vaporization of the prostate.”

I was understandably alarmed. Especially over that word “vaporization.” I thought it meant they were going to zap my precious organ with some futuristic device and send it into another dimension. I told my doctor I was fed up with this malfunctioning organ of mine. But I wasn’t ready to have it sheared off and shot into space. He assured me this procedure just meant he’d “use a laser to destroy some of the prostate tissue and allow you to urinate more freely, with less pain.” This explanation wasn’t soothing. I imagined that scene from Goldfinger, where 007 is strapped to a table, while a laser inches toward his dick. And the villain chortles, “No Mr. Bond, I expect you to die.” I was assured it wasn’t quite so fearsome. Although the doctor did chuckle after saying this.

Luckily, it never came to that.

Thanks to the medications, within a week, I’d moved from the injured to the starting list. Which meant that my prostate was now a healthy walnut size again. Apparently, after resembling a casaba melon. Of course, until the shrinking was complete and the infection gone, I still found urination so painful, I had to bite a rag while I peed-like someone having a bullet removed in an old Western.

The question remains, however: has it been worth it? Having a dick? Were a few years of sexual marathons and being able to pee hard enough to put out an oil fire worth what I was going through now? Or should I just start sleeping with my own personal Lorena Bobbitt? Give her a sharpened knife and let her fix my problem permanently?

It’s been two months. And yes, the old cocktail wiener is functional again. Of course, I haven’t tried sex yet. But at least now, I don’t head to the toilet at 5 p.m. and finish at sunset. Still, I’ve grown sort of sentimental about my penis. I’ve had it for so long, it feels like a part of me. It’s done great work and made me very happy-at times. In other words, just because Wade Boggs doesn’t step up to the plate anymore, doesn’t mean he’s thrown away his bat, right? So, I’ll soldier on with Old Mr Johnson. With its PBH. And keep getting updates on my PSA and those other scary letters, which one day are bound to spell disaster. In other words, I’m not quite ready to write off my dick. It’s not much, but it’s all I have. And sometimes, I have a little bit of optimism about the thing. That this organ may, someday, again provide me with pride. Or, at least, pleasure. In other words, when it comes to my penis? I’d like to think I’m not quite done with it.