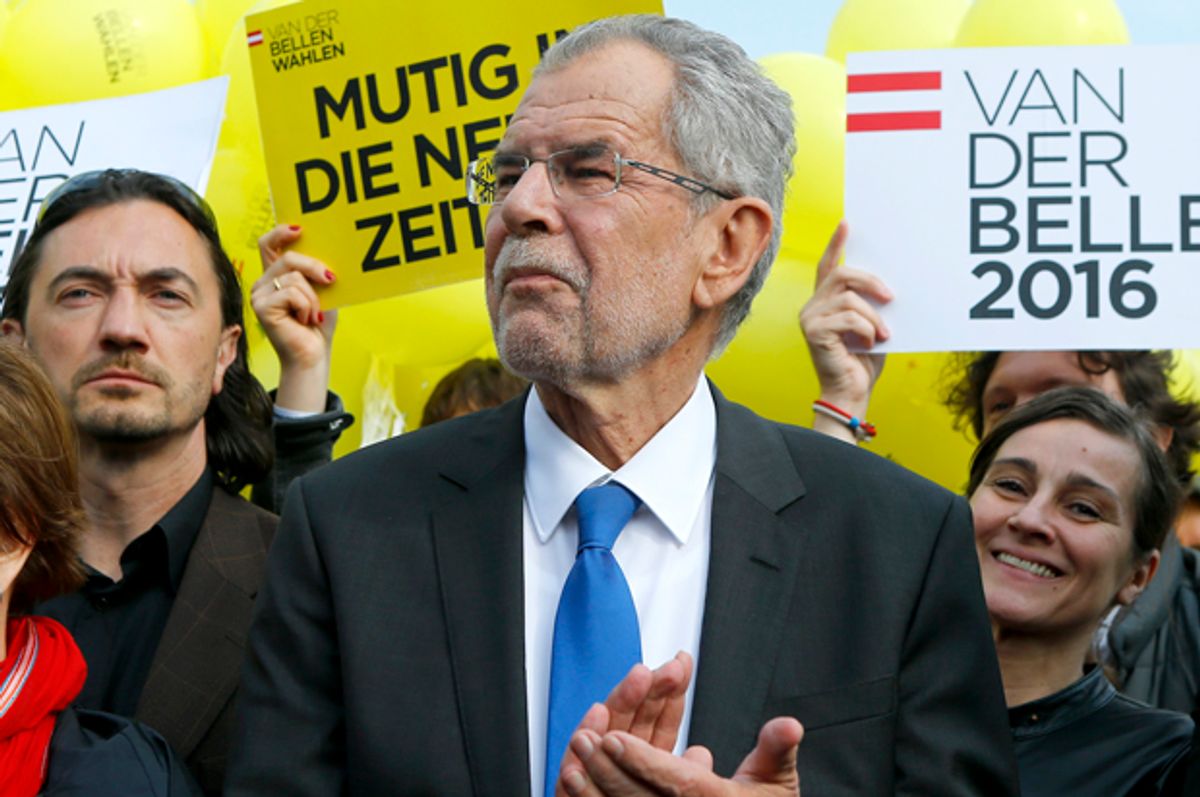 President-elect Van der Bellen, 72, led Austria's Greens for a decade. Some are calling him the world's first elected Green head of state.

Hofer would have been Europe's first overtly far-right head of state elected since the end of World War II. He ran a xenophobic, anti-migrant campaign, exploiting the ongoing refugee crisis.

"The rhetoric in the campaign had been fierce at times," BBC noted.

Van der Bellen insisted Austria should not be "the first country in western Europe led by a populist right-wing, pan-Germanic fraternity member." He asked voters "who don't like me but perhaps like Hofer even less to vote for me."

Hofer had worn the German colors of the far-right, nationalist Marko-Germania student fraternity. At his swearing-in as the Freedom Party presidential candidate, BBC noted, Hofer wore a cornflower in his lapel — a Nazi symbol in the 1930s.

Reuters pointed out that the far-right Freedom Party "has its roots in Austria’s Nazi past, a history the country has not confronted as openly as Germany."

Hofer helped draft the new hyper-nationalist Freedom Party manifesto, which maintains that Austria must preserve its “identity” — "that’s code for native Austrians, not immigrants or their children," British right-wing newspaper The Telegraph reported.

The Austrian presidency is a largely ceremonial position. Most of the power is concentrated in the hands of the chancellor. Yet the president can potentially play a bigger role in politics than they have traditionally.

President-elect Van der Bellen says he will address the increasing "divisions" among Austrians, at a time of rising xenophobia and racism.

"People can be different and still treat each other respectfully," he added.

Van der Bellen, a retired economist who taught at Vienna University, is the first environmental activist to become president of Austria.

Molly Scott Cato, a British member of European Parliament and a Green herself who has seen the secret trade pact, has said TTIP is an Orwellian agreement written by and for corporations.

The Freedom Party said it was optimistic about the election results, adding "we are very, very well placed for parliamentary elections."

Hofer wrote on Facebook, " The effort in this election campaign is not wasted, but is an investment for the future."

France's far-right National Front party, which was founded by a Holocaust denier and has established itself as one of the country's biggest parties, applauded its fascistic parallel in Austria.

"This historic performance is certainly the precursor of future success for all patriotic movements, both in Austria and around the world," the National Front said.