Bernie insults voters: He must drop notion that everyone who disagrees with him is corrupt or a dupe

Sanders refuses to admit he lost, instead sticking to the idea that he wasn't given a fair shot by the voters 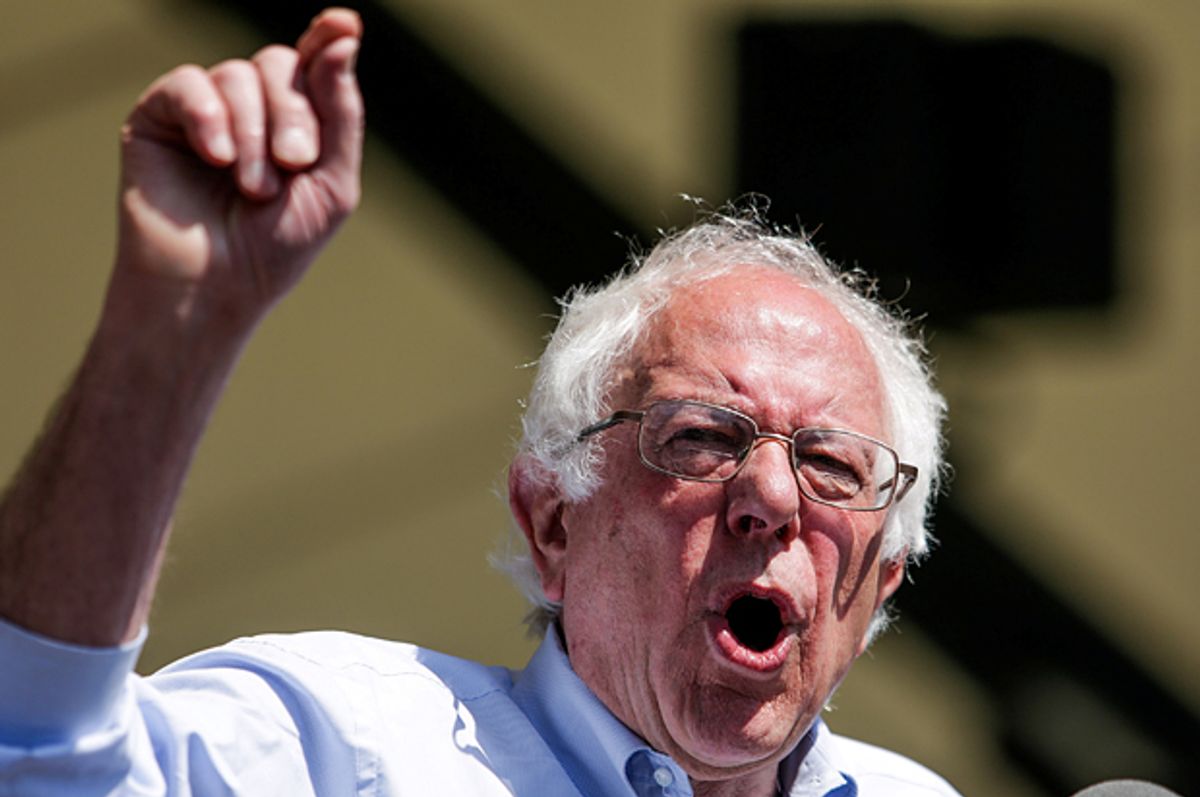 The Bernie Sanders campaign has injected a lot of welcome aspects of lefty thought into the national discourse this election cycle: An emphasis on income inequality, a discussion on how to rebuild the declining middle class, a reminder that almost none of the bankers who destroyed our economy paid for their crimes.

Unfortunately, Sanders is also injecting one of the most wrong-headed and frankly embarrassing aspects of lefty thought into our discourse: The tendency to dismiss people who disagree with you as dupes who have been misled by a shadowy cabal of evil masterminds who brainwash the masses in order to perpetuate economic injustice.

This is the premise of Sanders' "political revolution" argument: That the only reason voters hadn't backed a socialist in the past is they never really had a chance to. But once they heard the good news about democratic socialism, they will throw off their shackles, embrace the truth, and usher in our socialist paradise.

That sort of rhetoric is harmless enough when it's a pitch to win over voters. But now Sanders is losing the nomination. Rather than accepting the possibility that the voters heard his pitch and disagreed with him, however, Sanders has started to dismiss his loss as inauthentic, the product of shadowy forces misleading the easily duped voters rather an an authentic rejection, by the voters, of his ideas.

The implication is loud and clear: The people are somehow being denied a choice, and if they were just allowed to vote for him, they would.

He made this implication even clearer when speaking with Jake Tapper on CNN  on Sunday. "I am the stronger candidate because we appeal to independents, people who are not in love with either the Democratic or the Republican Party," Sanders argued.

To hear Sanders talk, you'd think the public hates these parties and that the only reason they win almost all elections is that the people are denied an alternative.

To which I say hogwash. In the year 2000, Ralph Nader ran on a similar platform to Sanders, but as a third party candidate, making him the alternative to voting either Democratic or Republican that Sanders is speaking of. Nader got less than 3% of the vote. It was enough to tip a close election towards George W. Bush, but it's also so paltry that it debunks the claim that the people would back a lefty alternative to the main parties if only The Man would let them have a chance.

Moreover, the notion that independent voters are really a thing is mostly a myth. While 42% of voters do identify that way, more in-depth research shows that the vast majority of them vote consistently for one party. The popularity of identifying as "independent" almost certainly has more to do with the American fetishization of individualism and people's desire to feel like unique snowflakes, and has nothing to do with a sincere rejection of both the parties.

The fact of the matter is that Sanders has been campaigning for nearly 13 months now. He not only had a chance to make his pitch, but he had a chance to make it to the most sympathetic audience possible: Democrats, who already lean left and are far more open to the concept of socialism than the country as a whole.

Democratic voters had months to hear and consider his theory of change, and the majority of them voted for Hillary Clinton anyway. At a certain point, one has to consider the possibility that she just had a more appealing pitch to the voters.

But Sanders seems unwilling to admit this, instead resorting to insinuations that the game has been rigged against him. During the CNN interview, Tapper kept pointing out that Clinton has straight up won the majority of votes in the primary contest, but Sanders kept changing the subject to the super delegates. Why do that, if not to imply, falsely, that the will of the voters is being thwarted?

Sanders is butting up against empirical reality here, which has disproved his theory that a democratic socialist would win if only given a chance. But instead of revising his theory, he's digging in, making increasingly convoluted arguments to explain away what is quite clearly just a straight-up debunking of his theory of politics.

Sanders has long been a proponent of this belief that the voters only reject the socialist revolution because they are duped by the system. In November 2014, he gave an interview to NPR where he argued that the reason that white working class voters prefer Republicans to Democrats is not because of a genuine conservatism, but because the Democrats don't do enough to push for economic justice.

The problem is that working class people of color, who tend to need economic justice even more than white people, don't seem to fall into this trap. Sanders was dismissive of this objection, arguing that African-Americans were mostly excited by "an African-American president" and Hispanic voters were voting against a Republican party that "has been strongly anti-immigration". The one thing Sanders clearly won't accept is the possibility that people vote for Democrats because they like Democrats.

Not that Sanders thinks that votes for Republicans are authentic, either. Back in March, he told Rachel Maddow that only "5, 10 percent " of the voting public is authentically Republican, and the rest of their voters are simply duped because the media is unwilling "to look at what the Republicans actually stood for rather than quoting every absurd remark of Donald Trump."

(Never mind that Trump's absurd remarks are an excellent synecdoche for the racism, sexism, and hawkishness of the Republican party.)

Sanders likes to portray himself as the champion of the little guy, but his theory of politics is elitist. His rhetoric paints everyone who disagrees with him is either a sell-out or a dupe who doesn't know what's really good for them. And that, in turn, is breeding paranoid, vindictive behavior from Sanders and his camp, who are unwilling to accept the possibility that he lost the primary in a fair fight.

In reality, most people who disagree with Sanders are not bamboozled or corrupt. In most cases, they simply have different priorities or values. Republican voters aren't being tricked by the Republican party into voting against their own self-interests. If the party was that good at manipulating the voters, it's impossible to imagine Trump would be the nominee. No, they really are conservative and put a value on maintaining racial and social hierarchies over policies that would improve their economic wellbeing.

Nor are Democrats somehow cheating some silent majority of socialists out of the nominee of their choice. Sanders had a chance — he even outspent Clinton for most of the primary race — and the voters just had more faith in Clinton's theory of political change. If Sanders is as big an advocate for the people as he claims to be, he really should work harder at respecting their intelligence.